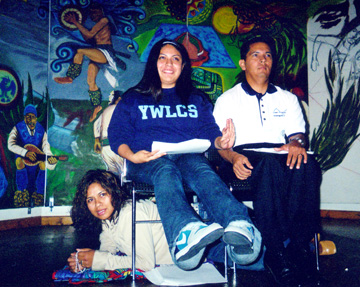 Sixteen-year-old Roman Molina learned a lot last year that most high school freshmen don’t. He learned to wear a suit and tie and schmooze at business meetings. He learned to give an hour-long presentation and take hard questions.

“I learned to take responsibility for myself,” he says. “I acted mature.”

Molina learned these things through a combination of self-directed, coached study and working two full days each week with a mentor at The Resurrection Project, a community development organization in Pilsen. The unusual program is actually his unconventional high school’s curriculum. Big Picture High School in Back of the Yards intentionally breaks down the traditional separation between school and the outside world, blending classroom learning with out-of-school internships. It is one of three schools in the city modeled after Big Picture.

The school’s motto, “personalized learning, one student at a time,” reflects the philosophy of the model’s founders, two noted New Hampshire educators who teamed up with the Annenberg Institute to design the prototype Big Picture high school in Providence, R.I. The first graduates of that school, known as The Met for Metropolitan Regional Career and Technical Center, all were accepted to college, though some chose not to go.

Big Picture gets high marks from education experts for motivating students by making learning relevant and for its emphasis on building personal relationships with students.

However, some question whether students pick up the high-level skills they need for college entirely through internships and projects. “It may be you really do need an algebra class to learn algebra,” says Michael Cohen, president of Achieve, a think tank in Washington, D.C., that advocates raising state standards and accountability and preparing all students for college.

Despite these concerns, Big Picture is expanding rapidly and nationally. As the Met’s first graduates walked across the stage in 2000, the Gates Foundation donated $3.5 million to Big Picture to replicate the schools elsewhere. Currently, Big Picture operates 23 schools across the country; two of them are in Chicago.

Two of the new schools—one in Back of the Yards, the other in the Williams Multiplex on the Near South Side—have been open for a year. Students at both schools have personalized learning plans that guide their in-school projects and outside internships.

At Back of the Yards, Mondays, Wednesdays and Fridays are devoted to in-school activities. Students begin and end their days in conference with their advisors (who are certified teachers), first to agree on what work to do on their independent projects, then to report back on how much was accomplished. In between, students work on their projects, and participate in physical exercise, independent reading and group lessons like reading Elie Wiesel’s Holocaust memoir, “Night,” and discussing it. Tuesdays and Thursdays are reserved for internships, where students are assigned to work with a mentor who, in turn, keeps in regular contact with the students’ advisor.

Teaching math through projects and internships is challenging, Principal Alfredo Nambo admits. “We need to work harder on that.” A consultant from Big Picture headquarters is helping advisors here incorporate math into projects and lessons.

Molina’s experience illustrates both how weak entering freshmen’s math skills can be and how projects and internships can improve them. Over the course of his 10-week internship with the Resurrection Project, Molina went from being unable to read a measuring scale on a floor plan to teaching a fellow student to use Excel spreadsheets.

“I understand numbers more,” he says. He credits his mentor, Cesar Nuñes, for relentless pushing and making him develop budgets for a summer basketball league. Nuñes also had Molina borrow a math textbook and work through problems.

Another student picked up research and writing skills during an internship with a pediatrician who needed a brochure on the health benefits of breastfeeding to give to new moms. The student also learned a bit of chemistry by studying the composition of breast milk and how it differs from infant formula. “It’s a real project that somebody is going to use,” advisor Mayra Almaraz notes.

Losing a teacher is half of faculty

The other year-old Big Picture high school at Williams suffered a set back mid-year when one of its two advisors left. “We will not open a school with two advisors any more,” says Charly Adler, who worked with both schools last year as an academic coach for Big Picture schools. Instead, each will hire four advisors, which will also address a CPS requirement that high schools employ teachers who are certified in four core academic subjects.

In August, a third Big Picture-inspired school, City as Classroom Charter School in Pilsen, opened its doors. Founder Lisa Arrastia notes the school will borrow heavily from that model—”We’re doing the long-term internships and the projects”—but will also take cues from progressive, independent schools like Francis W. Parker, where she formerly worked.

CPS officials concede Big Picture is a radical departure for the district, and farther out on the continuum of high school reform. “Many people feel the only way to judge the model is to give it four years,” observes Jeanne Nowaczewski, CPS chief officer of small schools.