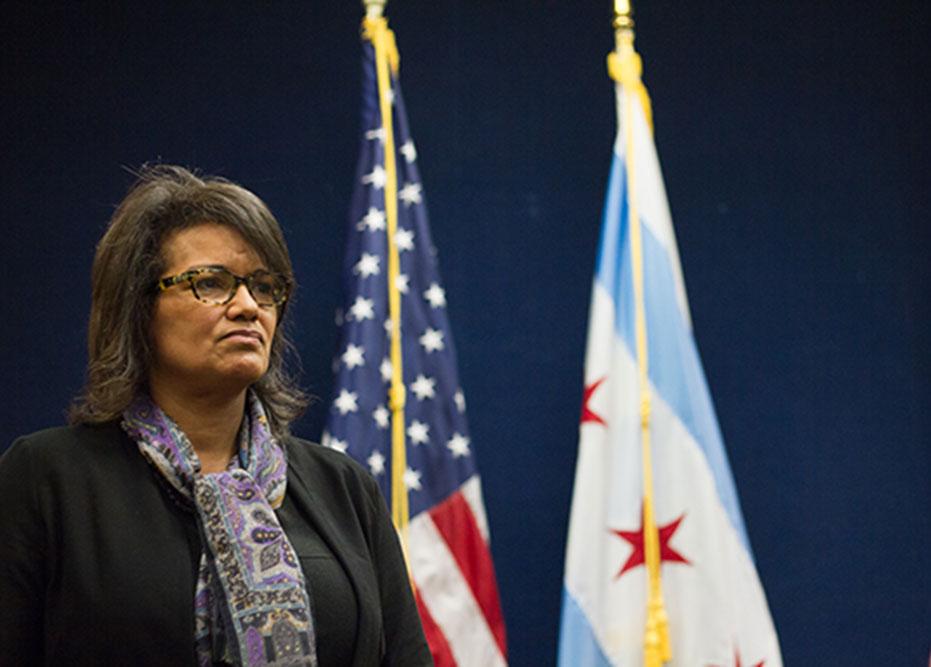 Sharon Fairley was appointed head of IPRA during political fallout after the release of the Laquan McDonald shooting video.

Two years after the 2012 death of Philip Coleman while in police custody, the Independent Police Review Authority found no wrongdoing by the officers involved.

But the city released a graphic video last year, showing that Coleman was shocked repeatedly by police with a Taser while in a lockup cell, then dragged from the cell and down a hallway while handcuffed and shackled. The video sparked another investigation by newly appointed IPRA chief administrator Sharon Fairley.

That investigation ended Wednesday with a striking reversal from the previous finding, recommending suspensions of 28 days to 120 days for six Chicago Police Department employees involved in Coleman’s death. Coleman, a University of Chicago graduate who had been suffering from a psychotic episode when his parents called police for help, was also hit with a Taser 13 more times and repeatedly beaten with a baton at Roseland Community Hospital. He died at the hospital after being given a sedative.

The suspensions—28 days for two officers, a sergeant and a lieutenant; 90 days for a civilian detention aide; and 120 days for another sergeant—now go to CPD Superintendent Eddie Johnson, who has 90 days to decide whether to pursue the charges. If he agrees, suspensions of more than 30 days then go before the Police Board.

IPRA said it would have recommended dismissal for a third sergeant who retired in February 2014, and asked instead that the superintendent “take any and all action to prevent him from future employment with the City of Chicago.”

With the recommended suspensions and the recent findings of wrongdoing in two police shootings, Fairley appears determined to shake IPRA’s reputation of letting officers off the hook too easily, even as the agency’s fate is already sealed. Mayor Rahm Emanuel has said he plans to disband IPRA and replace it with a new police oversight body, though he hasn’t publicly outlined exactly what it will look like. Several different measures have been introduced in city council, and aldermen have been holding community meetings over the past several weeks to get public input. Three ordinances have been proposed so far to overhaul police oversight in Chicago. Click here to enlarge.

IPRA’s impending demise hasn’t seemed to deter Fairley from trying to change the perception that the agency is not serious about police misconduct. In the eight months since Fairley has been at the helm, IPRA has found three officers responsible in fatal police shootings, compared to only two officers in the previous eight years.

“I don’t see myself as trying to prove that IPRA can be stronger,” Fairley said in an interview Thursday. “I think we’re trying to demonstrate that we can do a quality job and call the balls and the strikes in a fair way.”

Even so, the suspensions in the Coleman case highlight a shift for IPRA under Fairley’s leadership toward harsher penalties, including firings, for officers who are found responsible for misconduct.

From 2012 to 2014, IPRA recommended firing for 7 percent of officers found guilty of misconduct, according to an analysis by the Community Renewal Society (Disclosure: CRS is the parent organization of The Chicago Reporter). But from January through June this year, IPRA has recommended firing in 25 percent of cases in which misconduct was found. Percy Coleman, the father of Philip Coleman, works as a parole officer with the Illinois Department of Corrections in the Woodlawn neighborhood.

But for Coleman’s family, that still isn’t enough.

“What kind of suspension can you give for killing somebody?” he said. “It’s not enough, and it’s not even worth talking about.”

Coleman and his wife, Lena, settled a civil rights lawsuit against the city for $4.95 million in April. During discussion of the settlement in the finance committee, the video in the case prompted wide criticism by aldermen, even from some unexpected corners.

Ald. Ed Burke, a former Chicago cop who rarely says a negative word about police officers, called the officers’ behavior “an insult to our profession.”

IPRA’s latest report found that the officers’ biggest error was not their use of a Taser, but their failure to recognize that Coleman was in need of mental health treatment, not arrest and lockup. To that end, Fairley recommended several policy and training changes, including providing Crisis Intervention Team training to all supervisory officers and setting new directives for working with uncooperative arrestees, especially those in clear need of mental health treatment.

This represents another significant change in focus for IPRA in recent months: a renewed attempt to influence department policies and training based on findings from investigations.

“What I’ve said from the beginning is that I felt that the agency had a much bigger opportunity to be a positive catalyst for change in the department through policies,” Fairley said.

There’s a practical reason for that. If implemented, those recommendations will outlive both the officers’ suspensions and IPRA itself.