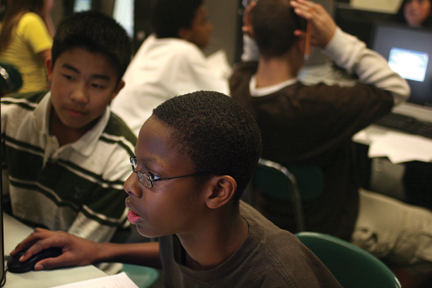 Like many things in Plainfield—a booming suburb 30 miles southwest of Chicago—Heritage Grove Middle School is new. Of the 26 schools that make up Plainfield District 202, 16 were built in the last decade. Many of the students are new as well: The district enrolls 9,500 more children today than it did just five years ago, a 60 percent increase and the biggest growth spurt of any school system in the six-county metro area. Around Heritage Grove is the evidence of Plainfield’s growth—spacious single-family homes that have replaced mile-upon-mile of farmland.

A spike in diversity is also taking place in District 202. Since 2003, Latino enrollment is up 3,200 students and African-American enrollment is up 1,100 students, increases that outpace all other metro-area districts. The percentage of low-income students, though still small, has nearly tripled. English-language learners have increased six-fold.

In celebration of this burgeoning diversity, flags from across the globe hang from the lunchroom ceiling at Heritage Grove. Every student’s ethnic background is represented, including a Chinese flag that Principal Steve Diveley hopes will help two of his most recent arrivals feel at home.

Against this backdrop, the district is trying to forge beyond past discord and is focusing on revamping its curricula to close the achievement gap between white, black and Latino students.

That gap is not as dramatic as in other communities, but hits African-American students worst: White 3rd-graders scored 18 points higher than African Americans and 7 points higher than Latinos in 2007. The percentage of students meeting state standards is on the rise among all groups, but black students lag furthest behind.

There’s also evidence of an achievement slide among Latino students. In 2004, some 48 percent of Plainfield’s 5th-grade Latino students scored higher than the state’s median score on reading tests; three years later, when most of these students were in 8th grade, the percentage fell to 39.

“We’re doing so much to try and address achievement gaps,” says Michael Kelly, a School Board member who is also active with the Plainfield Alliance to Nurture Diversity Awareness, a coalition of local business, government, religious and educational leaders started in 2007. Members want to see Plainfield become—like west suburban Oak Park, Kelly says—a model of diversity, where a good mix of people settle into a stable and supportive community.

Challenge to an ideal

Diveley, like most of the area’s principals, is white, as are 97 percent of teachers. The School Board is white. The superintendent is white. And this contrast between an increasingly diverse student body and an overwhelmingly white district staff has rocked boats.

Some parents say black and Latino students routinely face unfair discipline. And when the district fired its first African-American principal in 2006, the decision touched off a lawsuit and sorely challenged the district’s diversity ideal.

Lawrence Rainey, hired in 2005, was given charge of the new Liberty Elementary School in Bolingbrook—a poorer, more diverse town near Plainfield that lies partially within District 202 boundaries. District leaders say Rainey’s contract was not renewed because Liberty did not open in a timely, efficient manner. Rainey, a former Chicago Public Schools administrator, countered that he was underpaid and given less time and fewer resources to get the school up and running, compared to white principals. Rainey filed a still-pending discrimination lawsuit in January 2006.

Kelly says the fallout spurred the community into action, including the creation of the Plainfield Alliance. It also heightened the community’s interest in the district’s work with the Kaleidoscope Group, a consulting firm based in Chicago that was hired to assess diversity issues in the schools.

Last August, Kaleidoscope released an internal audit—based on interviews with key educators—that praised the district for its willingness to address the needs of minority students and families. This summer, the group will release a long-delayed follow-up report: an “external audit” of parents and others in the community that will assess public perceptions of the district’s efforts.

Rev. Weldon Williams, an African-American pastor whose son attended Liberty, supported Rainey throughout the conflict with the district. When Plainfield hired a white principal in Rainey’s stead, Williams says, “It sent a message.”

More diversity among staff could help the situation, he suggests, but not just for black and Latino students. White students need more exposure to cultural differences in a globalizing world, he argues.

District educators empathize with Williams’ position, Hernandez says, and are taking steps to address the issues—from diversity training for principals to a district-wide effort to boost the hiring of minority teachers.

Plainfield’s School Board recently authorized the spending of additional funds to recruit teachers from colleges in Texas, Mississippi and other states with a higher percentage of black and Latino college graduates. The district also plans to hire bilingual teachers directly from Mexico through a new program sponsored by the Illinois State Board of Education.

Williams says the district is heading in the right direction, but integration issues run deep and will not be easily solved. One example: Williams says black and Latino students have been shifted from school to school more than white students as new schools are built, and that the district has drawn new attendance boundaries that cause more disruption and transfers among minority families.

Williams’ son was in a different school in 5th grade, 6th grade and 7th grade, prompting Williams to enroll him in a Catholic high school this year. Next year, he will re-enter the public schools as a sophomore at the new Plainfield East High School.

Plainfield educators concede that the new schools and boundary changes have caused problems, but for all families. Race is not a factor, they say. Instead, decisions are based on enrollment projections with the express purpose of minimizing school changes for all students. “It’s very likely if you live in this district you’re going to be moved at some point,” notes Hernandez.

To help schools cope with mobility, the district is working its way through a major overhaul of curricula. By streamlining and aligning lesson plans across the school system, educators hope to ensure students who change schools do so seamlessly.

Inside Heritage Grove Middle School this May, dozens of teachers from across the district were on hand to hammer out new math lessons that will span all grades. Common assessments are also being created as part of the project.

“If you don’t have a tight curriculum, K to 12, kids who transition [to new schools] can slip through the cracks,” says Carmen Acevedo, assistant superintendent for curriculum and instruction. She says alignment will keep a child who changes schools from relearning the same material, and help Plainfield better serve students who transfer in from other school districts.

The alignment project is the bedrock reform in a district that, like others undergoing demographic change, is adding other programs to address students’ needs, such as after-school tutoring and more rigorous coursework.

“I would say we’re becoming experts in intervention,” says Diveley.