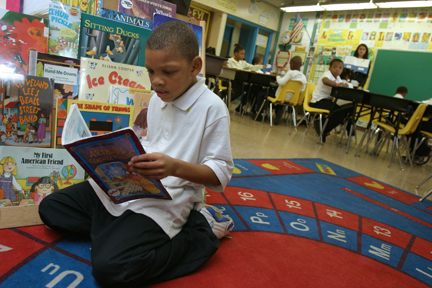 When Janet House became principal of McCorkle Elementary, she faced the challenge of jump-starting a school with rock-bottom test scores, uninspired teaching and high mobility.

House was appointed to replace a principal who was ousted under the district’s first intervention initiative.

“There was no real instructional program going on,” says Philip Hansen, who visited McCorkle as director of intervention. “Everyone worked in isolation. The upper grades were tumultuous in the halls, in the classroom. It just was a mess.” (Hansen now works for Princeton Review.)

Marvis Jackson-Ivy, a teacher at the time, says no one was surprised by the ouster of the old principal, given the school’s history of failure. “We knew that it was only a matter of time.”

By moving quickly to inspire confidence in her leadership and setting high standards for teachers and instruction, House led the school to raise its test scores by some 30 percentage points. Mobility, which soared to 43 percent in 1998, is now at 27 percent (The district average is 24 percent.) As the surrounding Robert Taylor Homes public housing project was being demolished, many families who had to relocate kept their children at McCorkle. House says about half of students now live outside the school’s attendance area, some as far away as 112th Street.

“I like how my kids are being taught—they’re not struggling with anything” says Serina Nolan, a mother of three who commutes daily on two buses with her children to take them to McCorkle. “They get all the help they need.”

House arrived with a resume that seemed tailor-made for transforming the school. She had worked for two years under Patricia Harvey, then the district’s well-regarded chief accountability officer. She had been a teacher and teacher-leader at nearby Beethoven Elementary under the mentorship of Lula Ford, who laid the groundwork for dramatic academic gains at that school.

Given her experience and knowledge of the neighborhood, House felt confident walking into McCorkle. Harvey told her she could return to central office as soon as she’d taken care of the school. (Harvey later became the superintendent of St. Paul, Minn., Public Schools.)

“I thought I could do this in a couple of years,” House says with a smile.

From the first staff meeting, House exhibited a warmth that calmed some of the staff’s anxieties about the transition, says preschool teacher’s assistant Rillie Lumpkin. And House found that her long tenure on State Street helped her to build rapport with parents, including some parents who were confrontational with the staff. “Many parents knew me from my days at Beethoven. If they didn’t, relatives did.”

House began looking for what she recalls Pat Harvey calling “low-hanging fruit”: a quick fix to inspire confidence and give teachers and parents some immediate, tangible proof that your leadership will make a difference.

So House got busy decorating to quickly improve the school’s environment. Drab hallways were hung with student artwork, neatly framed. Potted plants and small baskets of ivy suddenly turned up in the corridors. She found rugs for classroom reading corners and, with help from her building engineer, created a “poetry garden” in the center courtyard with newly planted shrubs, lawn furniture and small pools.

The next step was to improve discipline and order. McCorkle did not adopt a specific discipline strategy, but House began insisting on higher standards of behavior for students.

Laying down the law

Yet the root of the discipline problems, she observed, was poor instruction. “Kids get in trouble when the classroom is not organized, the teacher is not organized and [students] don’t have anything productive to do.”

Like other principals in impoverished communities, House found it difficult to attract good teachers, so she got to work to beef up the skills of the existing staff. Few had master’s degrees, so she encouraged those who didn’t to return to school. She asked teachers to arrive an hour early, three to four days a week, for intensive professional development.

Jackson-Ivy, now the assistant principal, says House laid down the law about the need to go above and beyond the minimum job requirements. “If you are not ready to go back to school and get a master’s degree or a [subject-specific] endorsement, you need to find another school,” House told some of the old guard. “If you’re not willing to come at 7:30 a.m. for meetings and stay late, you need to find another school.”

As for hiring, “the pool of teachers has not been the greatest,” Jackson-Ivy acknowledges. Some candidates come from foreign countries and have poor English-speaking ability. In Jackson-Ivy’s experience, many career-changers have not had adequate classroom training. While some prove to have natural talent, more often they flounder, she says.

Now, House and Jackson-Ivy often conduct intensive interviews with 30 to 40 candidates before hiring. “We’ll ask them, how do you teach reading comprehension?” Jackson-Ivy says. “We can discern by their answers if they don’t know what they’re talking about.”

Chante Asim, a 4th-grade teacher who previously taught in Los Angeles, says other principals she interviewed with asked general questions such as “Why should I hire you?” But at McCorkle “they asked about strategies, really focused on instruction.”

Others have been drawn by the school’s climate. After attending a meeting at McCorkle, 1st-grade teacher Renee Thomas was so impressed with the school that she made a beeline for the office to request an interview. Eighth-grade teacher Margo Phillips-Thomas says when she arrived for an interview last year, she found “big beautiful colors, plants in the hallway and flowers in front of the school.”

Today, most of McCorkle’s teachers joined the faculty within the last three years. In comparison to the district, a higher percentage of teachers are considered “highly qualified” under No Child Left Behind guidelines.

Yet turnover among the most talented teachers remains an issue. The school recently lost its three National Board-certified teachers: One enrolled in a principal preparation program, another became a lead literacy teacher at a newly opened Renaissance school and the third took another teaching position.

Kim Brasfield, a 2005 Golden Apple Teaching Award winner, also recently switched schools. She cites family reasons as well as the intense pressure to keep raising test scores. Despite that pressure, Brasfield admires House. “She’s definitely a strong leader,” Brasfield says. “You need to be in an environment like that.”

To improve curriculum, House quickly targeted reading instruction. Based on her own teaching experience and McCorkle’s test data, it was clear to House that students needed a stronger foundation in phonics. So she adopted the Open Court reading series, which provides a phonics base in the primary grades, along with literature and an emphasis on writing.

Reading specialists from Chicago State University were recruited as the school’s external partners (required at schools on probation), and House set up university-run classes at the school so teachers could earn reading endorsements. House even modeled reading strategies herself for staff.

Overall, the goal was to help teachers learn how to design complex and creative assignments for students, not just pencil-and-paper tasks.

Now, even phonics is taught with flair. In Nicole Guillen’s 2nd-grade class, youngsters chant and act out letter sounds, bending over to mimic someone with a backache to act out the sound “o-w” and pretending to jump rope as they read various letter combinations that have a “j” sound.

Other strategies Guillen uses include “reader’s theater,” in which children read storybooks aloud like a script, taking on the roles of characters and narrators. In literature circles, they divide into small groups to discuss books, with each student taking on an assigned task such as recording unfamiliar words.

“Ms. House really stresses that you have to teach beyond the textbook,” Guillen says. “If we just stuck with one program, our scores would never go any higher.”

Today, McCorkle awaits the latest test score results to see if the school will make it off probation. Yet House says she barely thinks about the label anymore—her sights are set higher.

“The goal is to show that children on State Street can learn just as well as children anywhere else,” she says. “It’s nine years and I’m still chasing after that goal.”