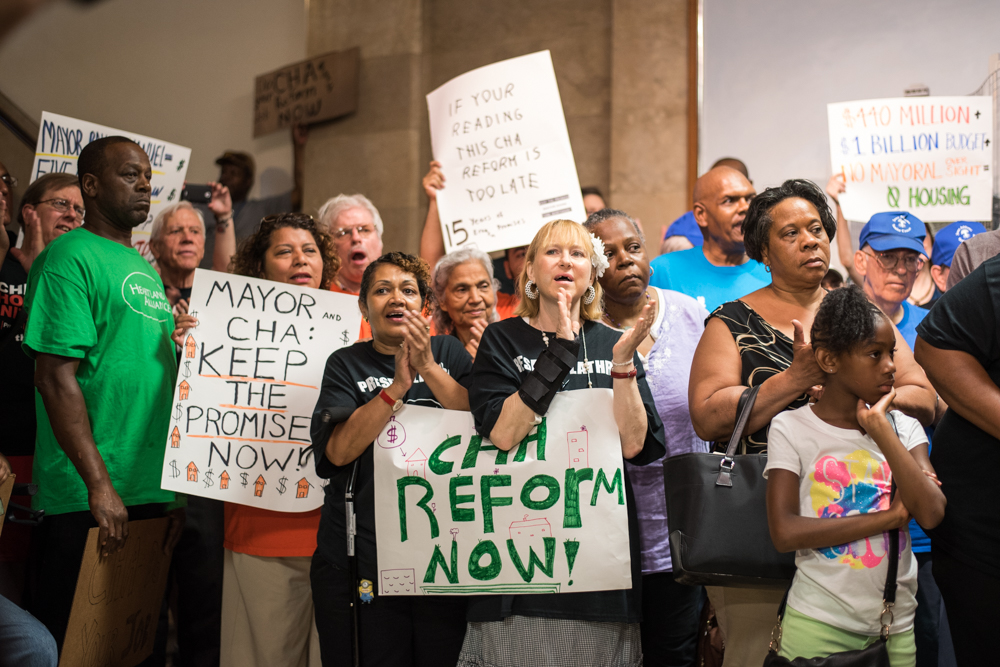 Supporters of CHA reform and the Keeping the Promise ordinance gather at City Hall on July 29, 2015.

While the city and its school district face financial crisis, one local agency is sitting pretty.

“Today the Chicago Housing Authority has $440 million in surplus funds,” said resident leader Cheryl Johnson at a press conference Wednesday. “It has a fully-funded pension system.  It has a double-A bond rating.”

But that’s not something to brag about, according to Johnson.  CHA got there by hoarding hundreds of millions of dollars that should have gone to house low-income Chicagoans.

Johnson and the Chicago Housing Initiative, a coalition of nine community organizations that work with low-income tenants and homeless families, were at City Hall to renew their call for passage of the Keeping the Promise ordinance, which would strengthen City Council oversight over the CHA.

The “promise” referred to in the ordinance’s title is the pledge by CHA to replace public housing units when high-rise developments were demolished between 1996 and 2010.  Outside the Henry Horner Homes complex, where a court order stipulated one-for-one unit replacement, CHA has provided less than 36 percent of the number of units promised in the 15-year-old Plan for Development, according to statistics from CHI.

Meanwhile over $100 million a year in federal funds allocated to CHA’s housing voucher program has been unspent, with about 13,500 vouchers unused each year.  Money from CHA’s housing programs was redirected to pay off its bond debt early and make excess payments to its pension plans.

“CHA has broken many promises to me and my community,” CHA resident Demetrice Davis said.  “When I was displaced [from ABLA Homes], I was told that I could return.  I waited 10 years, called CHA many times, and finally I was placed in Dearborn Homes.”

Davis added: “I have family members and friends who are in desperate need of housing, but they will remain on CHA’s waiting list for years before finally getting homes.  CHA could reduce the homeless rate in Chicago by 5 to 10 percent by just keeping the promise that it has not kept.”

She criticized CHA for selling and swapping land for commercial development on the South State Street corridor, where thousands of public housing units were demolished and hundreds of promised replacement unit have yet to materialize.

The proposed ordinance would require CHA to have clear replacement housing commitments before selling or swapping vacant land it owns.  It would also ensure full use of CHA’s voucher allotment and increase voucher holders’ access to upscale neighborhoods, and it would require one-for-one replacement of housing in redevelopment projects that use city funds.

Federal one-for-one replacement requirements were lifted for the Plan for Transformation under a program that also gave CHA much greater flexibility in how it uses federal funding for construction and operations.

“If HUD [the U.S. Department of Housing and Urban Development] does not want to hold CHA accountable for what they do in our community, then the aldermen standing with us today will,” Davis said.

Last year the ordinance was introduced with 13 sponsors.  This year, according to CHI, 23 aldermen have signed on as co-sponsors.  Joe Moreno of the 1st Ward is the lead sponsor.

Mayor Emanuel has yet to support the measure.  (It should be noted that under pressure from CHI, the CHA has increased leasing of vacant units and released more than 3,000 additional housing vouchers.)

But the cash horde at the agency remains an embarrassment.  And while Emanuel’s second term has been dominated by the city’s seemingly intractable financial problems, the Keeping the Promise ordinance offers a clear path to progress on an issue that has festered for many years.

CHA has sat on its money “while literally tens of thousands of black and brown families have gone homeless and struggled to keep a roof over their heads,” Johnson said.  Referring to the agency’s remaining vouchers and stockpiled construction funds, she noted, “Rarely in life or in politics do we have the opportunity to say, let’s help 12,000 families in the city of Chicago.”