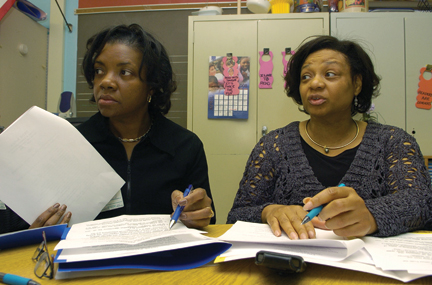 Anew coalition of community groups is working to involve parents in what has been a controversial initiative: school turnaround efforts on the West Side. There, three small high schools at the Orr campus will close in June and reopen this fall as one high school, and two feeder elementary schools will get an academic overhaul, too.

Starting with Orr and its feeder schools, the coalition, called PRISE Reform (for Parents and Residents Invested in School and Education), is looking to tackle such “big picture” issues as achievement gaps and the lack of community involvement in schools, says founder Patricia Watkins, who also is director of TARGET Area Development. The ultimate goal, says Watkins, is to develop a comprehensive vision for community-based school reform and recast the district’s relationship with parents and community stakeholders as a partnership.

Yet activists who have protested the School Board’s actions at Orr and the lack of community involvement in them wonder who is calling the shots at the new coalition. The reason is that both PRISE Reform and the Academy for Urban School Leadership, the nonprofit chosen by the School Board to run the Orr turnaround, are funded by the same foundation—the Bill & Melinda Gates Foundation.

Cecile Carroll, an education organizer with Blocks Together in West Humboldt Park, says she respects PRISE Reform and the people connected to it, but she is troubled by the funding connection.

“Our agenda is steered by our membership,” Carroll says. “A lot of the community members—including the local school council at [Orr small school] Mose Vines—are disappointed that there was no communication about the turnaround.”

PRISE Reform organizers, she says, “don’t have the same skepticism we do.”

Watkins agrees that the district made its turnaround decisions without enough input from parents or the community. Still, PRISE Reform decided to work with rather than against the effort. “Orr was already slated for closing,” she says. “There was nothing that we could do.”

Watkins initially planned to launch PRISE Reform on the South Side, but the Gates Foundation steered her west last October in an effort to contribute to the turnarounds’ success.

(The contract still includes a smaller South Side component; PRISE Reform will survey residents in Englewood and Auburn-Gresham about their public education concerns beginning in June.)

Watkins came up with the idea for the parent coalition after the foundation asked her what it could do to expand support for her projects. So far, Gates has committed $225,000 to PRISE Reform for the first year, and the door is open for more funding in the future.

A West Side resident, Watkins says she has always wanted to work in a neighborhood where she lives. The move also complements TARGET Area Development’s expansion to the West Side with a program that offers training to parents of children in grades K-3.

The goal of groups such as PRISE Reform, says Kelly James, a program officer with the Gates Foundation, is to give parents information so that school reforms have a better chance of succeeding.

“As the district rolls out different reform efforts, sometimes it’s hard to interpret or understand what’s going on,” James says. “The more information that’s available to everybody only helps the success of these efforts.”

Watkins says she understands why parents get upset about the district’s approach to communities, but she says a new strategy is needed to change what often has been an adversarial relationship.

Program officer Jeffrey T. Pinzino of the Woods Fund says PRISE Reform is part of “a new generation of school reform advocacy coalitions”—like A+ Illinois, the Federation for Community Schools and Grow Your Own Illinois—that connect smaller community organizations and garner substantial resources.

“Foundations are acknowledging the success of community organizing as a strategy of school reform,” he says. “Taking this to scale means funding these groups collectively so they can be effective advocates.”

He hopes the district will take note of the increased attention and resources going to parent organizing. The Gates Foundation sees parent engagement as “an important ingredient in the transformation process,” Pinzino notes.

PRISE Reform got off to a robust start in November, when it hired 26 temporary staffers to go door-to-door last November and survey 600 people about public schools. Results will go into a report on the community’s needs for school reform, which PRISE Reform expects to release in August. Also, residents’ comments will become part of the group’s platform.

Survey takers were also looking for parents who were interested in becoming school reform organizers and advocates. So far, 50 parents have attended at least two of the four training sessions PRISE is offering, including how to understand test score data, how to be a spokesperson and how to run parent focus groups.

“I learned some critical things about the schools,” says Sandra Ramsey, a parent who attended a training session. “[T]he way that we’re taught is different from the suburban schools and the white schools. I learned about low attendance. I learned about how children are being passed on from grade to grade not knowing anything.”

PRISE Reform currently has five staff members at four organizations who spend part of their time working on coalition work. A full-time PRISE Reform staffer will begin working in June, when TARGET Area Development opens its office in East Garfield.

Thanks to doors the Gates Foundation opened for her, Watkins already has met with more than half a dozen CPS administrators. She is looking to begin working with the district on a number of issues, including funding inequities, teacher professional development and giving parents better access to data.

In addition, coalition members visited two other schools run by the Academy for Urban School Leadership—Dodge Elementary and Collins Academy High School. “We thought it was one of the best models we had seen as far as the pedagogy they used, [particularly having] the teacher residents in the program with master teachers,” Watkins says.

A framework for strong community engagement was missing from the models, but Watkins says that’s what the PRISE demonstration project will address.

At a recent luncheon, PRISE organizers and dozens of community residents—including a handful of current and former Orr parents and students—listened to a presentation about the turnaround strategy and met the new principals for Orr and its feeder schools Howe and Morton.

“We’re always looking for our schools to be more successful in working with parents,” says Brian Sims, managing director for Academy for Urban School Leadership. “One of the challenges of doing turnaround schools is coming in and getting to know the community.”

But turnout was mixed at two recent PRISE Reform events. The luncheon that introduced the new principals to the community drew about 133 people, but few of them have children in the turnaround schools. A strategy session drew only 38 people, though about 60 were expected. Organizers blamed a scheduling conflict.

Meanwhile, Carroll of Blocks Together criticizes Academy for Urban School Leadership for not meeting with the local school councils at Orr until after the turnaround was announced. “That’s why you had such a large turnout to [Orr’s] hearing and to the board meeting,” she says.

Since councils were excluded on the front end, Blocks Together wants the school turnaround operators to support an elected LSC at Orr, share its criteria for teacher re-hiring, and implement a restorative justice model for student discipline.