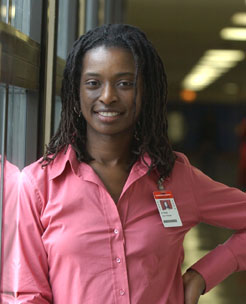 Earlier this year, former teacher and assistant principal Elizabeth Kirby became principal of Kenwood, taking over from Arthur Slater, who was initially sent to the school by central office. Kirby, who taught at Triumphant Charter and Olive-Harvey Middle College before coming to Kenwood, talked with Consulting Editor Lorraine Forte about the lessons she learned from charter schools, leadership and plans to make the school more academically competitive.

How did teaching prepare you to be principal?

The charter experience teaches you that you can do almost anything in a school if you’re creative enough. Probably most importantly, I saw strategies for reaching kids who are difficult to teach in a normal school setting, or who haven’t experienced success. So when I came [here] as a teacher, I had a skill set of different, out-of-the-box practices to really engage kids in learning and empower them. I taught kids at Olive Harvey who had gone to Kenwood and weren’t successful. It’s been interesting coming back here, experiencing the school as a teacher and administrator and seeing how structures that you put in place within a high school are important to nurture [students].

What are some of the ways you reach a kid who’s not been successful?

With constant contact—conversation with the kids and the parent and the teacher, feedback and accountability, and helping the kids feel like they can do it. Relationships are one piece, and school structure is another. So for those freshmen that fail courses, we have mandatory after-school tutoring and advising for 10 weeks—maybe even 20 weeks so that we can assure that they’re passing their classes.

There was a drive to have more kids from the area go to Kenwood. Has that turned out to be the case?

Probably about 60 percent of our population currently has addresses in Hyde Park. We’re focusing on raising achievement because that’s what’s going to make the school attractive to people both in the neighborhood and outside.

You mentioned budgeting earlier. The district is talking about student-based budgeting, giving schools a certain amount per kid. Would that be to your advantage?

Probably not. That’s what they did at charter schools and charters always felt strapped.

Assume you’d also get extra for special education and low-income kids. It’s still not going to be the same?

What’s your take on the high school reform plan?

It’s good in that it sets some clear outcomes and goals for schools and I think it brings transparency to the system. But what I hear a lot from veteran teachers—not only at Kenwood, but all over—is that this is just another thing that the system is doing. The way that [the district] supports it is really important and critical.

Tell me what you’re doing to improve the school academically.

We have AVID [Advancement Via Individual Determination]. As assistant principal, I pushed for that because I knew that would really give kids the academic background to be successful from high school all the way through college. That should expand the Advanced Placement enrollment because those kids take least one AP class. Second, my whole administrative team and I do two hours of classroom observation a day. That makes a world of difference in knowing the strengths and the weaknesses of teachers, and also seeing how the students are. There’s so much information that you get by doing that because it helps set priorities and shows ways that the school in general needs to improve.

Another thing that I’m trying to do is expand leadership. I do not have a philosophy that I’m the chief and everybody else is an Indian. We have so many talented educators in the building who are already leaders and if they’re not, we push them into leadership. For example, as we address [strategies for improving performance on] the Prairie State and the ACT, I have a team of junior teachers working on it. I have one junior teacher who has the framework and the philosophy to really help lead those teachers. Now, as a principal, I have a teacher who I can tell, “You’re the team leader on this.”