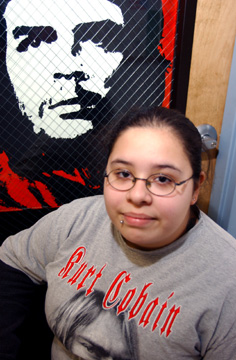 When severe health problems forced sophomore Leticia Alvarez to miss too many days at her former school, she dropped out and enrolled in Pedro Albizu Campos, an alternative high school designed to help Puerto Rican youth. Alvarez told Associate Editor Maureen Kelleher that her former school did not seem sympathetic to the health issues that led to her attendance problems. She says schools need to do a better job of connecting with students, to keep them from dropping out.

What happened when you dropped out?

They just gave my step-dad the transcripts and we left the school. That was it, no questions asked. … They figured, you know, I was 16 years old, I could drop out.

Some people think that there are neighborhoods where no one thinks it’s a big deal to drop out. How accurate is that perception?

Yeah, it’s extremely accurate, because some people [think] ‘Oh you dropped out, OK.’ You know, they don’t even talk about it, they don’t even ask why did you drop out? They just figure, it’s OK, my cousin dropped out yesterday or last week. … They see it every day.

What could high schools do to help students stay in school?

The district has just announced that students and parents will now have to sign a consent form that explains the consequences of dropping out. Would that have made a difference in your case?

No, I would have left that school anyway.

Will it make a difference to other students?

I think it would. … But sometimes it won’t make a difference because they figure, OK, [teachers] have given up on me, I can give up on myself and my parents could give up on me too. I think the change doesn’t only start with the student. It should start with the school, and the teachers in the school.

How is your school experience now different from what it was before?

At this school, I know they push you. They want to see you do good. They’ll sit and talk with you. They have no problem encouraging you and trying to help you.

So you feel that here people have been much more supportive?

It’s a small school and the teachers … are familiar with your background. And they’ll compromise with you if you can’t do a lot of work. They’ll sit and explain it to you. I’m a senior, and this year we have to do a senior project and my senior counselor actually took me out to lunch. … If you need some kind of special attention, they’ll give it to you without questions asked, as long as they see that you’re trying too.

If you had advice for students who are struggling in their high school right now, what would you tell them?

Is there anything that the school system can do to reach out to students who have already left school but want to return?

There’s a lot of things that they could do [but] they don’t necessarily have to be once you’ve dropped out. … They could talk to you and ask you, you know, what’s your reason for dropping out? Get to know you better, because in public schools, they don’t know you—you’re just another name, another number.