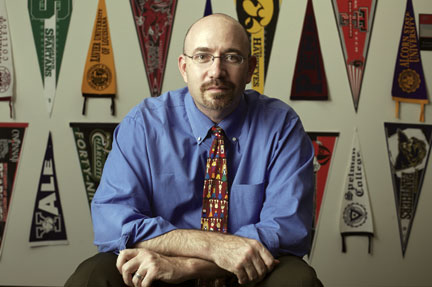 The mantra “no shortcuts” reflects the longer school day, Saturday school and daily homework that are staples of KIPP. Feinberg is adamant about the need for more teaching time to improve learning, especially for low-income kids who start school behind their middle-class peers. KIPP now operates a national network of 57 schools, including KIPP Ascend on the West Side. Feinberg, a Teach for America alumnus who was in Chicago recently, talked with Deputy Editor Lorraine Forte about motivation, expectations and lessons learned when another campus here, KIPP Chicago Youth Village, closed in 2006.

Have educators lost sight of the importance of more classroom time?

Yes. We’re so used to trying to make things quicker and easier. That makes sense for certain things, like cooking popcorn. But teaching kids how to read is something that there are no shortcuts for. Beyond that, from 3:00 in the afternoon till 6:00 is when most kids get in trouble. We need to make sure 3:00 to 6:00 is productive time, when kids can continue to learn and grow and develop.

If I’m a principal and teachers don’t have high expectations, I’m already thinking about how do I get rid of them?

OK. What else, though?

Teachers might have high expectations and believe kids can learn, but they aren’t acting on it because they’re discouraged or frustrated. So change ‘can’ to ‘will.’ Give them hope. Set them up for success. Get them a mentor. Get them to see and feel success, because success fuels more success.

Kids don’t have to test to get into KIPP. But they do come from families with parents who were motivated to apply. How much does that play into their achievement?

It plays into it a lot. But people turn that into “KIPP works because you have all the great parents.”

What do you say to that?

My empirical response is, look at our wait list—2,500 kids last year. We have room for 500. So we’re able to serve one-fifth of all the kids who want to come to KIPP. Let’s assume there is no KIPP effect. It’s all simply about having motivated, great parents. If that’s all that matters, then the four-fifths of kids who are not coming to KIPP should be just as successful wherever they go. Because it’s all about the parents, right? So where’s all the success?

My more emotional answer is for people who think that KIPP, or charters in general, have the more motivated parents and the ones who are not choosing to come are more dysfunctional. There’s something inherently racist in that assessment. That’s basically saying that the parent who cares about their kid and loves their kid and is functional, is the parent who stands out—that your typical parent [in a poor, minority community] is dysfunctional and doesn’t love their kid and isn’t doing good things for them. That’s a bunch of baloney. But one thing is true—a lot of parents in underserved communities are working two or three jobs to make ends meet. They care about their kids, but they might not have as much time to devote to staying with their kids at night because they’re out working. There’s no difference between West Side and Winnetka in what parents want for their kids.

What did you learn from KIPP Youth Village?

People make the difference. I do think we had the wrong school leader in place. We were supposed to be a contract school, but there was no contract, so it was being run as a regular CPS school. To defend her, I don’t think we trained and equipped her with the skills to navigate through a typical large, urban district bureaucracy. We trained her to be a maverick, entrepreneurial school founder.

Did union rules affect the school?

Well, it was just a perfect storm. We didn’t have a school leader who could navigate the bureaucracy. Then, we were paying our teachers a 20 percent premium, above the salary scale. The union said that according to the hours our teachers were working, that was unfair—we should be paying a 90 percent premium.

And you couldn’t afford that.

I’m speechless even now, to this day. There’s no money to do that.

If there were more opportunity for people to open their own schools, would more high-achieving people go into education?

That’s a big piece of it. Talented, energetic, bright people don’t want to be confined to an A-to-Z world. Also, most of my friends [from] the University of Pennsylvania went to the Wharton School of Business. When they came out, they were working 100 hours a week on Wall Street. I don’t think they’re doing that because they absolutely loved crunching numbers. They did that because of salary, because of the status society places on investment bankers. I think they would be willing to sacrifice some of those dollars for a job in which they’re contributing to the world. There’s social payment that you get for that. Teachers may never make as much as doctors, lawyers, investment bankers. But if they can make in the ballpark, and if the profession is respected, you’d get a lot more of the best and the brightest going into education.

You talked about the difficulty of running a high school. Is there anything that you’re doing differently from the regular public high schools?

A lot of people are talking about the new three Rs: rigor, relevance, relationships. Creating relationships and having the kids know that the teachers care about them is important. And of course, just like any relationship in this world, you have to work on it over time. Doing that, [and maintaining] rigor and pushing them [academically] makes it a little bit challenging.

Classroom management is a significant issue with teachers and principals. Which of KIPP’s five pillars relate to it?

High expectations, not just about academics, but about behavior. Most of our schools have two rules: work hard, be nice. We keep it simple.

Is there a particular approach to discipline?

It’s important to know why people do what they do. In [Psychologist Lawrence] Kohlberg’s system, at levels one and two, people do what they do because they’re afraid of getting in trouble and they want a reward. At levels five and six, you evolve up to empathy and a code [for your behavior]. Our kids mostly come in at levels one and two. We bring them up to levels five and six. But you have to speak their language. So because our kids are coming in and they’re motivated by being afraid of punishments and being inspired by rewards, you have a system in place that focuses on the positive—like rewards—and has consequences for the negative.

What else do kids learn?

Kids need to learn that they have the power to make choices. When they make good choices, good things will happen. When they make bad choices, bad things will happen. So good things happening need to be things that they look forward to, and bad things happening need to be things that they don’t like. That’s where you have to start. You do that with kindergarteners through 5th-graders. But if we have 12th-graders who are still only getting their homework done because they want a reward or because they don’t want detention, they’re not going to go to college and do well. That’s why we need to build character in our kids over the long run.

What recommendations would you give for public education in general?

Part of it is money.

Right. But there’s a variable you have to look at first. Are we really, truly, maximizing the use of the dollars we have today? Do we need all those people working in central office? Do we need all of the administrators in schools? Once we’ve gotten rid of the variable of efficient operation, then we’re ready to address funding.