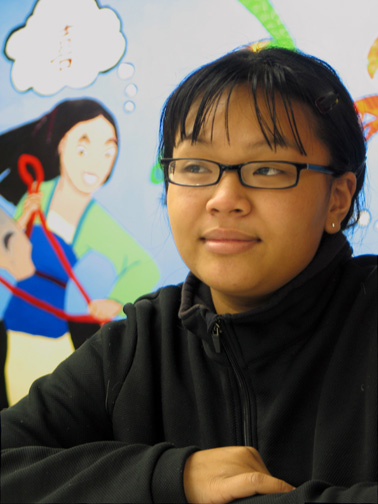 When a group of Chicago Public Schools teens decided that lack of college guidance was the biggest problem they faced in school, the discussion eventually led to the making of a documentary on the inequities between college prep and neighborhood schools. The film, with the working title “CPS Preparing Students for College,” was financed with a private grant; the non-profit Street-Level Youth Media provided technical help. Soktheary Nak, a graduate of Roosevelt High who hopes to enroll in college next year, directed and produced the film and also appears in it. She talked with writer Emily Horbar about the documentary and what she hopes it will accomplish.

How did making the documentary change your perspective on your school experience?

There wasn’t really much of a change, because I really came in here with the view [that] my school sucks. I was a senior, and throughout my four years of high school, I never spoke to my counselor or had her approach me about anything that had to do with college. The ACT was a joke in my school. We didn’t even know we were taking this big test that decided our futures, and everyone in my division got under 15. When we got our scores, [we were told], “These are your scores that you’re going to put on your collage application.” We were like, “Oh?” I was nearing graduation [but] I hadn’t filled out any applications. No one had given us any information on anything. The graduates from my senior class, a majority of them are just going into community college. It was just like we were left to fend on our own.

My best friend went to Northside College Prep. She was hit every day with, “You need to do this because if you don’t, you’re not going to get into college.” If she didn’t see her counselor, her counselor came [and said], “I haven’t met with you this month.” It was just so different. Aren’t all the schools supposed to be preparing us equally for college? How come the college prep schools get more of everything?

What were some other glaring inequities?

Resources, because our buildings were falling apart and not all that clean, and our books were really old compared to my friends’ [books] at Walter Payton and Northside. Even though they were newer schools, so what? We should have been getting updated books too, you know? The books that we have [show] people who wear bellbottoms. That’s kind of ridiculous.

What could close the gap between the more elite schools and the neighborhoods?

All we’re asking is for there to be updated books, better resources. We’re not asking for laptops for every kid, just the basics to have a better education. A teacher said not all schools can be like New Trier (in a wealthy North Shore suburb). That’s not what we’re asking. We’re just asking for books that we can actually learn from, a new and better environment. It’s not like we’re asking to remodel all the schools.

Is money a big issue?

Money is a big issue. Schools should be receiving equal funding. How come Northside and New Trier can afford to check out laptops to their students and we don’t even have enough books for every student in the class? We don’t even have books to take home and do our homework because we have to share with two or three classes at a time.

What do you hope people will learn from seeing the film?

I hope that this will get the attention of someone who has power to do something about it. I don’t want my brothers and sisters to have to go through what I went through. I don’t want them to not have guidance for their future and have to end up working in factories like my mother because she didn’t have enough education. If I would have had counselors [tell me], “This is the time you should be sending applications,” I would be in college right now, [not] working dead-end jobs because all I’ve got is a diploma.