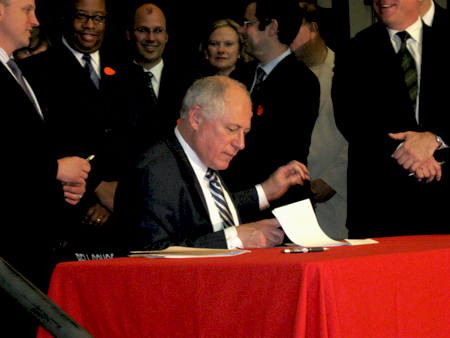 In a ceremony today at Bell Elementary School in North Center, Governor
Pat Quinn signed a bill that will make it tougher to become a principal
in Illinois.

In a ceremony today at Bell Elementary School in North Center, Governor
Pat Quinn signed a bill that will make it tougher to become a principal
in Illinois.

Quinn said the bill would boost Illinois’ Race to the Top application, submitted today; in all, 35 states applied for the second round in which $3.4 billion will be doled out to winners. Illinois’ new bill lays the groundwork for tougher state assessments of principal candidates, more intensive internships, and more competitive admissions to principal preparation programs.

Beefing up the requirements for prospective principals is part of the criteria used to determine winners under Race to the Top.

“Our principals are like the goalie in hockey,” Quinn said at the ceremony, in an auditorium packed by several hundred Bell students. “You’ve got to have somebody there to defend, to make sure things go the right way.”

It was a lighthearted beginning for a law that faces opposition as the rulemaking process – which determines how it will be implemented – begins.

Originally, Illinois State Board of Education officials had hoped the law would begin to take effect in fall 2011. That time frame has now been delayed by a year because of an outcry from universities that were worried they would not have enough time to implement the required curriculum and structure changes, says Thomas Jandris, dean of the College of Graduate and Innovative Programs at Concordia University.

During the rulemaking process, Jandris says, his school and others will fight the rest of the proposed changes to principal preparation. Those changes were outlined in the spring 2010 issue of Catalyst In Depth.

Jandris says Concordia University stands to lose $1 million a year because of the costs associated with the proposed full-time, month-long residency for prospective principals.

Another big hit would come from proposed requirements limiting the proportion of classes that can be taught by adjunct faculty.

It isn’t clear when the state board will approve potential rules for the law’s implementation, and release them for a 45-day public comment period. It could happen as soon as the next Illinois State Board of Education meeting, which will occur June 23-24.

Before the law was passed, it went through several changes. Earlier Catalyst Chicago coverage noted that the initial version of the bill was silent on alternative preparation programs, which are administered by nonprofit organizations in partnership with universities.

The new bill doesn’t just allow for alternative programs, like New Leaders for New Schools; it sets them free from the requirement to have university participation.

Jandris painted the entire bill as an effort to pander to Race to the Top application reviewers. “The expedient is the enemy of the good; that’s what’s happening here,” Jandris said. “They have thrown a bone to the politically potent and financially rich Teach for America and New Leaders for New Schools programs that are so connected to the federal government… (and) have been heartily endorsed by Arne Duncan’s administration.”

Erika Hunt, who coordinates the Illinois State Action for Education Leadership project at Illinois State University, is also expecting a fight. She backs the proposed changes, noting that they are based on recommendations from state “redesign teams” that have spent years weighing the consequences of changes to principal preparation.

“We hope that we can honor what these groups have been doing for many years,” she says. “It will be important, if we want to keep what the redesign teams came up with, that people remind ISBE” during the public comment period.

The final bill kept those routes, and added a fourth: Anyone who serves in an administrative position, with the current administrative endorsement, for a full year between July 2009 and July 2014 can get a principal endorsement automatically by writing to the state.

It also allows stellar teachers a faster track to a principal endorsement. Most people will have to teach for four years (up from the current two years) before starting a principal preparation program.