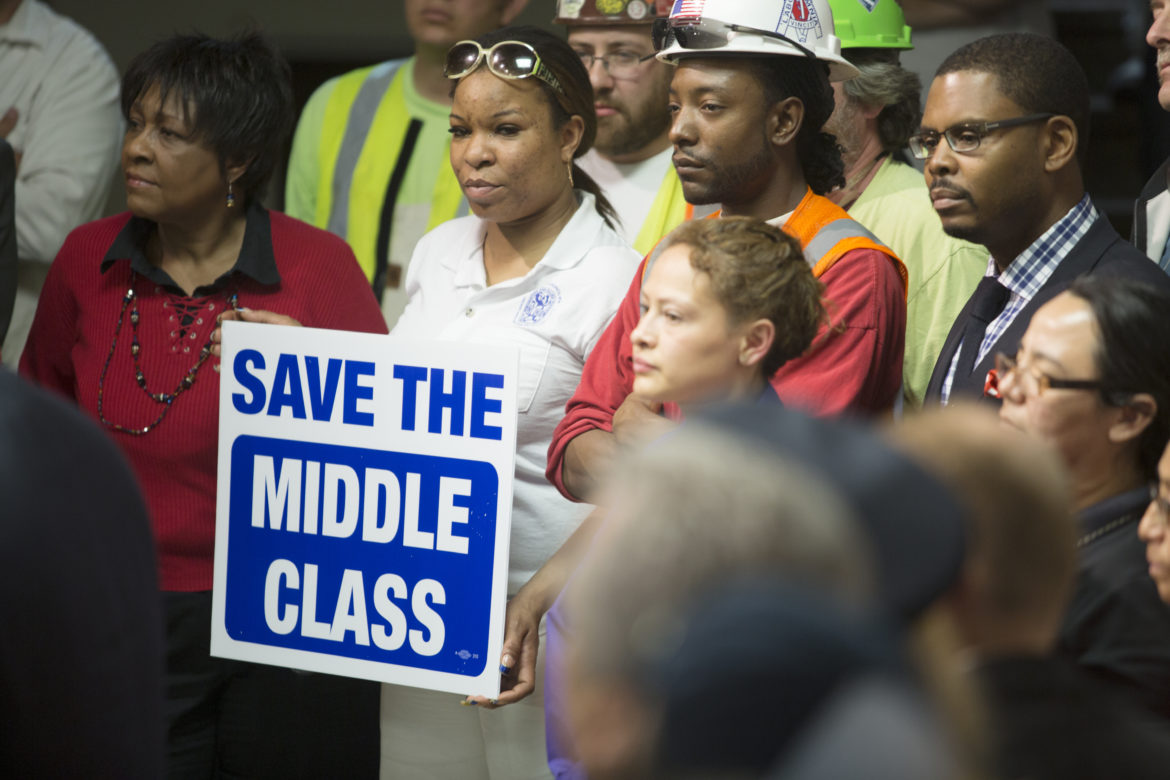 A crowd opposing "right to work," anti-union proposals such as those planned by Illinois Gov. Bruce Rauner gathers Wednesday at City Hall, where Rauner spoke to the City Council.

With Gov. Bruce Rauner stepping out as the latest proponent of so-called “right to work” legislation, it’s worth recalling who was the first.  That would be a southern oil industry lobbyist — and racist — named Vance Muse.

Born in Texas in 1890, Muse had campaigns against women’s suffrage, child-labor laws and the eight-hour workday under his belt when he formed the Christian American Association in Houston in the early 1940s.  CAA was “the first [organization] in the nation to champion right to work as a full-blown political slogan,” according to sociologist Marc Dixon.

A major part of Muse’s right-to-work rhetoric was the threat posed to Southern segregation by union organizing.  His warning: “From now on, white women and white men will be forced into organizations with black African apes whom they will have to call ‘brother’ or lose their jobs.”  That was according to Stetson Kennedy — a muckraker who at one point was The Nation’s southern correspondent — in his 1946 book, “Southern Exposure.”

During the ’40s, the Congress of Industrial Organizations had considerable success organizing Texas industries with racially mixed workforces, including oil, steel and auto. And “CIO gains challenged the race-based political economy of the region,” according to Dixon.  While there was inconsistency among locals, the national CIO opposed segregation and had organized multiracial unions.  In Texas, the state CIO had campaigned against the poll tax, which was used to keep blacks from voting.

Union success alarmed more mainstream business groups — especially after the CIO launched a huge (and ultimately fruitless) southern organizing drive in 1946 — and they took up the cause but shifted the rhetoric.  Instead of opposing a Communist plot to integrate society, they started talking about the “individual rights” of workers — the same way Rauner does today.

Texas was one of 14 states that passed right-to-work laws prior to the Taft-Hartley Act of 1947, which enshrined the right of states to bar unions and employers from negotiating contracts that require “fair-share” fees from bargaining-unit members who choose not to join unions.  (And whom unions are required to represent.)

When Muse died in 1950, he was agitating for a right-to-work amendment to the U.S. Constitution.

That’s the context for Martin Luther King’s famous statement on the issue: “We must guard against being fooled by false slogans, such as ‘right to work.’ … It is a law to rob us of our civil rights and job rights. … Its purpose is to destroy labor unions and the freedom of collective bargaining by which unions have improved wages and working conditions of everyone. …

“Wherever these laws have been passed, wages are lower, job opportunities are fewer and there are no civil rights. We do not intend to let them do this to us.  We demand that this fraud be stopped.”

Rauner and other contemporary right-to-work advocates aren’t trying to perpetuate segregation; they’re trying to increase “competitiveness” — in particular by reducing wages and other employment costs.

But it turns out, according to a new study that looks specifically at Rauner’s proposal for local right-to-work zones, that the wage depression it would cause is likely to be particularly harmful to African-American and Latino workers.

One reason is that black workers are much more highly unionized than others in Illinois.  According to Bureau of Labor Statistics data from 2013, nearly 26 percent of the African-American workforce in Illinois is unionized.  For white workers, it’s 15.4 percent; for Latinos, 12.6 percent.

And the boost in earnings provided by unionization is greater for African-Americans — more than $4.60 an hour — and particularly for Latinos, who average $6 to $7 more an hour if they belong to unions.  So reducing unionization is going to hit these workers hardest.

As one example, Latino male workers are heavily represented in the construction industry, said Frank Manzo of the Illinois Economic Policy Institute, who’s a co-author of the study.  Not only do unionized construction workers get a higher wage, they also get steadier employment — and they also get apprenticeship and training programs, which increase their earnings.  Union employers also have better safety records. Manzo said right-to-work laws hit the construction industry harder than any other sector.

Another outcome is higher use of public-assistance programs like food stamps in right-to-work states, Manzo said.

Will lower wages at least give us economic growth?  It doesn’t look likely.  The study compared Illinois with its right-to-work neighbor, Indiana, where the average wage is $3 an hour lower.  Job growth and wage growth are significantly higher in Illinois, and the unemployment rate is virtually the same in both states as of December.

Rauner may be a true believer in trickle-down ideology, but for major right-to-work supporters like the corporate-sponsored American Legislative Exchange Council (which pioneered the county-level approach Rauner is now taking), it’s all about removing unions as a political check on the power of corporations.

But that will have real costs for working families in Illinois.  And the costs will be highest for blacks and Latinos.

Vance Muse wouldn’t have any problem with that.