It’s been a little over one year since Rasmea Odeh, the prominent Palestinian activist, was stripped of her U.S. citizenship and forced to leave Chicago, where she helped build a politically active Arab community during her 23 years in the United States.

It’s been a tumultuous year for U.S.-Palestine relations as well. The Trump administration has taken on particularly aggressive policies against the occupied territory. In early September, officials ordered the office of the Palestine Liberation Organization to be shut down in Washington, D.C., effectively ending Palestinian diplomatic representation in the United States. In late August, the U.S. Department of State upended a decades-long policy by canceling funding for UNRWA, the United Nations relief agency for Palestinian refugees. The administration is also continuing to call for  a drastic reduction in the number of Palestinians identified as refugees and internationally recognized as having a “right of return” to their homeland.

These measures followed President Donald Trump’s declaring the contested city of Jerusalem as the capital of Israel in May. Israeli military violence against Palestinian demonstrators at the Gaza border escalated as American and Israeli officials celebrated the relocation of the U.S. embassy to Jerusalem. At least 60 Palestinians were killed by Israeli forces and more than 2,700 Palestinian demonstrators were injured, a number of casualties not seen since the 2014 conflict between the two sides.

Odeh watched these events unfold from Jordan, where she was deported to last September after a four-year immigration battle. “From Amman, it’s just three kilometers away [from Palestine,]” she said at the time. “I can’t do anything to help my people.” The killings reminded Odeh of the violence that uprooted her family from Palestine decades earlier. “This was my life and until now it’s the same. I don’t think it’s changed from that time until here. With time, [it’s] going worse and worse and worse.”

Not allowed to return to her homeland in the Palestinian territories, Odeh is pressing on in Jordan, and at age 71, working to rebuild a life in a country where she has no family and hasn’t lived in for decades.

“The idea that she, like three and a half million others, can’t go back home … is extremely frustrating and sad,” said Temple University professor Marc Lamont Hill who was part of a movement for Black lives delegation that visited the occupied territories and wrote in Odeh’s support. “But it’s a reminder of what it means to be pushed out by two states. She represents the dislocation of the Palestinian refugee. She represents what it means to be on the wrong side of an apartheid legal system in Israel and in the United States.”

A life in exile

Odeh was just an infant the first time she was displaced. In 1948, her family left their village on the outskirts of Jerusalem, frightened by reports of Zionist attacks on Palestinians as the Israeli state was created. They thought they would return home in a few days when the threat passed, but they never did, and instead joined what would become one of the largest refugee populations in the world, according to the UN Refugee Agency.

The family had to flee again when war broke out in 1967. Their apartment building was badly damaged by bombing as Israel more than doubled the size of the land it occupied in just six days.

It was during those years that Israeli authorities began a campaign of mass arrests against Palestinians that would sweep up thousands, including Odeh. She was arrested in 1969 and accused of participating in a deadly terrorist attack. Odeh has long maintained that she was tortured and sexually abused over 25 days before agreeing to sign a false confession to the crime. Like virtually all Palestinians tried in Israeli military court, Odeh was convicted, and at age 21 sentenced to life in prison.

Odeh spent 10 years behind bars before Israeli and Palestinian authorities agreed to a prisoner exchange, releasing her and 75 other Palestinians. Later that year, Odeh testified about being tortured to a United Nations special committee, becoming one of the first Palestinian women to publicly testify about the use of sexual torture in Israeli custody. It was a milestone in drawing attention to an abusive tactic that Palestinian women continue to report is used against them in Israeli prisons.

“What underlines this practice is this idea that Arab culture is so backwards towards women and Arabs have these ideas about daughters and modesty and honor and shame. If you really want to target people, you would shame their families or shame their daughters,” said Nadine Naber, an associate professor in gender and women’s studies at the University of Illinois at Chicago who’s worked with Odeh. “So that had been going on but historically, people hadn’t really talked about in public, except Rasmea.” 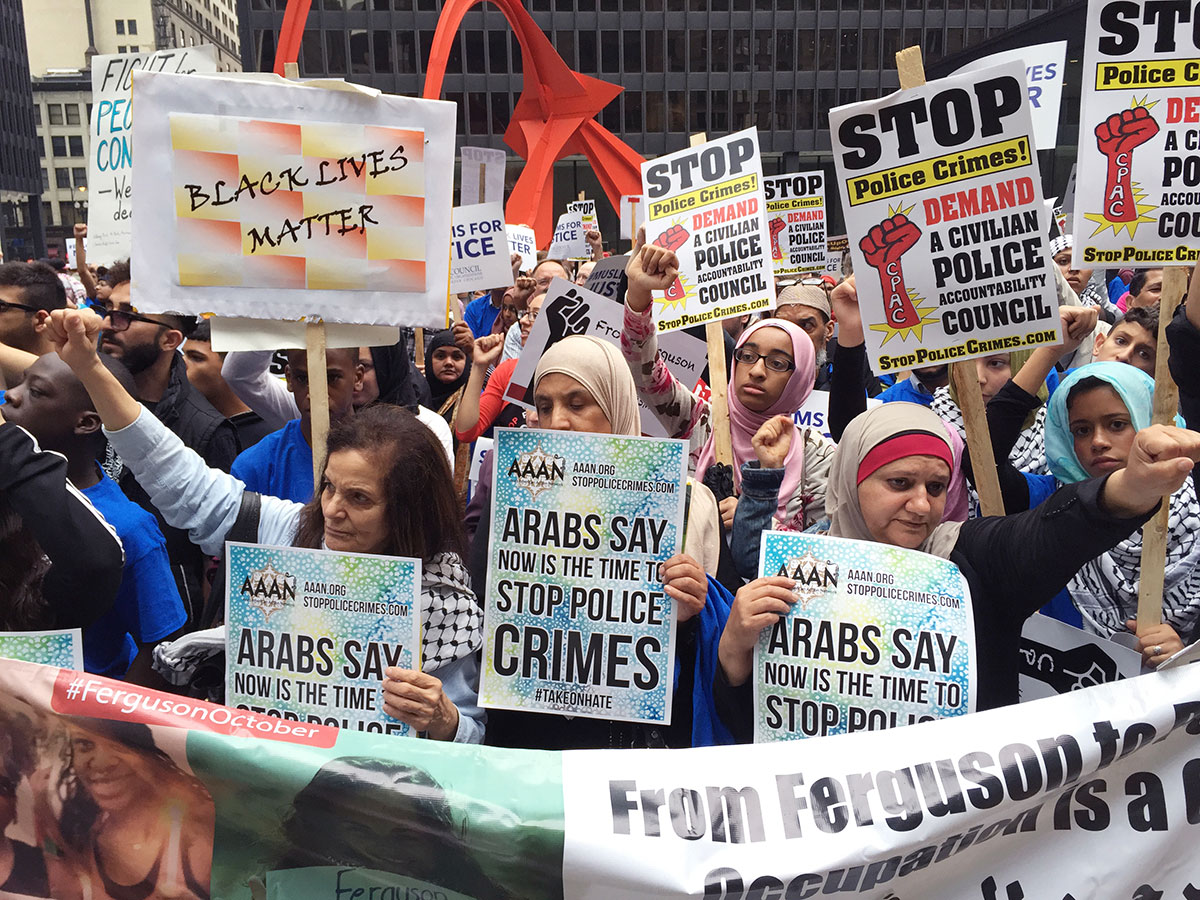 Rasmea Odeh and other members of the Arab Women’s Committee participate in a march demanding community control of the police in downtown Chicago on Aug. 29, 2015. 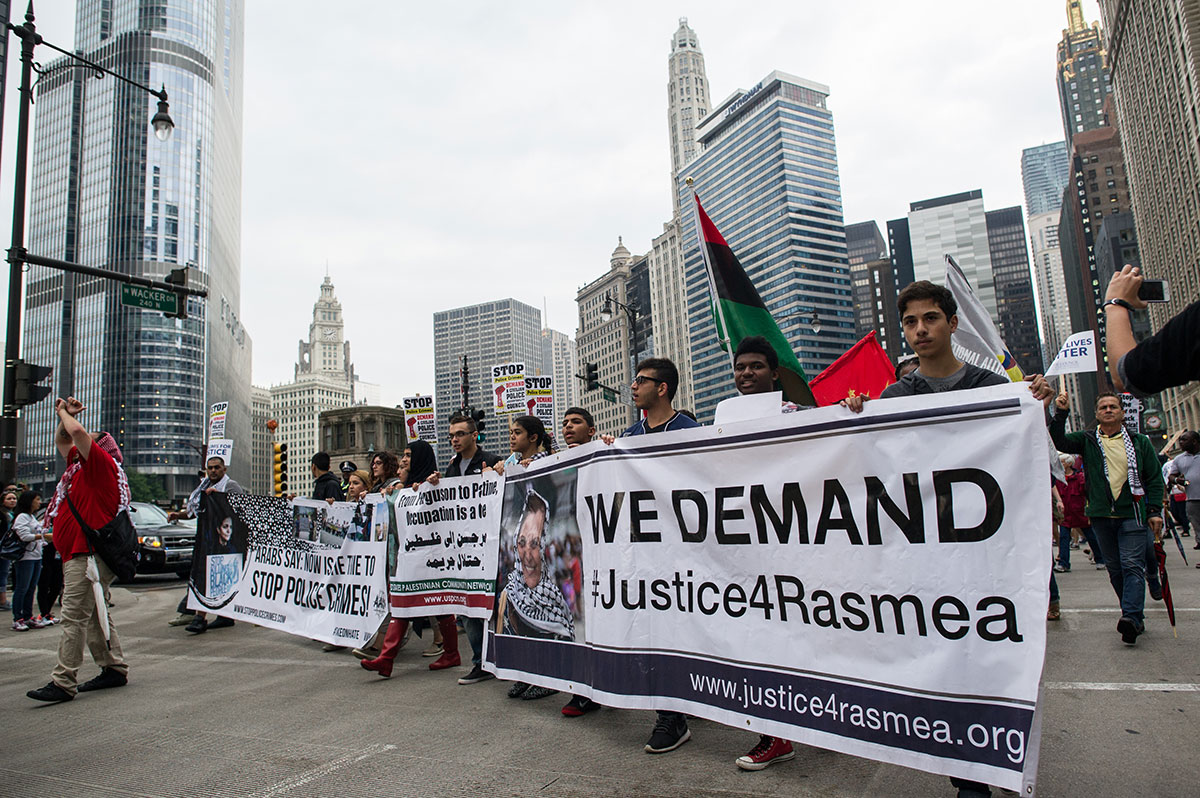 Demonstrators carry a banner in support of Rasmea Odeh at a march demanding community control of the police in downtown Chicago on Aug. 29, 2015. 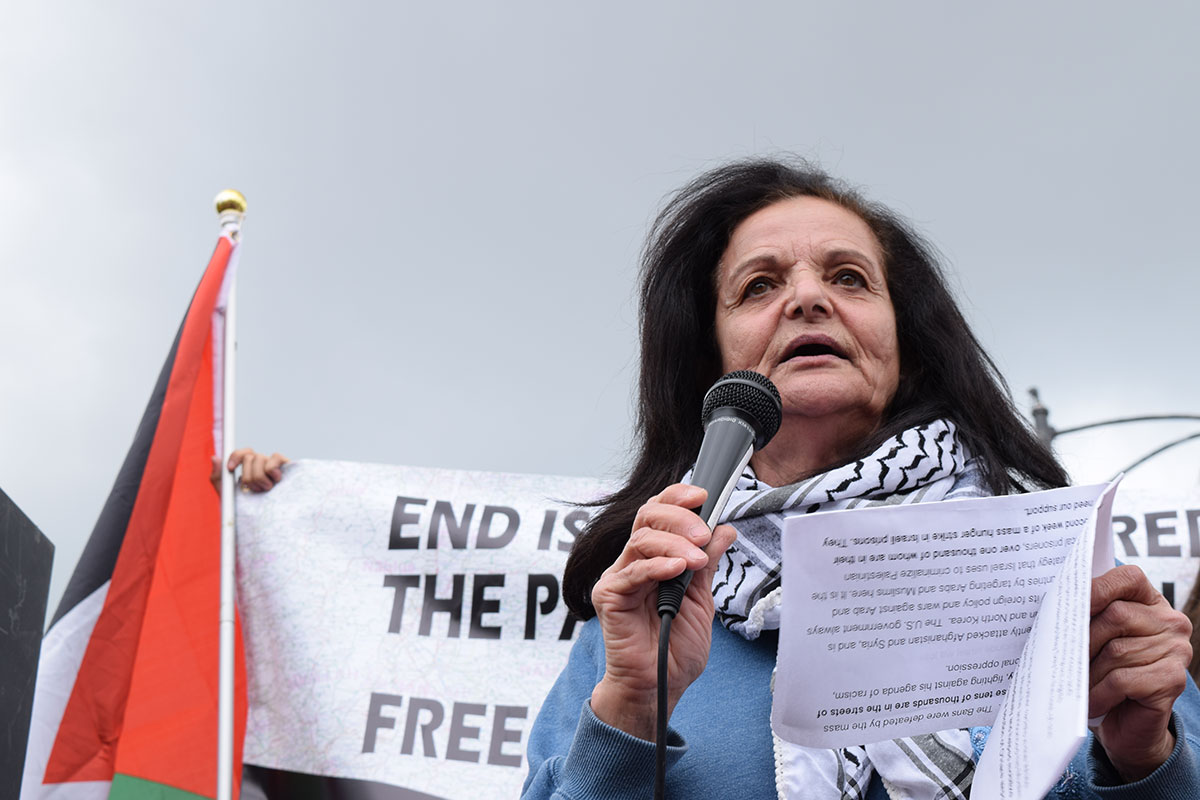 Rasmea Odeh speaks at a May Day rally at Union Park on Chicago’s West Side in 2017. 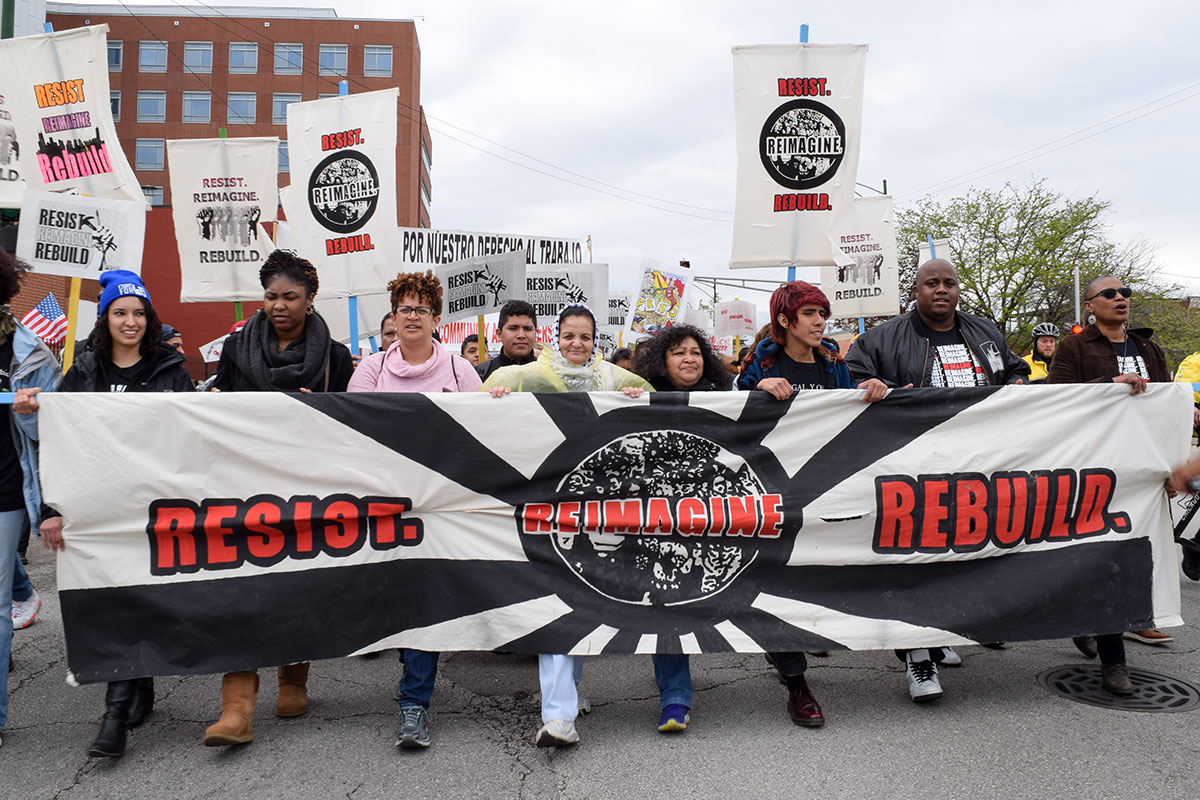 Rasmea Odeh participates in a May Day march in Chicago in 2017.

Forbidden from returning to Palestine, Odeh lived in Lebanon and Jordan doing community work before immigrating to the United States where some of her family lived.

In 2004, she settled in Chicago where she would find her political home. Odeh began working with the Arab American Action Network (AAAN), which operated a community center on the Southwest Side, and created the Arab Women’s Committee in 2006 to specifically serve the needs of immigrant and refugee women in the community. The work naturally led her to forge alliances with Latinx-led immigrant rights groups in Chicago. She was also drawn to the Chicago Alliance Against Racist and Political Repression, an organization that long worked to free black prisoners like Angela Davis and the wrongfully convicted.

“She’s always seen the world with an international lens … it’s why it was a natural thing for her to say, ‘The struggle of black people in this country is my struggle as a Palestinian fighting for liberation,’” said AAAN executive director Hatem Abudayyeh.

The bridges Odeh built between her organization and other activist groups would win her widespread support among progressives when she was arrested in 2013 on immigration charges. She was shocked to be accused of “unlawful procurement of naturalization” based on questions on the citizenship application she filled out nearly a decade earlier about her criminal record. Odeh says she thought they applied only to her time in the United States and did not disclose her arrest and imprisonment in Israel, a subject she had always spoken openly about. Her friends and colleagues immediately saw her arrest as politically motivated.

“We said from day one … this immigration charge is a pretext,” said Abudayyeh, who would become national coordinator of her defense committee. “Criminalizing Rasmea is their way of just criminalizing our movement in general.”

From the onset of her trial, Odeh was characterized as an unrepentant terrorist. While her conviction in Israel was allowed into evidence, testimony and evidence that she had been tortured into falsely confessing to the crime was not. She was convicted of unlawful procurement of naturalization but on appeal, won a new trial. But when federal prosecutors added new allegations of terrorism to the case in March 2017, Odeh and her defense committee felt a fair trial would be impossible, especially under the Trump administration. She accepted a plea deal to be deported but avoid prison time.

Odeh lived in a hotel in Amman for several months before finding an apartment. She says people there have been generous and supportive toward her but that she misses her loved ones in Chicago.

“I have networking relationships but not much close friends like there,” Odeh said in an interview earlier this month. “I have my family there, my friends, my colleagues, my work in Chicago. Here it’s different.”

Odeh says her main challenge is finding a job at her age. Losing her American citizenship also meant losing her Social Security benefits. She spends her days volunteering and writing but wants to work again.

“I want to work. I want to do good things to help the people, to help the community, especially to help the women,” she said. “Always I’m looking to find the way I can continue to be active. I didn’t feel that I lost any of my energy. The opposite. I have a lot of energy.”

Odeh’s friends and supporters in the United States say they are relieved that she avoided time in a U.S. prison and is not in the custody of immigration officials.

Staff at the Arab American Action Network said in September that it has been difficult to adjust as an organization without Odeh, who brought decades of community organizing experience and handled day-to-day operations.

Advocates have raised concerns that immigrant activists like Rasmea could be especially vulnerable as the Trump administration revs up efforts to denaturalize and deport more people. But Odeh points out that the case against her was pursued by the Obama administration and that she is one in a long line of prominent Palestinian leaders in the U.S. to have been imprisoned, sanctioned, or put into deportation proceedings as a result of high-profile federal prosecutions over charity or political work dating back to the 1980s. She doesn’t see the Trump administration’s policies as much of a departure from longstanding U.S. policy toward Israel and Palestine.

“The U.S. position is consistent regardless of the identity of the existing president,” Odeh said in September. “All of them are committed to Israel’s security, and they provide them unlimited support all the time with money, weapons and political [cover].”

But Odeh says that despite the consequences and setbacks, it remains imperative for her to work towards change.

This story is being co-published by Colorlines, a daily news site where race matters, and The Chicago Reporter.

Asraa is the managing editor of The Chicago Reporter. Email her at amustufa@chicagoreporter.com and follow her on Twitter @AsraaReports.