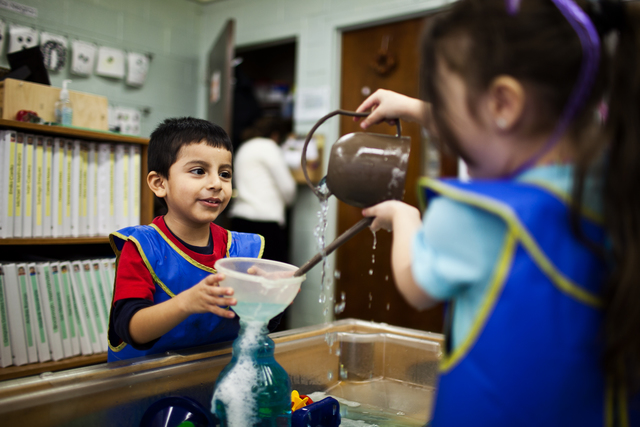 In a proposed budget that’s chock full of draconian cuts to state services, Gov. Bruce Rauner wants to increase general state aid for schools by some $300 million next year – an amount that would bring Illinois closer to the so-called “foundation level” of per-pupil spending for basic K-12 education that the state is supposed to provide.

In recent years, Illinois has only funded 89 percent of the $6,119 foundation level. Rauner’s proposal would fund 95 percent.

“For years, state support in education has been cut even when it didn’t have to be,” Rauner said during the Wednesday budget address. “It’s time to make education our top priority again. And that’s what this budget does.”

Overall, Rauner’s proposed 2016 budget of $31.5 billion depends on major changes to the state’s pension system – including fewer retirement benefits for new state workers — as well as cuts in Medicaid spending, higher education and allocations to cities, among other areas.

On the K-12 education front, the proposed budget seeks cuts to a range of categorical items, such as spending on Advanced Placement classes, after-school programs, arts and foreign languages, and funding to help teachers obtain National Board Certification.

Dan Montgomery, president of the Illinois Federation of Teachers, called the categorical cuts “tremendously harmful for schools and community […] And let’s be clear, that $6,119 is a manufactured number that is severely less than what is required to educate kids. He is still underfunding education.”

One area that would get a boost is early childhood education, which isn’t surprising considering that his wife is runs one of the state’s major advocacy and service groups in that field, The Ounce of Prevention.

“Every dollar invested today in early childhood education saves us more than $7 in the future,” Rauner said during his budget address. “Increasing funding for our youngest is the smart and the compassionate thing to do.”

The budget seeks an additional $25 million in state aid to early childhood education, which is half the amount the state has already promised the federal government it would allocate in order to win a federal preschool expansion grant. It’s unclear whether the state would face consequences if it doesn’t kick in the full $50 million it committed to in order to get the four-year federal grant.

Elliot Regenstein, senior vice president of advocacy and policy for The Ounce, said it was important to put the proposed increases to early childhood education into perspective.

“While the early childhood block grant is hugely important and we’re very pleased to see a proposed increase, that’s just one of the many funding streams serving children in families,” he said. “If we increase that while making significant cuts elsewhere, those families will not come out ahead.”

During his speech, Rauner made several references to a current $300 million shortfall in funding for a state childcare assistance program that subsidizes care for low-income families. The governor said that his office is working with lawmakers now and hopes to reach some sort of solution for the current fiscal year in the next few days. It’s unclear what that solution might look like.

Regenstein said state officials who spoke during a briefing in Springfield mentioned proposals to increase the co-pay families pay and eliminate subsidies for child care that takes place in the child’s home or by family members. “We’re very concerned about any changes that would adversely impact low-income children and families,” he said.

The governor’s budget book mentions some of Rauner’s education priorities, including lifting the “arbitrary cap on charter schools, [reducing] funding disparities for public charter schools and [providing] more high-quality educational options to students through tax credit scholarships.” Rauner also wants to reform teacher tenure – something that is not described in detail – and provide incentives for local school districts to reward high-performing teachers and administrators.

Also on the list of priorities is eliminating “unnecessary testing” and instituting a “rigorous K-12 student growth measure, using ACT and other national metrics.”

But while Rauner is calling for more spending on K-12 education, he’s also seeking cuts of around $400 million in spending on higher education. “Subsidies to universities are reduced, as they have numerous other funding sources,” the budget book notes.

Among the items on the higher education chopping block: $1.5 million in state funding to the Grow Your Own program, a minority teacher recruitment program that was the subject of a critical Chicago Tribune report earlier this year.

“This initiative started in 2005 with the goal of adding 1,000 new teachers to hard-to-staff, low income schools by 2016 with an average retention period of seven years,” according to the budget book. “Ten years and $20 million later, only 200 people have participated in and benefited from the program’s loan forgiveness plan; of those, only 80 are still teaching in Illinois. These are the types of programs that state government can no longer afford.”