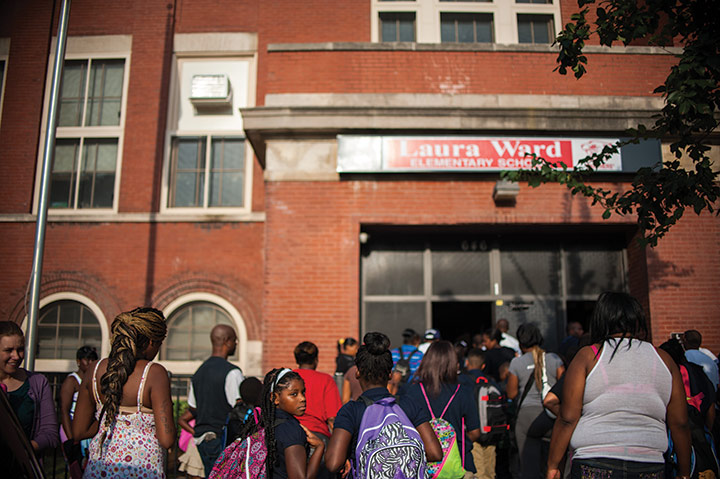 Shuttered schools may be turned into housing for teachers. Ward Elementary was part of the 2013 closings.

Part of Catalyst Chicago’s ongoing coverage on the transition of students after the historic closing of 49 elementary schools in June 2013. Catalyst’s Fall In Depth analyzes the aftermath of these closings.

During the uproar over school closings, CPS officials repeatedly promised that students would end up at better schools and poured millions into “welcoming schools” to improve them. Now, with the revelation that only 60 percent of displaced students enrolled in their designated welcoming school, the academic performance at the schools where they landed becomes an important X-factor, made even more critical by the fact that the Consortium on Chicago School Research has found that closings are only beneficial if students end up in the top-performing schools.

Most of the shuttered schools—80 percent—were rated Level 3, the lowest rating CPS now hands out. A Catalyst Chicago analysis of CPS data found that, in one sense, there’s good news: Overall, just over half of students who went to their welcoming school ended up at schools that were rated Level 1 or 2.

But the analysis also revealed troubling news: Only one-fifth of all students made it to the highest-performing schools, and a significant number landed at bottom-tier schools.

Catalyst’s analysis of the data on enrollment from the 1st, 10th and 20th day of school also showed that more than 2,000 students, including preschoolers and severely disabled students, were not enrolled anywhere on the first day of school. This figure represents about 18 percent of the 11,729 displaced students and is more than double the 7 percent of students whom CPS admitted over the summer were not enrolled.

All but 570 of these students eventually enrolled in a school. Despite the pricey renovations and new resources, the welcoming schools did not attract the bulk of students after the first day. In fact, those schools lost about 80 students between the 10th and  20th day after the start of school.