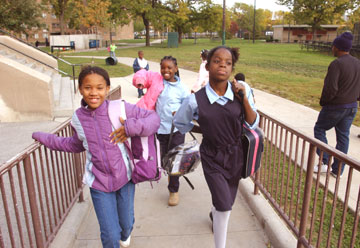 A year ago, Chicago Public Schools CEO Arne Duncan abruptly closed three elementary schools, promising to overhaul and reopen two of them in the fall of 2003. That decision rankled parents and community residents alike and angered leaders of the Chicago Teachers Union, who learned of the closings only hours before they were announced.

Twelve months later, the dust has settled and the rebirths of Williams on the Near South Side and Dodge on the West Side are almost complete. New principals are on board, curriculum and formats are set, and community tensions have eased. The third school, Terrell, will not reopen.

The board has even agreed to delay further academic-related school closings another year, and to work with union officials to provide extra supports for up to 12 struggling schools. (See sidebar, page 23.)

The Renaissance Initiative, as the effort is called, is the School Board’s latest strategy to hold low-performing schools accountable. When the new schools emerge, they will bear a superficial resemblance to other Chicago public schools; the schools’ curricular format and organizational structure will be somewhat unique.

The effort is attracting attention from school districts across the country and has gotten a thumbs-up from U.S. Secretary of Education Rod Paige.

John Ayers, executive director of Leadership for Quality Education, says closing schools may have shocked the system but that radical change was necessary to improve them. “It’s breaking with the culture of failure.”

District officials have high expectations for the new schools, but realize that it will take time for results to show up in student performance, says Hosanna Mahaley, chief of staff to Chief Education Officer Barbara Eason-Watkins.

The following snapshots explain the blueprint for each of the schools.

Williams will house three small schools that eventually will serve students from pre-kindergarten through high school. Each school will have its own principal, and former Beethoven Principal Frances Oden will manage the facility and oversee the after-school programs. Williams will have extra security guards and someone to address social service needs full time.

Each school, however, will exist under a separate agreement with the district.

Only the elementary school will operate as a CPS school. It will enroll up to 340 children in pre-kindergarten through 3rd grade. The principal will be Barbara Williams, a founding director of the North Kenwood-Oakland Professional Development Charter School, which is affiliated with the University of Chicago. Through a partnership with the Erikson Institute, it will provide teachers with ongoing professional development and training in early literacy.

The middle school will be a charter school run by the Knowledge is Power Program (KIPP), a San Francisco-based nonprofit that has opened successful charter schools across the country. KIPP plans to enroll 400 children in 4th through 8th grades and has hired Sarah Abella, a KIPP fellow who once taught at McDowell and Penn, to serve as principal.

KIPP is known for taking students who are far below grade level and getting them back on track. Abella expects it will do the same for its students here, most of whom will be returning Williams students. If seats are still available, Abella says she will begin recruiting students from the surrounding neighborhoods.

The curriculum provides students with a strong base in core subjects to prepare them for high school, Abella explains. Kids will get a head start in a three-week session this summer that will determine students’ ability levels and will begin to build school culture.

For the high school that will be housed at Williams, CPS contracted with Big Picture Company to launch a high school modeled after its successful program in Providence, R.I. Students at the MET, an acronym for the Metropolitan Regional Career and Technical Center, spend three days a week in class and two days working at off-site internships. Up to 15 students are assigned to an advisory team led by a teacher, who works with each of them to create an individualized college-prep curriculum. All students are required to apply to college.

Kothyn Alexander of Big Picture Company, previously a co-director of a public high school in Boston, has been named principal. The school will be open to 30 freshmen this September, and will expand to 120 students through 12th grade in four years.

A local school council will be elected next spring to govern the elementary and high schools. As a charter school, KIPP will be run by its own board of directors with input from parent and other advisory committees.

Minor capital improvements will be made to the Williams facility as well. When it reopens in the fall, the school will have a fresh coat of paint, a sidewalk to the main entrance, new floor tiles and several new pre-K classrooms. The cost: $1.5 million.

The Academy for Urban School Leadership, which trains career changers to become teachers, has contracted with CPS to operate Dodge as a site for teacher training. Dodge will mirror the Academy’s other training site, The Chicago Academy.

Each classroom will be led by a master teacher who will mentor two student teachers. Patricia Bauldrick, principal at Bontemps Elementary, has been named principal. The school also will employ additional security guards and a full-time social worker.

Dodge is expected to enroll just over 400 students in pre-K to 8th grade next year, and grow over two years to accommodate 500. Students who were displaced when Dodge closed will have priority to return; the remaining seats will be available for children from the neighborhood or other areas. However, bus service will not be provided for students who live outside the community.

As a so-called contract school, Dodge will not have a local school council. Rather it will have an elected advisory committee consisting of parents and community residents. A representative of the committee will be selected to sit on the board of the Academy for Urban School Leadership.