When Krishna Rimal left a refugee camp in the South Asian nation of Bhutan for Chicago, he dreamed of a better education for his two children.

After the family arrived in December, Rimal’s son was quickly enrolled in 1st grade.  But his daughter, Anisha, who turned 5 after Sept. 1, has been unable to get into preschool. She is not eligible to enroll in kindergarten until next year.

Social workers at Heartland Alliance, a refugee resettlement agency that is helping the family with English classes and job training, told Rimal that free preschool is available, but they don’t have time to help him find one and fill out the paperwork.  Rimal doesn’t speak enough English to do it himself.

Ashley Ginter, youth case manager at Heartland, has given the family some paper and crayons for Anisha, but says she can’t do more. Ginter has a caseload of 140 children from kindergarten to 12th grade.  “There would need to be another person, part time, to help with all the families with young kids,” she says. “We just don’t have the funding.”

Experts in early childhood education say that children of immigrants and refugees benefit tremendously from preschool. At the very least, they expand their English vocabulary at an early age. But their parents’ poor English skills and lack of awareness keep many of the kids at home.

Just 46 percent of children of immigrants were enrolled in preschool, compared to 63 percent of other children, according to a 2006 study published in Social Science Quarterly. One of the study’s co-authors, Katherine Magnuson, says that the gap for preschool is striking, considering that there’s no such discrepancy when it comes to enrolling kids in kindergarten.

“We have almost universal enrollment at age 5 to enter kindergarten [nationally],” says Magnuson, an assistant professor of social work at the University of Wisconsin.  “All we need to do is roll that back a year.” (State law does not require enrollment until age 7.)

Magnuson says that among many immigrant families, preschool is not considered important because it’s not required. Plus, enrollment in kindergarten tends to be easy—parents just show up at their local school. Preschool lacks a unified system, which can be daunting for those who don’t speak English.

“It’s a fragmented set of different providers—it’s Head Start, it’s pre-k, or even just local providers that contract with the school system,” Magnuson says. “There are all these hoops you have to go through.  It takes help navigating the system.”

Until a year ago, families being served by Interfaith Refugee and Immigration Ministries weren’t offered help enrolling their children in preschool.  Amy Hill’s job as acting youth program coordinator didn’t include the younger children. But Hill says she was bothered by seeing several families with kids at home during the day. As a former teacher, she said she knew the kids “would already start school at a deficit because of the language.”  So she began investigating preschool programs.

Even for Hill, the process of getting an immigrant child enrolled in preschool was confusing and laborious. Not every elementary school offers preschool, so calls have to be made to the district’s early childhood education office to find out what is available in a certain neighborhood. Some programs fill up as early as the previous year.  More slots are available in half-day programs, but most families need full-day because of childcare issues. Applications can be complicated because families must prove that they meet income guidelines.

And sometimes, enrolling isn’t as simple as filling out some forms. Hill says that she had to call one school several times after turning in Head Start applications last spring for two children from Burundi and one from Burma. She eventually discovered that the school required all parents to meet in the fall for an interview process. Nobody was given an appointment, so many parents had to show up for several days to get an interview.

Knowing how much difficulty she had, Hill says families “on their own, would have never been able to do this.” Just 15 percent of the 120 kids on Hill’s caseload are preschool age, but she estimates spending a disproportionately greater amount of time working on their enrollment.

“They need to make it more uniform throughout,” Hill says of preschool enrollment policies. “There needs to be one way to do it, and one schedule.”

Once the kids are enrolled in preschool, she and their parents quickly see the benefits.

One Eritrean girl who is enrolled in preschool at Swift Elementary in Edgewater began the school year not knowing any English, Hill says.  But a few months later, the child became a leader in her classroom.  “She speaks great English,” Hill says. “She knows what school is, and what’s expected of her. She’s going to start kindergarten knowing her letters and colors and numbers.”

For some immigrant parents, the barriers to preschool are cultural, rather than bureaucratic.  Families with relatives available for childcare may opt to have their kids stay at home, rather than take them to preschool.

Wendy Thompson, preschool director for Albany Park Community Center, says that some parents were not educated in their own countries and don’t understand that education can begin at a young age.  In their experience, a 3-year-old belongs at home. Other immigrants view school as a place where learning is done through reading and rote memorization—and they don’t see that at the preschool.

“They think the kids are just playing,” says Thompson. “They don’t understand that there’s learning happening as the kids are playing.”

Thompson says the community center gets the word out about its preschool programs by tapping parents who are already involved in other services offered at Albany Park, such as English classes and the food pantry. Albany Park’s center has some 60 children enrolled in Preschool for All; another 230 are in Head Start.  Ninety-eight percent of the kids are classified as English language learners; and their families are originally from Latin America, Africa, the Middle East and Eastern Europe.

In one preschool classroom, paper snowflakes decorate the windows. Finger-painting projects hang on the walls, and the cubbies are filled with wooden blocks, alphabet games and picture books.

One recent day, five children gathered around a teacher to learn about patterns. She was showing them how to place colored squares of paper in a sequence of three.  “Yellow, teal, and purple,” she says, as children repeat after her.

After a few weeks of preschool, many immigrant parents change their initial view that the preschool is just a day care or play center, says Thompson.

Thompson recalls one mother bragging that her child was speaking English so well, she could no longer understand him. Other parents report that their kids are more involved at home, volunteering to help set the table and clean up. Some moms are spreading the word about the benefits of pre-k to others. Preschool becomes an education for both children and their parents, Thompson says. 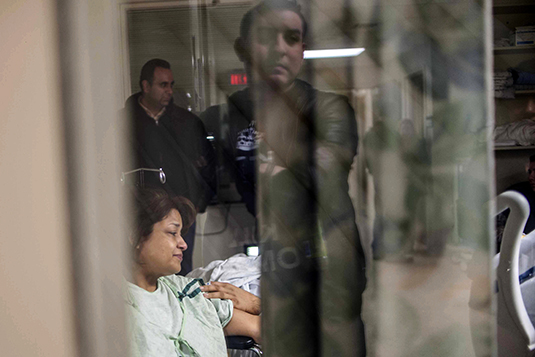 8:06 p.m. Lopez arrives at her son’s room and immediately tears up. She was filled with joy—the surgery went well.