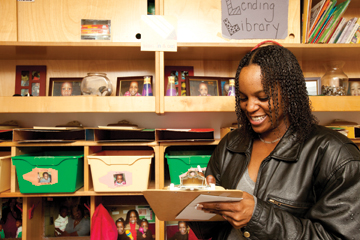 Parents whose children attend Educare early childhood center in Grand Boulevard get an education in how to navigate Chicago’s maze of school choices and in how to prepare their little ones for kindergarten.

Educare houses one of the few preschools in the city that focuses on the preschool-to-kindergarten transition. Through ongoing research on the program’s results, staff members also stay in contact with their students and the students’ families as they move through elementary school—something that is often hard to do.

But all the staff and resources to provide this extra attention is not cheap. Educare costs upwards of $18,000 per child, per year, compared to the average $8,700 per student at private centers for 4-year-olds.

The focus on the transition starts early on in the child’s last year of preschool. In the fall, representatives of magnet and charter schools visit the center to give parents information about their application deadlines.

“We refer families to the websites so they can gain information about [a school’s] performance,” says Brenda Eiland-Williford, director of program and curriculum at the Educare Center. “We talk about the teacher-child ratio. We talk about the way parents can get involved in the school.”

In the winter, staff set up a formal transition meeting with parents to talk about how much their children know and what they need to work on to get students ready for kindergarten. And at the end of the school year, staff members reiterate the message in their final home visit to parents.

“It’s very important that parents know about what we’re doing in the classroom to help prepare their children,” Eiland-Williford says. “[But] it’s important that they don’t think that’s the role of the teacher, that they know there are things they can do at home.”

Once admissions lotteries take place, Educare staff help parents deal with the reality of where students will end up. “We talk to them about how they can become competent advocates for their children once they get into the school,” Eiland-Williford says.

Parents also provide a valuable feedback loop for the program. After some parents noticed math was a struggle for their kindergarten students, Educare began training its teachers on math instruction and activities, and increased the quantity and quality of math-related materials available in classrooms.

“We had workshops with parents around using math and math language in the home,” Eiland-Williford says.

Educare builds a strong foundation for coaching parents through the kindergarten transition by getting them involved during the infant and preschool years.

The facility’s new $2.7 million parent wing, which opened in December, hosts twice-a-month breakfasts for parents, physical fitness groups, and support groups for everyone from teen parents to grandparents raising children. It also is equipped with a 16-computer work center.

Parents who drop off children fill out “daily notes,” noting the time a child wakes up in the morning, the last time they ate, and any health concerns.

“Asthma Alert,” writes parent Beverly Traylor, who is dropping off her 3-year-old twin daughters. “No milk, no juice, no water play.”

At the end of the day, the note is returned to parents with a log of children’s activities and “special moments,” and information about any issues that arose.

“It comforts me because I know we have some communication going,” Traylor says.

Hundreds of pictures line the Educare Center’s walls, many of them on classroom panels that detail students’ work. “Parents are always going up to them, looking for their kids,” Eiland-Williford says.