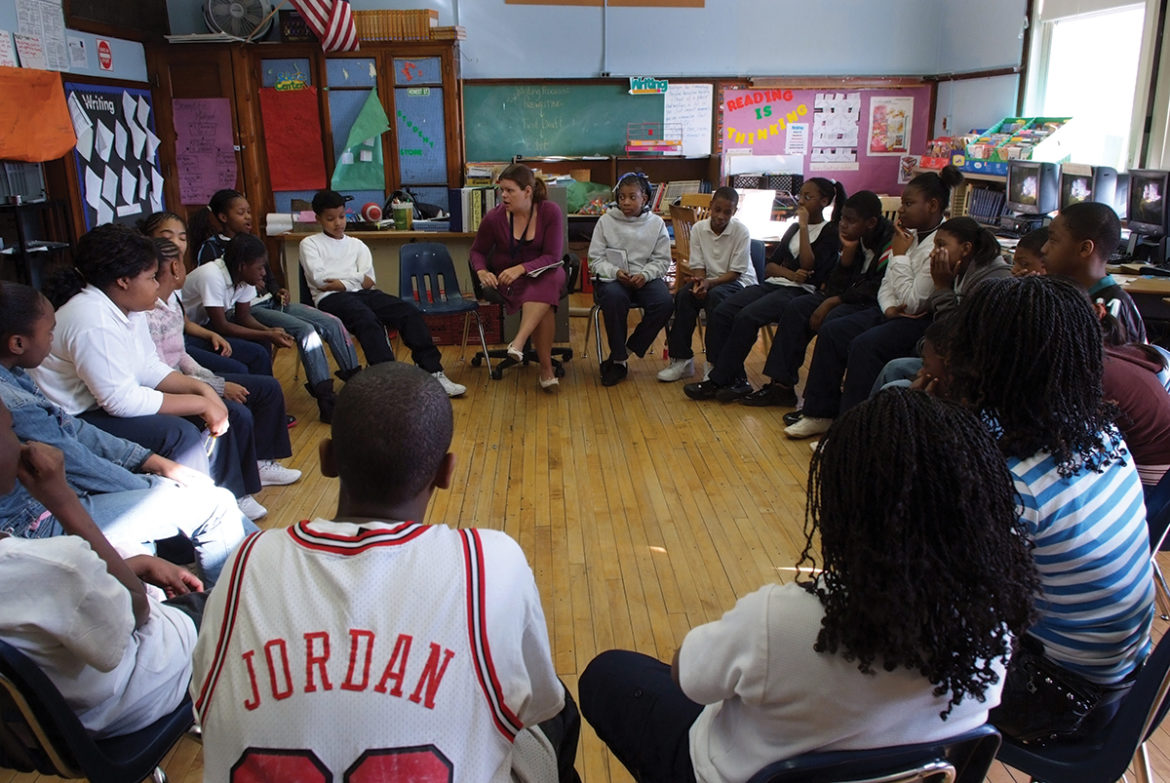 Hay Elementary in Austin has long been a leader in social-emotional learning. A lesson is shown in this 2008 photo.

In 2004, Illinois became the first state to require schools to teach social-emotional skills and to create curricular standards and benchmarks. Shortly after, the Chicago Public Schools adopted a policy that committed the district to train all school personnel in the area, and develop age-appropriate programs to help students manage their emotions, set goals and build better relationships with peers and teachers.

Bringing this goal to life isn’t easy in CPS, where social-emotional learning, or SEL, has waxed and waned in schools depending on leaders’ commitment to the idea and whether money is available for training. However, the new requirements have slowly but steadily pushed CPS toward a more systematic approach. In 2008, a group of schools with track records of commitment to SEL began implementing evidence-based SEL programs, including Hay Elementary in Austin and Pilsen’s Spry Elementary.

See “Suspensions up in CPS,” and “Teaching kids to cope.”

Over the years, CPS has worked closely with the Collaborative for Academic, Social and Emotional Learning, or CASEL, to train teachers and develop programs for all students as well as targeted programs for those students who need more support in managing their emotions and relationships. In recent years, CPS has added a specialist in social-emotional learning to network teams and trained staff at 180 schools in evidence-based SEL curricula.

The movement away from punitive discipline and suspensions also helped spark SEL. Many schools have received coaching in restorative discipline practices like peace circles and peer juries. But a report on suspensions from the University of Chicago Consortium on School Research indicates that SEL has yet to make inroads in low-income high schools, where students arguably could use the most social support.

How SEL will fare given the current budget crisis remains to be seen. “I think SEL is here to stay, but that doesn’t mean it won’t be without challenges,” says Karen van Ausdal, who until recently led the Office of Social-Emotional Learning. She now works with CASEL as director of practice, partnering with school districts around the country, including Chicago’s.

One challenge has been to ensure school staff fully embrace the importance of SEL, especially when they are under pressure to improve academic performance.

To recognize schools that are leading the way, this year CPS launched a Supportive Schools Certification, somewhat like the arts and healthy schools certifications already in existence. The application process includes a half-day site visit, where a team observes classes and interviews teachers and students. The on-site aspect helps ensure “we can say with authority these are schools that embed SEL,” van Ausdal says, adding that 198 schools applied and 36 earned the highest rating, including Chase Elementary.

Nationally, interest in measuring SEL skills is increasing because of changes in the federal Every Student Succeeds Act. While some SEL advocates have suggested that states adopt SEL measures as part of their new accountability systems, experts caution those measures are not ready to be used for that purpose. Washoe County Schools, which includes Reno, Nevada, has been a leader among districts in developing SEL assessments and has invited students to help refine its measures.