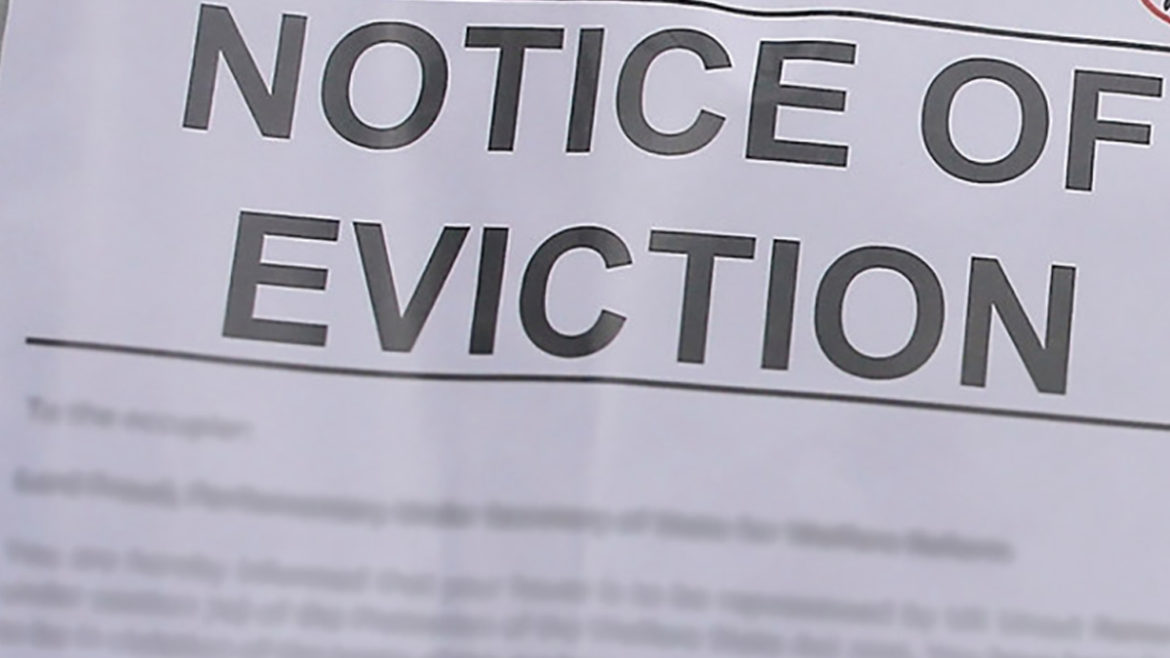 LONDON, ENGLAND - APRIL 13: An eviction notice is held up as UK UNCUT supporters protest over the government's changes to the welfare system and the proposed 'Bedroom Tax,' on April 13, 2013 in London, England. The anti-austerity campaigners gathered outside the North London home of Lord Frued during a day of action, after they promised to target the home of a "well-known millionaire." (Photo by Dan Kitwood/Getty Images)

Chicago eviction rates significantly decreased in 2020 due to the statewide eviction ban, but it has not mitigated the risk of evictions for residents, particularly on the South and West sides.

Thirty percent or more of renter households are predicted to face the risk of eviction this year, according to an Aspen Institute report. For Chicago, that would mean more than 20,000 evictions, according to a report by the Lawyers’ Committee for Better Housing and Loyola University Chicago. LCBH reported that “majority Black areas continue to have eviction filing rates substantially higher than in other parts of the city.

“The new data shows that majority Black areas had eviction filing rates five times higher than majority white areas, while rates in Latinx neighborhoods were twice as high as those in white areas,” as stated in an LCBH news release on Dec. 17.

Michelle Gilbert, legal director for LCBH, said the major gap in eviction filing rates is due to the historic inequity and wealth accumulation within South and West side communities.

“That disproportionately impacts people on the basis of race,” Gilbert, who represents tenants in eviction court, said. “African Americans are more likely to be evicted. It is not just about income, it is about race.”

On March 6, the Illinois statewide ban on residential evictions will be lifted after a year of prohibiting the filing of residential eviction actions, except for those who posed major health or safety concerns, but in January, the Centers for Disease Control and Prevention’s national moratorium was extended until March 31.

After the statewide eviction moratorium expires, the ban will be extended in Chicago for 60 days. After that, landlords can file eviction orders, but must give tenants 12-day notice rather than five days.

In 2019, the Just Cause Eviction Ordinance was introduced, and supporter Ald. Byron Sigcho-Lopez (25th) said the bill, which addresses Chicago’s crisis of inequality and racism in housing, is meant to create stability in vulnerable communities, such as some on the South and West sides.

Sigcho-Lopez said there must be applicable legislation that invests in tenants. The bill is currently sitting in the housing committee waiting to be reviewed.

“When you look at the number of [eviction] filings and the shortage of affordable housing, we all have to be responsible … housing is also a public health matter,” Sigcho-Lopez said.

According to LCBH data, between 2010 and 2019, 1 in 25 Chicago renters and their families faced eviction each year. The data shows that annually, there are 22,571 eviction filings, and 60% of those filings end in eviction. In those cases, 80% of landlords had lawyers, while only 11% of the tenants had lawyers. In 2019, there were 18,220 eviction filings per month.

Gilbert said there were around 6,770 eviction filings in 2020, which includes commercial evictions but those filed by the Chicago Housing Authority.

“Based on my experience representing people in court in 2020, there’s no difference from what our earlier years of data indicate, that eviction largely impacts people of color,” Gilbert said, adding that most of the tenants she represents live on the far South side.

Last year, Dixon Romeo helped organize the group Not Me, We after witnessing silent evictions in his neighborhood in South Shore. The organization is meant to support people during the housing crisis, which Romeo said has been in full-swing for years, with the pandemic only worsening it.

In South Shore, Romeo said he has seen landlords “bend or break the law,” performing illegal lockouts and shutting off tenants’ utilities.

“It’s tough dealing with that in normal times but it’s especially tough now because you can’t get to the courts, and there’s no real support for most folks,” Romeo said.

Matthew Payne, an attorney at The Payne Law Office who practices landlord-tenant law, represents landlords and said it is not often talked about how the loss of rent has impacted them. Property owners rely on rent from tenants in order to sustain their own income and Payne said he has seen landlords do their best to avoid filing for eviction.

In January, the Emergency Rental Assistance program made $25 billion available to states, U.S. Territories, local governments, and Indian tribes for households that are unable to pay rent and utilities due to the pandemic. Illinois received around $835 million, but Barrett said it is unclear which communities the money is allocated to.

Alo“ It’s  not talked about very much because everyone is concerned about tidal  evictions,” Payne said. “Landlords are people too and they’re struggling just like tenants are struggling.”

Tenant unions have been particularly active this past year, including the coalition Chicago Tenant Movement (CTM), which came to fruition last summer. The coalition works as a collection of nine smaller organizations with the mission of providing resources to communities that help organize tenants to build their own unions.

Since June, Valerie Barrett has served as an organizer with CTM, and has often been on-the-ground in assisting tenants with lockouts, which she said mostly occur on the South and West sides. She once attended five lockouts in one day and said they typically involve calling a tenants’ landlord, turning utilities back on and helping them re-enter their living space.

The coalition is available to help tenants organize, educate them on their rights and provide necessary resources.

Barrett said this year she has witnessed an “invisible housing crisis,” as people are self-evicting on the South and West sides to avoid eviction court.

Gilbert said she encourages landlords and tenants to openly talk to each other because evictions are a “lose-lose situation,” with landlords losing money and tenants being stuck with it for a long time, impacting future housing or purchases, such as a house or a car.

Sigcho-Lopez said he has seen the “violence in evictions” near his home in Pilsen and how it impacts whole communities, and Barrett added that to avoid the trauma of evictions, neighbors need to mobilize and support each other.

“Evictions should be the last resort. When we have stability in our neighborhoods, we have a robust and healthy economy,” Sigcho-Lopez said.