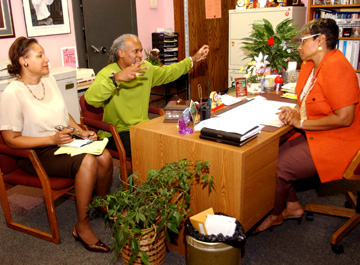 Last year, several boys who were wards of the state and lived together in a group home repeatedly missed classes and caused trouble at Corliss High School.

Principal Anthony Spivey declines to share details, but says their discipline problems were severe enough for him to know them personally in a school of over 1,000 students.

This year, he says, only one of them has landed in his office. For the most part, the boys are better behaved and attending school regularly. What made the difference is Project STRIVE, a program funded by the Department of Children and Family Services that places counselors and social workers in CPS schools with large numbers of foster children.

STRIVE stands for Strategies to Rejuvenate Interest and Value in Education.

Now, two STRIVE counselors work at Corliss—one full time, one part time—and they regularly track down absentees and counsel wayward students. They also talk to suspended students before those students return to class and help them figure out ways to avoid future trouble.

“It was God-sent,” Spivey declares.

Since it was piloted three years ago, STRIVE has improved the academic outlook for foster children in the 10 schools where it operates, according to school and DCFS officials. DCFS pays two social service agencies a total of $1.5 million a year to place counselors and social workers at those schools. The attendance rate of high school wards who worked with STRIVE counselors is higher than the CPS district average. Last year, all but one of the 32 seniors STRIVE worked with graduated, and half went on to college.

STRIVE counselors keep track of foster children’s attendance and make calls and home visits quickly when they fail to show up at school. They also offer guidance and organize support groups to address emotional issues such as grief.

“It’s definitely making a difference,” says Rosemary Dawson, a staff counselor at Calumet High School. “In a lot of cases, if you don’t have anybody working with [wards] they get discouraged and they don’t come to school.”

The extra counselors and social workers also pick up some of the slack in CPS supportive services by helping other students who are not part of the child welfare system, a measure that helps protect wards’ identities. “Our kids are very stigmatized,” notes DCFS education specialist Krista Hinton.

“The dirty little fact is that DCFS wards do not succeed in school,” says David Simpson, who oversees STRIVE counselors at Youth Guidance, one of two agencies contracted by DCFS. “It’s hard for a caseworker with 20 [foster children] to know the 10 schools they are in.”

The other agency that oversees STRIVE counselors is Metropolitan Family Services.

But STRIVE only reaches a small fraction of the thousands of foster children in CPS schools who studies show are more likely to miss school and eventually drop out before graduating. Last year they served 373 wards. Of those wards, 322 were in high school. Their daily attendance averaged 87 percent, just above the 86 percent average for high school students systemwide.

Foster children need more social and emotional support than public schools are currently financially able to offer, Spivey says. “We need all the support we can get.”

Not surprisingly, STRIVE scores well overall with principals who are participating in the program. “They told me it was doing great,” says Lillie Winston, who oversees a CPS program for foster children and serves as a district liaison to DCFS. Winston met with principals over the summer for a year-end progress report.

The tiny program began as a pilot in 1999 at Oglesby Elementary, a school where a sizeable population of current and former state wards were enrolled.

Principal Jo Marie Cooper was glad to get extra support to help students adjust. Before STRIVE came into the picture, the local school council had earmarked a big chunk of the school’s discretionary money to pay for a full-time psychologist to counsel students. “We know that a child is not just a brain,” Cooper says. “A child comes to us with needs—emotional, physical, spiritual. If you’re all pent up emotionally, and I ask you to do an algebra equation, your mind is not on that.”

Hinton, who was a caseworker then, visited Oglesby and learned the school was interested in finding ways to provide wards with extra support. At the time, DCFS had hired Youth Guidance to counsel children outside of schools, but the agency had decades of expertise working inside schools. (Coincidentally, it was in 1999 that DCFS first received data on how their wards were faring in school, and they were not doing well.)

When they first arrived, STRIVE counselors decided the best way to learn about the school and its neighborhood, Auburn-Gresham, was to track down truants. In the process, Oglesby’s overall truancy rate was reduced by nearly 75 percent.

At the same time, STRIVE counselors were able to get to the bottom of children’s behavior and academic performance problems, something that teachers often don’t have time to do. Angela Lampkin, a 6th grade teacher, recalls the program helped her reach a difficult student. “She didn’t want to read in front of the class or go to the board to do math problems,” Lampkin recalls. “I didn’t know why, because she could do the work.”

The counselor visited the girl’s home and learned that she had taken responsibility for looking after her siblings and doing household chores. The counselor advised Lampkin to work with her one-on-one rather than in front of a group. “Once I did that, things started to turn around,” Lampkin says. “It helped me to remember that her self-esteem was low.”

Schools that want more than one social worker have to hire the second one with discretionary money, but that rarely happens, says Karen Sykes, who heads up CPS pupil support services.

DCFS expanded STRIVE at schools with high numbers of foster children by hiring two social service agencies to provide the counselors. While CPS social workers must watch out for a wide range of children and their needs, STRIVE counselors have a more targeted mission. “Our workers know all the wards,” says Simpson. “A kid gets real angry in class and the worker is able to sit down with the child and the teacher, so there’s no more problem.”

However, STRIVE has its limits in the toughest family situations. A STRIVE social worker reached her limit working with a Fenger High student who stopped coming to class. The social worker tracked down the girl’s address and paid her a visit only to learn that she had been kicked out of the house for attacking her grandmother.

“We’re still having a real problem with her attendance, says attendance coordinator Dortha Butler. “It’s not getting any better.”

To make sure teenage wards stay in school, one STRIVE social worker keeps tabs on his 8th grade wards after they graduate elementary school. John Zeigler says most of his graduates are enrolled at Calumet, so he asked STRIVE workers there to let him know how his boys are doing. “They will let me know about the boys’ academics,” says Ziegler, who also keeps in touch with wards who attend other high schools, often by going to a freshman football game.

“This program doesn’t end,” he says.

But it could, cautions Simpson. “My fear about STRIVE is it could be a flavor of the month.” Mary Sue Morsch, DCFS executive deputy director, says her agency has no plans to cut STRIVE. Expanding the program could be tough in this year’s fiscal climate, however.