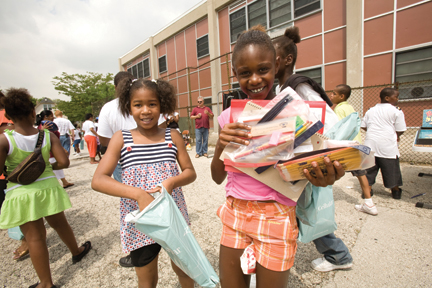 On the eve of a February meeting where the death knell was set to sound for five Chicago schools, CEO Ron Huberman granted Paderewski Elementary on the West Side an 11th-hour reprieve.

The decision had nothing to do with education or finances. Instead, Huberman said he changed his mind after walking to Mason Elementary, where Paderewski’s students would have been sent. Mason wasn’t close by, but had higher test scores than Paderewski. Huberman had promised not to repeat the mistakes of the past: closing one bad school only to send students to another one.

On his walk to Mason, Huberman had to cross a wide intersection of four streets—a situation he concluded was too dangerous for students.

The decision might have yielded relief for teachers, parents and students in the short term, but in the coming years, the next mayor and school leader will have to confront a longstanding question: What should be done with schools like Paderewski, with dwindling enrollment and little academic improvement?

Over the past decade, the list of the worst elementary and high schools—those in the bottom 25 percent on the Illinois Standards Achievement Test—has barely changed. Only one in every three schools managed to make it off the list. Still, the worst schools of today are arguably better than they were 10 years ago. Across the board, their test scores have gone up (although changes to the ISAT made the test easier). Attendance is up slightly in the elementary schools, and the dropout rate in the worst high schools has improved by 10 percentage points—though it remains at a troubling 54 percent.

Graduation rates “are not really horrible anymore, but they aren’t really good,” says Elaine Allensworth, senior director and chief research officer for the Consortium on Chicago School Research at the University of Chicago.

To foster overall school improvement, most experts agree that five factors are needed. One is a superstar principal. That principal has to be deft at forging strong ties between the school, parents and community. He or she must hire good teachers and provide opportunities for them to continually improve. A rigorous curriculum and a safe, welcoming climate are needed. With these “five essential supports,” Consortium researchers found, even the worst schools improved.

Yet too often, the mayor and school officials have rolled out big-name initiatives that address one part of the puzzle and leave the other pieces to fester, Allensworth says. For example, High School Transformation brought in better curricula and teacher training, but ignored the need to forge community and parent ties.

The worst schools are not only bad in academic terms, they are increasingly a bad financial bargain as well because of shrinking enrollment. The 126 worst elementary schools have lost, on average, a third of their students since 2000. Districtwide, the number of neighborhood elementary schools with fewer than 300 students has tripled in just five years to about 75. Experts say schools need at least 350 students to be financially viable.

“It is completely inefficient,” says Timothy Knowles, director of the University of Chicago’s Urban Education Institute and a former deputy superintendent in Boston. “In a city and state with so many budget problems, it is irresponsible to have so many under-utilized schools.”

Paderewski, in a small, mostly black area of South Lawndale, is in a census tract where the number of school-aged children has declined by 48 percent since 2000. The rest of South Lawndale is predominantly Latino and has a burgeoning population of children.

But Paderewski’s shrinking enrollment also is due, in part, to competition—a factor that the the district created. North Lawndale, a quick drive down Central Park Avenue from Paderewski, is home to more new elementary schools than any other community in the city, including four charters and one magnet school.

Indeed, one of the ways Mayor Richard M. Daley and his hand-picked CEOs have set out to improve the worst schools is to shift attention away from them and instead, open new, presumably better, schools. The problem with that tactic is two-fold. First, it’s not easy to create a good school in a neighborhood with concentrated poverty. Only 16 of 93 new schools have reached the state average on the ISAT.

Second, neighborhood schools have been largely left out of the private dollars flowing into the system, mostly to charters.

With enrollment shrinking, it is not clear that new schools are needed. Since 2000, the CPS student population has fallen by 8 percent. During the same time, CPS closed 47 schools that enrolled 19,528 students but added 96 schools that enroll 48,000—a net gain of about 28,000 seats.

Meanwhile, CPS has begun to tread lightly on school closings, which created logistical nightmares and a political quagmire.

The unrest caused by school closures was a key reason former CEO Arne Duncan initiated “turnarounds,” in which students continue to go to the same school but most staff are fired and schools get extra dollars.

Seventeen schools have become part of the turnaround program since 2008, and the initiative is now the district’s prime school improvement strategy. Management of 10 of the schools has been outsourced to the Academy of Urban School Leadership.

Many turnaround principals paint a similar picture of their schools, pre-turnaround, as chaotic. Before the Academy was handed management of Bradwell Elementary in South Shore, the police were called to the building nearly every day, says new Principal Kimberly Henderson.

“This was more like a juvenile detention center than a school,” she says. “The kids had control of the building. Teachers couldn’t teach.”

Henderson decided to hire 11 men whose sole job would be to monitor the halls and make sure that students were headed in the right direction at all times. These men, all dressed in business attire, stand with students as they are lined up to use the bathroom. They sit with primary-grade youngsters who need a time-out for unruly behavior. Sometimes, they give pep talks to students who are having a bad day.

Henderson has taken other steps to set a better mood in the school. Inside, it smells sweet. “Air fresheners,” says Henderson. The walls have been repainted. Plants sit on the landings between stairwells. Bookshelves and beanbags, cozy places for students to read, are set up.

Shujuana Lovett, one of only two teachers hired back, confirms a dramatic difference. “We’ve gone from many disturbances to hardly any,” she says.

Still, Lovett isn’t sure that most of her colleagues had to be fired for the school to make progress. Previous principals, she says, never got their footing and teachers always felt as though they were being pulled in a new direction. Henderson is Bradwell’s fourth principal in 10 years.

The big question for Henderson and other turnaround principals is whether they can translate changes in school climate into academic improvement. It is early in the game, but turnaround high schools have yet to show marked improvement in test scores.

Other questions abound. For example, how many good teachers exist to take the place of those fired from turnarounds? And will young, energetic new principals stay on the job long enough to make the turnarounds a success?

Before turnaround decisions are made, the district must first decide which schools to save. What happened to Paderewski is a classic story of CPS officials making three mistakes: predicting future enrollment incorrectly, planning badly and then not being willing to make a hard decision.

Five years ago, Duncan brought in Jo Ann Roberts to take over at Paderewski. Roberts describes the building she walked into as atrocious. She takes out a photo album and points to shelves filled with overflowing boxes, tables covered with papers and a science room with filthy cages of iguanas and turtles. Other pictures show bare classroom walls and bulletin boards.

Duncan gave Roberts $10,000 to buy new furniture. She got the building painted from top to bottom. She stocked resource rooms with learning materials. She pushed the teachers to get students’ work up on the walls, as well as posters with visuals such as multiplication tables and vocabulary words.

In the past five years, Paderewski’s test scores have improved, from about a third of students meeting or exceeding standards in math and reading to about half.

One fall afternoon, Roberts, a drill sergeant in a pink suit, pores over math and science scores with teachers. The results are sobering. Only one to three students in each class scored average or above average. Roberts pushes the teachers to think: “What are the kids missing? What are you doing to fill that hole?” She gives them two days to come back with an action plan.

Last winter, when Huberman made the announcement about closing Paderewski, Roberts says she was heart-sick. All the years of hard work seemed to be for naught. “This is where the heavy lifting is done,” she says of her school.

But when asked how the district can justify keeping open a school with only 142 students, she has no good answer. “Send me more.”