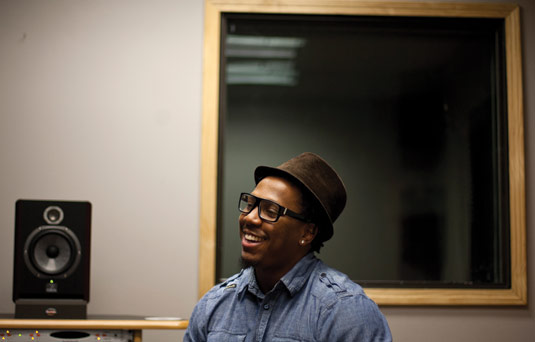 At Options Laboratory School, Dyryl Burnett is trying to teach “the way of the world” to his students through music, in the same way his high school music teacher did many years ago. Photo by Lucio Villa.

Dyryl Burnett takes off his brown fedora hat as he steps in front of the classroom. All 23 of his students are early for class—the first after lunch—and he waits for a moment until chatter softens, music videos are paused and eyes turn toward him. The banter soon follows.

“Ooo, Mr. Burnett has his jazz hat today,” one student announces, prompting a chorus of giggles and petitions for him to put it back on.

Burnett breaks into a big smile. “You’re always messin’ with me,” he laughs and somewhat bashfully places the hat back over his short dreads.

The simple fact that Burnett can so effortlessly command his students’ attention is a testament to his  popularity and the draw of his “Life in the Music Industry” class. It’s also no small feat considering that many of the students didn’t thrive in a traditional academic setting before they arrived at Options Laboratory School, a charter high school that opened its doors in 2011.

The school was founded by a Kenwood-based nonprofit, Little Black Pearl, following the organization’s mantra of teaching art as a positive outlet for Chicago’s youth. The school targets students—now numbering more than 175, ages 16 through 19—who are artistically inclined but struggled academically in the past. Most are from poor and disadvantaged neighborhoods on Chicago’s South Side.

Burnett, who grew up on the West Side and in the west suburbs, can relate to his students’ challenges, from the allure of the gangbanging lifestyle to difficult relationships with their parents.

Burnett and his students also share a passion for music. In his class, instead of teaching music theory to his students, Burnett directs their attention to music making.

Last year, their first year together, Burnett and his students created a mock record label and a full-length mixtape. The label, named Jet Lag, now has its own logo and printed T-shirts—all student-designed. The name for their album, “#TakeOff,” which features 11 student voices, was a student’s idea, too.

The students all hope to create another mixtape this year. Burnett is hopeful, too, but this time the students’ ability to go into the studio will depend upon their grades, he said.

These projects are Burnett’s attempt at combining something they love—hip-hop music—with the process of working toward a goal. In doing so, Burnett said, he is teaching lessons larger than music. “Music allows me to teach life to them. That’s what I am attempting to do,” he said.
Burnett recently sat down with The Chicago Reporter to talk about his work.

How did music become a part of your life?

I started to get into music because it was a way I could finally express myself without anyone interrupting me. My relationship with my father wasn’t the best. My way of releasing that anger, that stress, was just to write [music]. In high school, there was a teacher by the name of Mr. Atcher, who came during my junior year and introduced me to the studio. He came in just as the band director with a mic. When someone finally allowed me in the studio, I was like, ‘OK, I’m hooked. Now I can finally do what I’ve been wanting to do. I can make music.’ Mr. Atcher also taught me to produce my own tracks. I was ditching classes to stay in the studio, and he would let me. I was so into it. I always tried to stay in high school longer because I didn’t like going home to my father. It was just something that I was very passionate about and was ingrained in me because it allowed me to express myself. When I listened to music, I felt like it was talking to me. When Mr. Atcher came and showed me all of this, I didn’t know about it. I actually didn’t realize until this year that, hey, I am kind of doing something like what he did.

What lessons do you teach through music?

In December, all the students were asking me, ‘When will I get in the studio?’ I told them, ‘When you’re ready.’ One thing that their generation really deals with is wanting to feel like they are needed in today’s society. Getting them into the studio is one of my ways of making them feel like they have a sense of purpose.

I want my kids to know, just because you see such-and-such on TV, living this lavish lifestyle, you don’t know what that person is doing when he is not on camera. They are doing a lot and staying up all kinds of hours to do a song or to write a verse or to make sure that their publicity is happening in the right way. I wanted them to get the full picture of the music industry.

They learn more from the streets than from their parents or their teachers, so how can I change or transform someone who is on the streets 24 hours and here—if they choose to be—one hour? That’s hard. That’s what we are competing with. They are not just about to open up themselves to someone they don’t trust; it’s just not going to happen. They are going to have that force that separates them.

They think, ‘OK, I see, Mr. Burnett is strict but yet he allows us to laugh and to talk about issues. I see he is concerned about me and whether or not I do well in class.’ When they see that, they open themselves up bit by bit. Not to say they are not going to be teenagers, but I want them to open up to me so I can teach them the way of the world—not just the topic or the subject in this classroom. Music allows me to do that because it’s innate enough in our system. It’s in us.

What are some of the challenges that your students face outside of the classroom?

Some are dealing with their identity—we have students who are homosexual. For some, all they know is gangbanging and drugs and killing and hustling.

The current generation deals with a lot, and it’s because of my generation and the generation that taught me. We are not teaching our kids how to be adults. We teach them how to survive, and that could be a good or a bad thing. Good because at least they have the common sense and the street sense to survive. Bad because they don’t know they have opportunities to reach a higher level.

How did you develop your relationship with your students?

I started building those little relationships—‘Such and such, how’s your mom? How are you doing? Is there anything going on at home?’ After a while, they started opening up to me. There was a student who said, ‘I don’t think I’ve ever seen a teacher laugh.’ So I was opening up as much as I can to them in a professional sense but also in a mental sense to let them know, … ‘I want to be here for you to learn what you need to learn, for you to see that not all male figures, especially in Chicago, are absent.’ The students here are not different from other kids in Chicago Public Schools. This is the state of our youth especially in the inner city. Some of them deal with so much. This is Chicago. It’s crazy.

How did the mock record label come about?

I really wanted to give the students a real-life and hands-on approach to the music industry. We had the classroom, the pre-production stuff, a recording studio—we pretty much had the beginnings of a label, and in one of the other classes, we had a T-shirt printing machine. I wanted them to learn by doing and by experiencing it. You know: the arguments, the laughs, the bad grades, the good grades, the good songs, the bad songs—everything.

I guess once they saw that the end product was to make a mixtape, they were like, ‘Oh, OK, so we are really going to do something. We are not just here in class to be in class. We are actually working toward something.’ That was something I wanted them to see. I felt the best way of learning was to do it. If I’m doing something, I will learn it better as opposed to just learning theory from a book. And kids learn that way, too.

We are teaching the business of the art here. The students have the art in their hearts. Whether writing or rapping or singing is their talent, I need to show them how to transform that talent into a business for themselves. They can be their own brand.