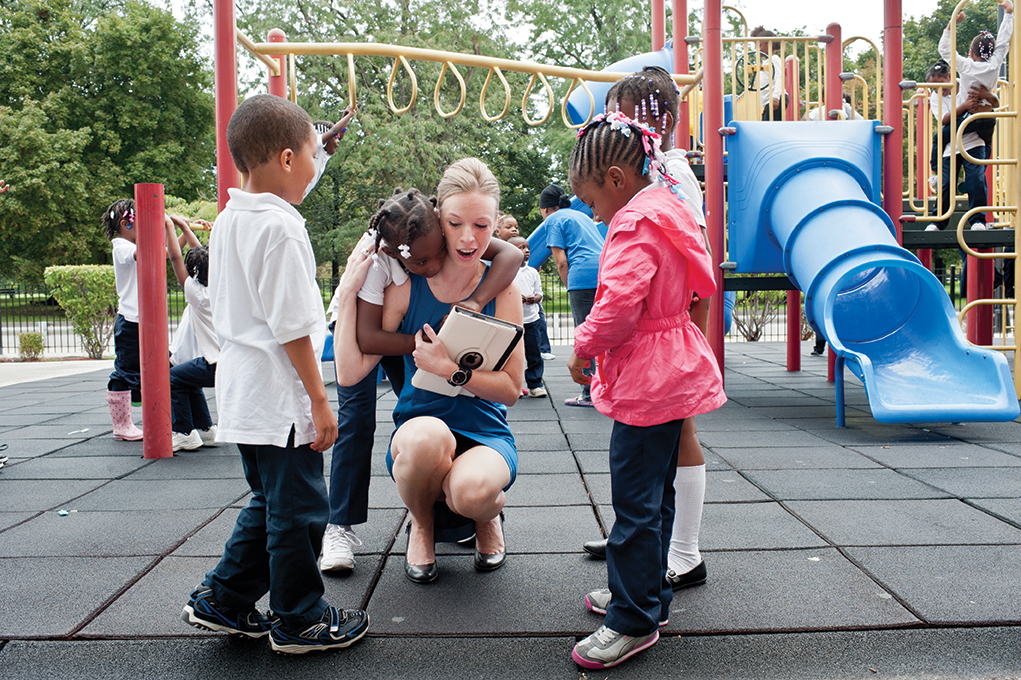 Burke Elementary Principal Jessica Biggs, a graduate of the Teach for America Principal Leadership Pipeline, checks in with kindergarten through 2nd-grade students during recess.

The SUPES Academy scandal puts an ugly blot on what historically has been a strong suit for the Chicago Public Schools: principal development. In Chicago’s long-running efforts to provide high-quality on-the-job training for principals, SUPES may prove to be the stumble that forces a course correction back to local expertise — SUPES had relied on superintendents from around the country to advise principals.

The 1995 law that put the mayor firmly in charge of the school system allowed the district to set higher standards than the state had for principal preparation. Three years later aspiring principals had a new way to meet the higher standards. It was the Leadership Academy and Urban Network for Chicago (LAUNCH), a joint program of CPS, the Golden Apple Foundation and the Chicago Principals and Administrators Association. Northwestern University provided coursework.

LAUNCH pioneered components of high-quality principal preparation that have withstood the test of time: selective admissions, a full-time internship and mentoring. Even with those elements, the program wasn’t perfect. “More in-depth training is needed,” said Northwestern professor Fred Hess, an expert on CPS who had taught LAUNCH courses.

By the late 2000’s, money and support for LAUNCH had run out.

What remained largely were local administrative certification programs that catered to teachers looking to raise their pay grade. The situation reflected national trends that were criticized in an influential 2005 report, “The Rise and Decline of School Leadership Programs,” which found program quality ranged from “inadequate to appalling.”

By 2010, the state was raising the bar for principal preparation, due in part to the advocacy and example of a tightly-focused program run by the University of Illinois at Chicago. At UIC, candidates complete a yearlong internship and receive two years of on-the-job coaching after graduation. Graduates of the program have strong track records of placement and retention at CPS schools.

The next year, Mayor Rahm Emanuel declared his support for principal development by creating the Chicago Leadership Collaborative, a loose affiliation of the district and four select preparation programs: UIC, New Leaders, a partnership between Teach for America and Harvard University, and Loyola University’s new program to help CPS assistant principals move up. Today the collaborative includes 10 local preparation programs.

Helping sitting principals grow their skills seemed a logical next step. But the SUPES program won instant critics, with many principals calling the training irrelevant and ignorant of  the need for principals to work with local school councils.

Then-CEO Barbara Byrd-Bennett quickly allowed them to opt out of the training by signing a waiver. This past April, as Byrd-Bennett headed toward a federal fraud indictment and guilty plea in connection with SUPES, the School Board suspended the program.

Though a recent Chicago Tribune article suggested that Mayor Emanuel now faces a “tricky situation” in trying to press for improved principal training, the push for solutions isn’t likely to go away.

Most recently, the district circled back to Northwestern, a partner in LAUNCH, for help developing executive leadership among Chicago’s best principals. Northwestern’s Kellogg School of Management and School of Education and Social Policy are providing training in the Chicago Principals Fellowship, a yearlong program for 20 outstanding principals.

The Chicago Public Education Fund, a bit player in the SUPES scandal, is providing $500,000 over three years for the fellowship program. And it is pushing to improve training for sitting principals.

In April it released survey results showing principals want to choose the topics they study, want to go deep on fewer topics and want to learn from examples of Chicago schools solving tough problems, like using the REACH teacher evaluation system effectively and transitioning to Common Core State Standards. In November the Fund will announce recommendations to reduce principal turnover.