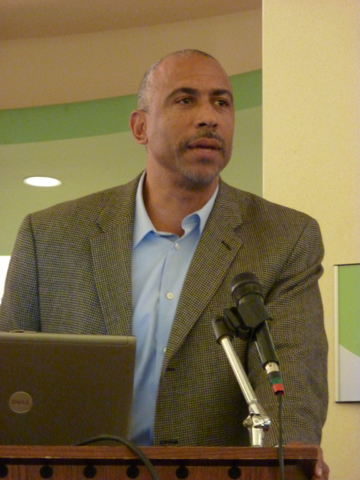 About 200 educators, policy makers and activists gathered yesterday at
National-Louis University to discuss the educational crisis facing
African-American boys and strategies to help them succeed in school.

About 200 educators, policy makers and activists gathered yesterday at National-Louis University to discuss the educational crisis facing African-American boys and strategies to help them succeed in school.

The symposium, co-sponsored by Catalyst Chicago, was sparked by findings of the May/June 2009 issue of Catalyst In Depth, “Reaching Black Boys.” The report found that African-American boys are more likely than any other group of students to be suspended and expelled, setting them on the path to dropping out.

Other sponsors of the event included MAGIC (Metropolitan Area Group for Igniting Civilization) of Woodlawn, National-Louis University, Urban Prep Academies for Young Men and the Golden Apple Foundation. The Lloyd A. Fry Foundation provided funding for the

“Today our goal is to move from a focus on the problems, to one on solutions,” said Catalyst Editor-in-Chief Lorraine Forte. “While schools often fail black boys, they also offer a ready-made opportunity for intervention.”

Keynote speaker Pedro Noguera, a New York University professor who is a national authority on minority males and the achievement gap, said no one knows exactly why the school system is failing young black and Latino men.[Listen to his full speech]

“The way we socialize boys might be implicated in this,” Noguera said. “The women’s movement was very clear that what we have to fight against is the narrowness of gender roles… (but) there has been no corresponding movement among men.”

Noguera also said the problem will not be easy to fix. “Let’s not pretend that if we create one more mentoring program, we’re going to solve this,” Noguera said.

A panel discussion followed Noguera’s speech. Panelists said incorporating rituals in schools and teaching students values might help. Others suggested more use of restorative justice discipline methods like peer juries and parent education. The panel included Rev. Otis Moss of Trinity United Church of Christ; Shelby Wyatt, a counselor at Kenwood Academy and a founder of The Brotherhood, a mentoring group; George Smith of 100 Black Men of Chicago; Erica Hunt, president of the Twenty-First Century Foundation, a national philanthropy that focuses its grant-making on black community development; Keilan Bonner, a math teacher at King College Prep; and Dennis Lacewell, principal of Urban Prep Academy in Englewood.

Moss said activists must get involved.

Three teenagers who are part of MAGIC’s Black Men and Boys initiative talked about what has helped them succeed and what needs to change in the school system.

“Some of them may not want to go to college… (but after dropping out) they can’t even get the job they want,” Mohn said.

At the event’s conclusion, Noguera emphasized that talking was not enough. “The next time you have a meeting, make it an organizing meeting,” he told the crowd.

Over the next year, several more events are in the works to discuss the issue and create an action plan.

“This symposium is one additional step along many thousand miles of steps,” said Rev. Calvin Morris, executive director of the Community Renewal Society (which publishes Catalyst Chicago). “Challenge us to do the kinds of things you wish us to do, and after that, come do it with us.”