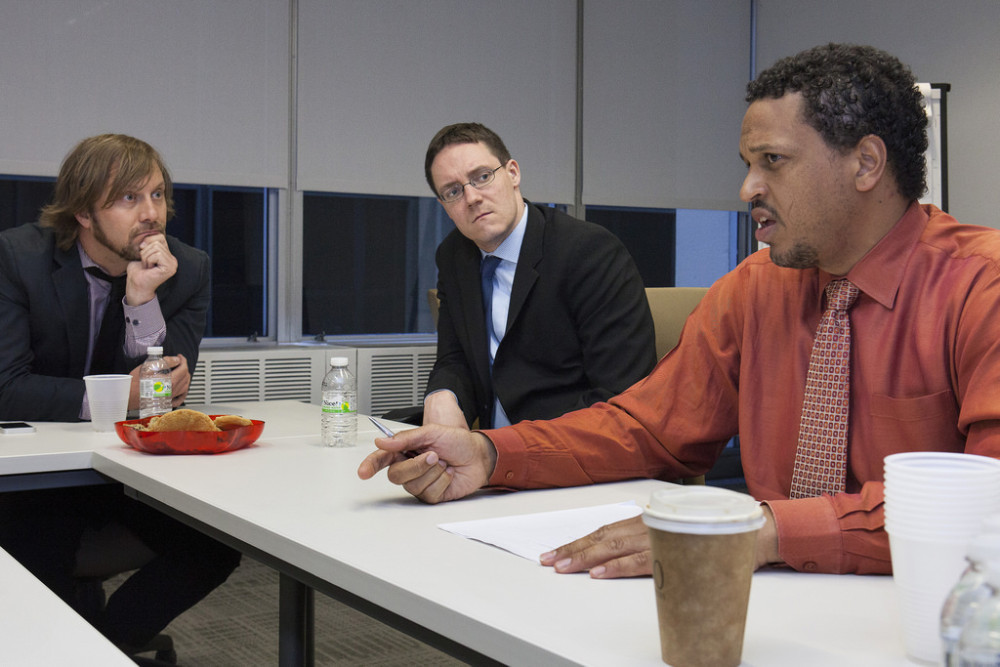 Principals Chad Adams of Sullivan High, Adam Parrott-Sheffer of Peterson Elementary, and Troy LaRaviere of Blaine Elementary talk about training and other matters in 2014. (Parrott-Sheffer is now a principal in Burr Ridge District 180.)

Last week, Catalyst Chicago held a roundtable discussion with a handful of CPS principals to gauge their thoughts on issues that the public usually doesn’t hear them talk about, but that have a significant impact on how well they can do their jobs as school leaders. Catalyst talked with four principals about new, state-mandated evaluations; managing budgets; principal training; and principals’ ability to speak their minds without fear of reprimand from the administration.

The idea for the conversation emerged after Blaine Elementary School’s principal, Troy LaRaviere, wrote about a top-down culture of suppression in CPS in a much-circulated op-ed in the Chicago Sun-Times. Other principals quickly followed suit, including Peterson Elementary School’s Adam Parrott-Sheffer, who wrote his own op-ed for Catalyst about how CPS turns good ideas into bad ones by not listening to those on the ground.

So we invited LaRaviere, Parrott-Sheffer and a dozen other principals to a panel discussion at our offices on June 5. Several expressed interest, but only four – including three vocal critics of CPS policy — participated: LaRaviere, Parrott-Sheffer, who both lead high-ranking schools in the North Side; Deidrus Brown from the soon-to-be turned around Gresham Elementary School on the South Side; and Chad Adams, a first-year principal at Sullivan High School, a North Side School on academic probation.

Unlike most CPS principals, all four of the participants were very familiar with the media spotlight. Brown has declared an all-out war against CPS for the action against her school, and Adams was featured in This American Life’s much-lauded Harper High School radio documentary.

Because of the length of the discussion – about 90 minutes – we divided the transcript into four parts and edited it for clarity. Today, we begin the series with a general conversation about the mood among principals and where they go from here. On Wednesday, we’ll continue with a discussion about principal training and the controversial program, SUPES Academy. Thursday’s discussion will focus on principal and teacher evaluations. We will wrap up on Friday with a conversation about budget matters.

Catalyst Chicago: How are principals feeling these days?

Deidrus Brown: There’s a lot of melancholy, because of the [hope] that principals would be somewhat autonomous in making decisions as to what’s best for their students, teachers, parents and community. And that is really not the case. You’re told to do something and you have to do it that way. I am not a puppet. I didn’t go to school and get four college degrees to be a puppet. I want to be valued, or at least be heard. I want to sit at the table and discuss what is best for the students and the staff. That’s where my frustration comes from. Decisions are being made by individuals who do not really know about the school.

Adam Parrott-Sheffer: I just laugh, and I remember when [former CEO] Jean-Claude [Brizard] first started and his big thing was this idea of “bounded autonomy.” We get a lot of the bounded. I’m not really sure I know what the pieces are that are autonomous. You go back to the first day of school and they were passing out checklists to district chiefs — $150,000-plus a year employees – who were supposed to go to schools to check on things like, ‘Are your bathrooms clean enough?’ It read more like the checklist for running a Hardee’s than it did for running a school.

Catalyst: What has been the reaction to the op-eds? Do you, as principals, feel like you now have permission to speak publicly, as CPS CEO Barbara Byrd-Bennett and Mayor Rahm Emanuel have both publicly said they welcome principals’ input?

Troy LaRaviere: Teachers and principals have told me that they were so grateful for that article, which has allowed for a conversation that would never have been possible in the environment that existed before it was released. Barbara Byrd-Bennett called me and asked if I’d had any negative experience with her office. And I told her this wasn’t about her. The things that are coming out of CPS aren’t coming out of her office. Frankly, they don’t even come from the mayor’s office. This is a national and international movement to privatize education and to create the excuse for it by destabilizing neighborhood schools, and our mayor is just one of many public officials across the nation who has bought into this effort.

Chad Adams: I guess I’ve never felt a fear to speak out, or maybe it’s just my personality. I say what I mean and I mean what I say. I have a little bit of a different perspective than these [colleagues]. I’m a new principal. I’m a first-year principal. So I only know what I know from what’s happened now. My question would be: what organization that is as big as CPS wouldn’t have some sort of parameters in place for talking to the press? Do you think Microsoft wouldn’t have some sort of protocols to follow? What about United Way?

LaRaviere: This is the City of Chicago, run by an elected official and his appointed Board of Education. [CPS is] a public institution that spends public tax dollars. The United Way does not spend public tax dollars. Microsoft does not spend public tax dollars. We do not elect Bill Gates. We elect Rahm Emanuel. He appoints Barbara Byrd-Bennett and as residents of the City of Chicago, we absolutely must hold them accountable, and any question to me that hints at some idea that we should not then begins to hint at the idea that we should stop calling ourselves a democracy.  Principals should go up to their 8th-grade classrooms, where they’re teaching the Constitution, and tell them that it’s not real. For clarity, if you say you’re speaking for the Board of Education or CPS, then of course you should check in. You can’t assume you’re speaking for CPS. I’m not speaking for the board. I’m speaking as a resident who knows what board policy is and who is a principal.

Parrott-Sheffer: We have local school councils, so technically I’m appointed by an LSC which is also an elected body. It’s more complicated than “what protocols are in place.” Those protocols need to reflect the fact that at some level I’m also appointed by an elected body and I report to the body in a public forum. And I think you lose credibility when you’re only able to engage in the positive news, the fluff pieces, the let’s-feel-good pieces. If we really want these schools to be good, and we really believe that, there are some difficult conversations we need to have as a city, and we need to have many voices that are a part of that.

Catalyst: What has been your relationship with the Chicago Principals & Administrators Association (CPAA)? Have they been a voice for you?

Brown: I’ve received no support from them [since the announcement of the turnaround]. No phone calls. I’ve been a paying member of CPAA ever since I was a principal, a decade, so I would have thought someone would reach out. I’ve gotten lots of support from the Chicago Teachers Union.

Catalyst: We’ve heard there’s talk about trying to change the CPAA. What’s in the works?

LaRaviere: There is an effort of principals organizing themselves behind the scenes. After the op-ed was published, a few principals stepped out and began an effort to meet and create an institution that would be a collective voice for principals. That work is ongoing, and that’s about all I can say about that at this point. The work is not being led by me. I have been recruited into it. Hopefully the public will hear from it soon, maybe a month or so.

But if we want to be effective at changing policies that affect our schools, we have to change legislation. We have to get out and talk to the public so they can talk to their legislators. The defunding of schools was a decision made at the mayoral level, the aldermanic level, the state level. We can’t have a conversation with Barbara Byrd-Bennett and affect the defunding of public education. As principals, we have to step out into the public sphere and have a public conversation.

Adams: The best way I can personally, as a leader, affect legislation is by making my public school a viable option. To show [people] that a neighborhood school can work at the high school level. There are not many of them that have succeeded. Public officials see charter schools and think that’s where it’s at. I know my alderman is pro-charter. But I’ve brought him in and said, ‘Look at what I’m doing.’ I think that’s affecting his mindset a little bit toward public education. So if I can do that and see that he can change his mindset, I can hopefully do that for the community members, for other legislators and senators.

I invite people into our schools. I want them to see that even if the school has had some downs, if you get a good leader in the school, a public education in a neighborhood school can be a flourishing place for kids to learn. But if you keep draining them of resources, it is going to be harder and harder. I feel like sometimes I barely have enough to survive.