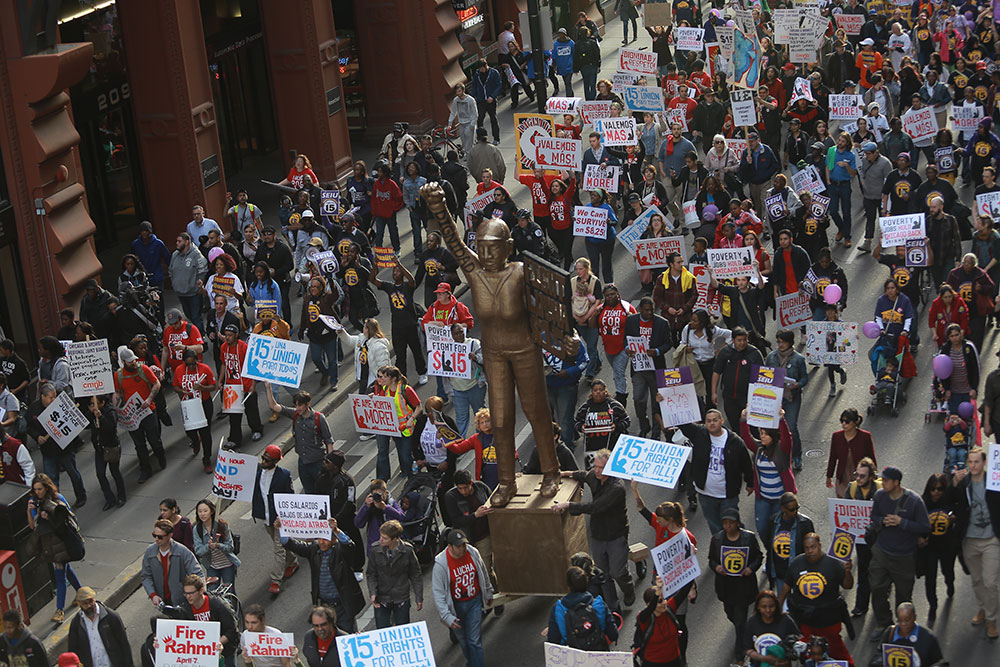 Over 1,000 people march down Jackson Boulevard during the Fight for 15 march in downtown Chicago on April 14, 2015.

Building on major victories in California and New York earlier this month, the Fight for 15 movement continues to surge. A walkout Thursday by low-wage workers in hundreds of cities across the country and around the world is being billed as the largest global strike ever.

In Chicago, fast food workers are being joined by warehouse workers, nursing home workers and adjunct college professors – all among the 42 percent of American workers who make less than $15 an hour.  The strike is timed to coincide with tax day, emphasizing the cost to taxpayers of public benefits that subsidize low-wage employers’ workforces.

Meanwhile, legislation that would raise wages for homecare workers, establish a domestic workers bill of rights and charge corporations to recover some of the cost of public benefits is being pushed in Springfield and Cook County.

Poverty wages paid by the fast food industry in Illinois mean that 51 percent of its workforce receives some kind of public assistance, costing the state $368 million a year, according to Fight for 15.  The total cost is much higher if you consider the 2.5 million Illinois workers who earn less than $15 an hour.

Raising pay levels to a living wage would mean that money could go to schools and other public services that are now critically underfunded, said Anthony Kemp, a local leader of Fight for 15.

Kemp said that after working for KFC for 12 years at locations outside Chicago, he now earns the state’s minimum of $8.25 an hour.  That makes it hard to afford basic necessities including clothing and transportation to work, he said.

But he said recent victories for the movement have shown that “if you stand up and if you are bold, you can win change.”  Early this month, both California and New York State enacted laws raising their minimum wage to $15 an hour over a period of years.

(Chicago’s minimum wage, currently $10, is set to rise to $13 by 2019; the Illinois minimum remains at $8.25, though two years ago 64 percent of the state’s voters passed a referendum calling for an increase.)

Throughout the day, rallies are taking place at McDonald’s restaurants on the North and South sides, as well as a temporary staffing agency that supplies McDonald’s warehouses and a nursing home where union members are asking for $15 an hour.

At Loyola University, fast food and nursing home workers are backing adjunct faculty members calling for recognition of their union.  One recent study found that nationally, 22 percent of part-time faculty live below the poverty level.

In Springfield, legislation that would raise pay rates for homecare and childcare workers to $15 an hour was scheduled to be considered by the House Human Services Committee this week.

Filipino, Latino and Polish domestic workers travelled to Springfield on Wednesday to press the state Senate to move on a Domestic Workers Bill of Rights, which the House passed last year.  The bill would extend the state’s minimum wage and other basic labor protections to housekeepers, nannies and homecare workers.

Domestic and agricultural workers were excluded from 1930s labor legislation in a deal with Southern segregationists in Congress, said Andrea Cristina Mercado, campaign director of the National Domestic Workers Alliance, which is coordinating with local workers centers and community groups to support the bill.  Subsequent waves of organizing won federal minimum wage protection in the 1970s, and just last year, federal overtime protection, she said.

The legislation “says these workers matter, their work is important, and we’re going to protect them the way we protect other workers,” Mercado said.  She said it’s important to stabilize and upgrade the profession as we face a “care boom,” with more people aging and requiring assistance in their homes.

Extension of the state minimum wage is important, said Magdalena Zylinska, a housecleaner who’s a board member at Arise Chicago, a worker organizing center.  But other protections are also important, she said; a housecleaner since 1997, she has experienced sexual harassment and wage theft, she said.

For live-in nannies and homecare workers, the law would guarantee one day off each week, she added.

“I don’t think the job will be done when the bill is passed,” Zylinska said.  “We will have to educate people about their rights and make sure it is enforced.”

On another front, community activists demonstrated at Wednesday’s Cook County Board meeting in support of an ordinance that would charge a fee to large companies paying low wages in order to cover the county’s costs of providing public services for their workers.

“In Cook County, the majority of workers paid poverty wages are people of color and women,” said retail worker Gianna Chacon in a statement. “Simply stated, it’s racist and sexist to allow big corporations to pad their profits by paying poverty wages.”

Chacon pointed out: “Companies like McDonald’s and Walmart make billions of dollars every year. These companies can afford to pay us enough to live on.”

It’s worth noting a recent labor-funded study that details McDonald’s efforts to structure its business to avoid paying taxes.  The study found that Illinois-based McDonald’s had used loopholes to evade $1.7 billion in U.S. taxes over the past decade.  That’s certain to reflect millions of dollars in state taxes evaded, while taxpayers subsidize the company’s low wages.

Over the past three decades income inequality has grown steadily while our public sector has been starved of revenue, and these two phenomena are related.  But the tide may be beginning to turn – and if it does, it will be because of people organizing in their communities and workplaces.