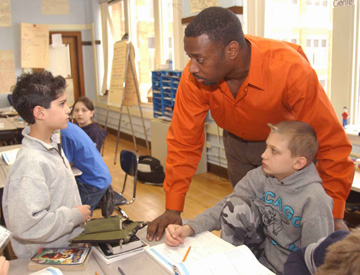 As a resident at The Chicago Academy, Andre Cowling, 38, has embarked on his third career. He spent six years as an Army captain in the medical service/ordnance corps and served in Kuwait during the first Gulf War. After leaving the service, he worked for eight years in production management at M&M/Mars. He was earning a six-figure salary, but felt unfulfilled.

“Me and my pockets got fat, but my psyche did not,” he says.

Teaching had been in the back of Cowling’s mind for a long time, yet he resisted the idea, thinking the preparation would be too much hassle. “There are a lot of barriers in place to teaching,” he says. “You have to leave your job [and] pass all these tests.”

Then he saw an ad in the newspaper for the Academy for Urban School Leadership’s teacher-training program for career changers at The Chicago Academy. Though he read it with interest, he left the ad in his car and forgot about it.

Weeks later, Cowling rediscovered the ad when he used the page to clean his windshield. “This must be fate,” he thought. “Somebody must be telling me to do this.”

So he went with his intuition and visited the school. “Once I came into the school, my mind was made up completely,” he says, citing the school’s clean, safe atmosphere and the respect shown by teachers and students.

So far, Cowling’s third career has engaged his intellect. A poor student in high school and college, he saw his interest in academics soar when it was coupled with the practical experience the nine-month residency provides.

“We are taking theory directly into our classrooms,” he says. “We don’t have to wait a few weeks or months. If something doesn’t work the first time, we get to try it again.”

For example, Cowling has learned a lot about teaching reading from tutoring a 5th-grade boy who spoke Spanish, but had not learned English well and who had been retained in 3rd grade at another school. For a required assignment, Cowling conducted a case study, an advanced instructional method used by teachers seeking National Board Certification, to develop an academic program tailored to the boy’s needs. He also tutored the boy at the boy’s home, and made use of some special education techniques for teaching reading.

The intensive program worked. The boy’s reading level jumped two grades and by March, he was reading within a few months’ reach of the grade level. “He’s a good kid,” Cowling says. “You can’t get a book out of his hands now.”

Though his energetic 5th-graders are kept in check by his six-foot-plus frame and often-serious demeanor, Cowling enjoys playing instructional games with them. “Most teachers hold back, they let kids win,” Nicholson says. “Not Andre. He gets excited when he plays against the kids. That makes them feel like beating him was a real challenge. It motivates them to try harder.”

Cowling draws on his military background to aid instruction. In April, he led a discussion with his students on peacekeeping and the role of the United Nations. “It’s become a topic of discussion with the kids, especially now,” he says, referring to the war in Iraq. “I’m kind of an expert on losses in war. I lost my best friend over there.”

Christian Crocker, one of Cowling’s students, is fascinated with the military and even dresses daily in fatigues. He says Cowling is a role model. “He gives me good hints about the military and stuff,” Christian says. “I never had a teacher like him. He’s been in a war. I think he can pretty much do anything.”

One day Christian asks Cowling when he will leave the Academy. “June 30,” Cowling says matter-of-factly. “When you go, I go.” Then his voice softens. “I know you don’t want me to leave.”

Before school ends, Cowling will give his class a glimpse of his former corporate life when they tour the M&M/Mars plant where he used to work. He’ll combine the field trip with a little math instruction.

“They’ll get to make a Mars bar [and] a Snickers bar. I’ll teach a lesson while we’re there on fractions, percents, ratios.”

As Cowling had hoped, working with other teachers has rewarded his psyche. “I came out of business, so I know how to collaborate with people,” he says. “But we’re collaborating about what’s best for kids. We trade ideas so much. That’s the best thing about this program.”