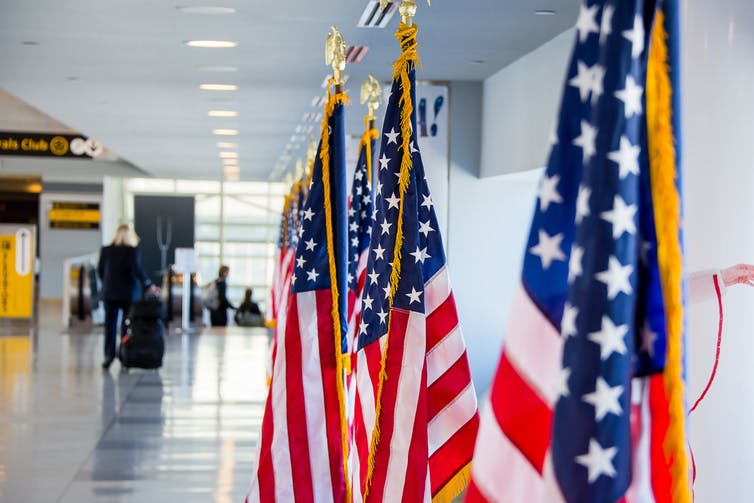 Over the past two decades, how many people have been killed in the U.S. by extremists from the six countries on the Trump administration’s new travel ban list?

The answer is zero, according to data I have collected from Department of Justice records and other sources. Immigrants from these countries constitute less than 1% of terrorism cases in the United States, and none of the cases in the last two years.

The same is true for the original travel bans imposed in 2017. There were, and still are, zero fatalities in the United States caused by extremists from the countries on those lists, too.

One attempted attack in decades

Under the new ban, which begins on Feb. 22, citizens of Eritrea, Kyrgyzstan, Myanmar, Nigeria, Sudan and Tanzania will no longer be able to apply for immigrant visas.

The White House says these countries “must satisfy basic security conditions outlined by America’s law-enforcement and intelligence professionals” in order for the ban to be lifted.

However, there is no evidence that immigrants from these six countries pose a national security threat to the United States.

In fact, only one citizen from any of these countries has attempted a terrorist attack in the United States: 11 years ago, a man from Nigeria tried but failed to ignite explosives in his underwear as his flight approached Detroit. Nobody was injured, apart from the would-be bomber.

In recent years, Nigeria has “actively cooperated with the United States and other international partners” to prevent further attacks, according to a State Department report last October.

The new ban wouldn’t have stopped the underwear bomber, in any case, because he was traveling on a tourist visa, and the new ban applies only to immigrant visas.

Donald Trump’s presidential campaign and many of his administration’s policies have played on the trope of threats posed by refugees, asylum seekers and other migrants.

However, the administration’s own security agencies view homegrown and domestic terrorism as a greater threat than extremist violence by foreigners.

“We now assess the most predominant terrorist threat to the Homeland to emanate from U.S.-based lone actors,” the acting director of the National Counterterrorism Center testified to Congress in November.

For more than a decade, under three administrations, the FBI’s annual briefing on worldwide terrorist threats has rated American extremism as a greater concern than foreign operatives. The director of the FBI repeated this point in congressional testimony several days after the new travel ban was announced.

The travel ban would not have prevented the country’s deadliest terrorist attacks in recent years, which were committed by right-wing Americans, not immigrants: the anti-immigrant extremist who killed 22 shoppers at a store in El Paso; the white supremacist who killed 17 students and teachers at a school in Parkland, Florida; or the anti-Semite who killed 11 worshipers at a synagogue in Pittsburgh.

The travel ban also would not have prevented the most recent attack by a foreign national – the Saudi officer who killed three sailors at a naval air base in Pensacola. The officer did not arrive on an immigrant visa, and the ban specifically exempts Saudi Arabia.

National security has a special status in government policy – policymakers are given extra leeway on security issues in order to safeguard against existential threats.

A generation ago, during the Cold War, those threats involved nuclear missiles and million-man armies. After 9/11, the primary threat was mass casualty attacks by nongovernmental organizations. Today, fortunately, those threats have diminished to the point that the latest National Security Strategy of the United States focuses on lone individuals with small arms, homemade explosives, vehicles and knives.

This violence is a concern, but not a leading threat to public safety. Terrorists were responsible for only one-fifth of 1% of the 290,000 murders in the United States since 9/11, according to data from the Global Terrorism Database and the FBI’s Uniform Crime Reports. The government’s counterterrorism dragnet, involving thousands of agents over many years, has discovered fewer and fewer plots in recent years.

Still, many Americans do not feel safe. Half of the respondents in recent surveys say they worry about being the victim of a terrorist attack.

Trump’s new travel ban asks Americans to believe that they will be more secure without immigration from Nigeria and five other countries. In my view, that is an insult both to those countries and to the country that calls itself the home of the brave.

Charles Kurzman is a professor of sociology and co-director of the Center for Middle East and Islamic Studies at the University of North Carolina at Chapel Hill.