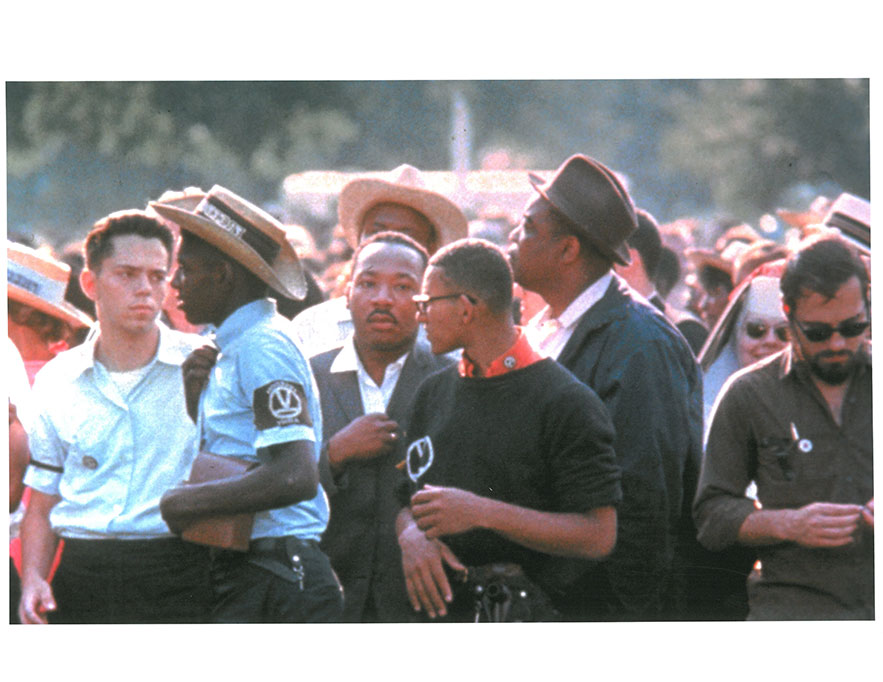 Martin Luther King Jr. photographed at Marquette Park in 1966 by Bernard Kleina. Kleina is the only person known to have taken color photographs of King during his historic marches through Chicago. His photographs are now part of the collections of the Smithsonian Institution’s National Museum of African American History and Culture.

(Editor’s note: This year marks the 50th anniversary of the Chicago Freedom Movement, an open housing and racial justice campaign that brought the Southern civil rights movement to Chicago, where the Rev. Martin Luther King Jr. lived for a time in a tenement in North Lawndale. Through the eyes of scholars and participants, “The Chicago Freedom Movement: Martin Luther King Jr. and Civil Rights Activism in the North” explores a historic campaign that some people have dismissed as a political failure, and argues that the efforts had a lasting impact in the city and the nation. Here is an excerpt from the introduction of the book, which will be published in April. )

In September 1965 a dozen or so members of Dr. Martin Luther King Jr.’s southern field staff moved into the West Side Christian Parish’s Project House in the heart of Chicago’s Near West Side, joining other volunteers already living there. Black and white, male and female, most of them still in their early twenties, they had already been tested by civil rights struggles in the South. It was just weeks after passage of the Voting Rights Act and six months after Selma—where civil rights demonstrators had overcome brutal beatings to cross the Edmund Pettus Bridge and march to Montgomery, Alabama, in the struggle to obtain voting rights in the South. They came to Chicago to work for James Bevel, himself fresh from Selma, where he had been director of direct action for King. Bevel was serving as the parish’s program director, and he would soon be appointed director of the Chicago Project of the Southern Christian Leadership Conference (SCLC) as well, an “elder” at the age of twenty-eight.

Among these SCLC staffers were James Orange, age twenty-two, who had joined the movement in Birmingham and helped the Selma-to-Montgomery marchers persevere in the rain with his inspired song-leading; eighteen-year-old Dorothy Wright (later known as Dorothy Tillman), who had joined the SCLC staff after organizing a student walkout at her Montgomery, Alabama, high school on the day the Selma march arrived; and Lynn Adler, twenty-two, a recent University of Pennsylvania graduate who had spent the summer in Hale County, Alabama, working for SCLC’s Summer Community Organization and Political Education project (SCOPE).

Some were Chicagoans who had headed south and were returning to their home territory: Claudia King had been active with the Chicago chapter of the Congress of Racial Equality (CORE); Jimmy Wilson, a former gang leader from Chicago’s Lawndale community, had been helping the West Side Christian Parish organize youth before going south. Suzi Hill and Jimmy Collier were Chicago students who had been drawn south by the excitement of the campaign in Selma; Jimmy would soon be writing new freedom songs for the Chicago movement.

Others came from afar: Charlie Love from San Francisco, Eric Kindberg and Anne Gillie from elsewhere in the Midwest. Many came dressed in blue work shirts and overalls, the signature uniform for southern civil rights workers organizing rural farmers, ready to meet Chicago head-on. Twenty-five-year-old Bernard LaFayette Jr., a veteran of the Nashville movement and the Freedom Rides and a former college roommate and compatriot of James Bevel’s, was already established on Chicago’s West Side, on the staff of the American Friends Service Committee (AFSC). LaFayette had arrived a year earlier, invited by AFSC to develop a nonviolent approach to the West Side’s problems.

The Project House where these new arrivals settled was just half a block from the famed Maxwell Street Sunday market, an old immigrant community bustling with peddlers, shopkeepers, and families selling wares from the backs of trucks. Even more popular were Chicago’s Polish sausages sold at a vending stand on the corner. And there was music everywhere; in fact, many a Chicago blues musician first found an audience at the Sunday market. Residents of the Project House were awakened at 6:30 on Sunday morning by the vibrant sounds of tambourine and gospel music wafting in the windows from a market street band just outside.

They had indeed arrived in Chicago.

The new arrivals soon moved from the Maxwell Street neighborhood to shared apartments in East Garfield Park, farther out on the West Side and closer to the Warren Avenue Congregational Church, which would be their headquarters. There, they discovered Edna’s, a tiny, newly opened soul-food restaurant on Madison Street, just a block away. Edna’s one-dollar fried chicken dinners—served by Edna and cooked by her father—became a mainstay. As the staff became better acquainted with Edna, she and her father often served them free dinners when paychecks were late or money was short.

The staff’s arrival in Chicago was the first concrete step in Dr. King’s move to join forces with that city’s civil rights movement in what would soon become the Chicago Freedom Movement (CFM), a coalition of King’s SCLC and the Chicago-based Coordinating Council of Community Organizations (CCCO). And so it began. Meetings took place and an official organizational structure emerged as autumn unfolded and relationships between SCLC and CCCO were formalized. By the time their collaboration went public, the staff’s work was well under way. The movement that grew out of this collaborative effort soon declared its intention to end the slums in Chicago. ..

Next Monday: The Fight for Fair Lending.