On a day early in the school year, Mays Elementary School kindergarten teacher Arnitra Campbell is having a rough day, wrestling with a roomful of antsy students. One spits on the table, getting a rise out of his classmates. Other children can’t seem to stop talking, even turning their backs on Campbell to socialize with friends.

“The noise level should be zero,” she says. “What does that mean?”

“Be quiet,” some students say.

“Ms. Campbell doesn’t say ‘Be quiet, no talking,’” she responds. “Rule number 6 says, ‘We will not talk when our teacher is talking.’”

Even more than academics, kindergarten is about learning the right behavior in school. For some teachers, teaching correct behavior means a heavy emphasis on strict discipline.

But the focus in the education world has shifted toward an approach similar to Campbell’s. Instead of admonishment and punishment, the emphasis is increasingly on strategies to prevent students from acting out in the first place. These strategies include teaching social and emotional skills that help children manage their emotions, make good decisions and calm themselves when they are upset.

Illinois is the only state that has comprehensive K-12 social-emotional learning standards, and experts say that it is best if students begin learning these skills early on.

In Chicago, several pilot programs have gotten off the ground. But full-scale implementation of social-emotional learning has been uneven.

For urban teachers, it can be especially hard to make the transition away from punitive responses to unruly behavior, says Patty Horsch, a program manager at the Collaborative for Academic, Social and Emotional Learning, known as CASEL. A Chicago-based national non-profit, the organization promotes the teaching of social and emotional skills in school to boost academic success.

Big-city schools sometimes have “a tendency to be more authoritarian about behavior,” Horsch says. “Teachers are in a very hard place. There’s such pressure to raise test scores and they have little help.”

An example that Horsch explains is counterproductive is a classroom behavior chart. Students have their names placed on cards, moving from green to yellow to red depending on how badly they behave. Horsch says the strategy is too public, embarrassing children rather than teaching them.

“I remember seeing a 3rd-grade teacher who never, at the end of the day, moved two little boys off of red because she knew they’d be [back] there by the beginning of the next day,” she says. “What does that say to a kid?”

Kindergarten is a good place to start learning self-discipline, self-awareness and how to understand others’ perspectives, Horsch says.

At Belding, kindergarten teacher Leon Schrauben illustrates this notion. He understands that a highly regimented classroom is not always the best environment for active young children.

Teaching his students how to work and function in a group is more important, he says.

“They’re getting the idea that the world around them isn’t designed just for their needs. ‘It’s not necessarily about me, it’s about the group right now,’” Schrauben says.

One day, as other students work on a lesson, one boy makes robot-like sounds and whirls around before landing on his knees on the carpet. He does this two more times, running back and forth between the rug and his seat. Schrauben doesn’t yell at the boy or punish him. Instead, he lets him run off steam and keeps the other students on task by telling them to get to work.

But patience can be a tall order for anyone to maintain, especially an adult surrounded by more than two dozen 5-year-olds.

Campbell occasionally loses her cool, warning one boy that she’ll talk to his mother and telling a girl to close her mouth.

But even though the going is tough, she comes back to the social-emotional strategies she learned as a student teacher and from her peers. These strategies include coaching students who are fighting, instructing them to tell each other what they don’t like about a situation and working with them to understand their feelings.

On this day early in the year, Campbell sits the children down to read a poem about feelings.

She reads the poem out loud to them, then has a student read it.

Then she asks: “How do you think I feel right now?”

“Mad and…” she prompts. The students guess “happy.”

“I’m not happy right now,” she says. “This makes me feel like the first day of school. I know we can get through this way better.”

Another practice that aims to teach social-emotional skills is a meeting at the end of each school day. Usually, it is a time for students to share “appreciations,” things others did that made them happy.

Today, Campbell uses the time to bring up the behavior issues again.

“No appreciations, because I need to talk,” she says. “Who can tell me what they think I’m talking about now?”

“Now listen,” Campbell continues. “The morning, before you went to lunch, was fine. The afternoon, after you came back from recess, was terrible. It embarrasses me when I have to talk or yell at you. Not only was I embarrassed, I was angry.”

Campbell says that talking with students about feelings is a good way to teach them character while expanding their vocabulary. When students came in, she says, they only really used the words “happy” and “sad.” Now, they understand a much broader variety of emotions.

“If I forget to do it, at the end of the day, they will remind me to do appreciations,” she says. “They really took to that… ‘He held the door for me, he shared his crayons with me, he played outside with me, he helped me with my math.’” 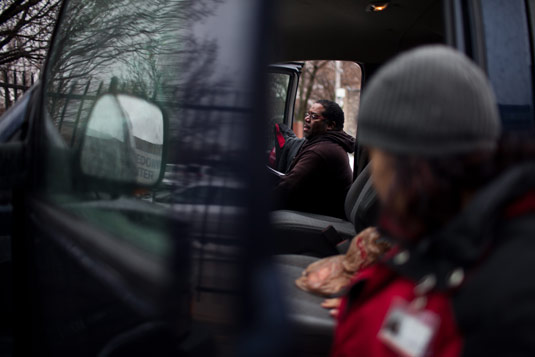 Two case workers prepare to depart in the chaser van, which follows the mobile feeding truck throughout the city. The van is used to shuttle homeless people back to The Salvation Army Harbor ‪Light center if they would like to receive treatment. Photo by Jonathan Gibby 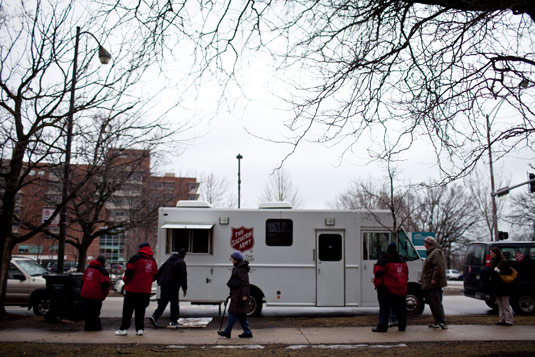 The Mobile Outreach Unit makes a stop at Wilson Avenue and Marine Drive in Uptown. “Sometimes God uses what started out as wrong or bad and turns it into good, and that’s certainty what we have seen here. We have seen the attention brought to the needs of the homeless,” said Salvation Army Captain Nancy Powers in regards to a recent controversy with 46th Ward Alderman James Cappleman. Photo by Jonathan Gibby 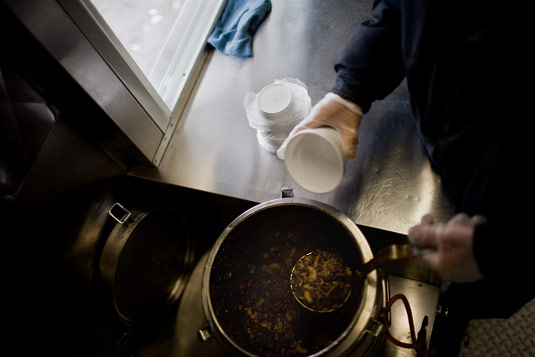 A server prepares some food for a customer during a stop at Wilson Avenue and Marine Drive in Uptown. Photo by Jonathan Gibby