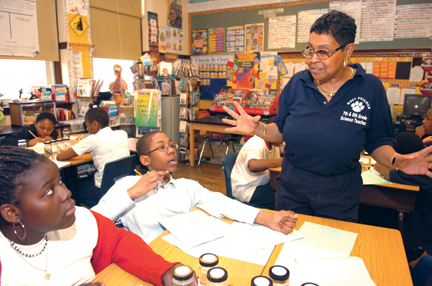 Teachers at West Pullman Elementary know that just because students leave the school one week doesn’t mean they won’t be back the next.

“I had one student who transferred [out] toward the beginning of January, and she was back last week,” says 6th-grade teacher Erica Fox in early February. “They’re in, and then they’re out.”

Mobility is high throughout the West Pullman neighborhood, particularly at West Pullman Elementary, where 26 percent of students enrolled at the start of school left before year’s end—the highest percentage in the district, according to 2006 data from the Consortium on Chicago School Research. Another 22 percent of students transferred in mid-year. Citywide, those figures are 10 percent and 9 percent, respectively.

For the most part, students come and go from nearby schools. “You just have a lot of kids moving right in this little circle,” says Rosalyn Faulkner, a counselor who oversees enrollment. Many students transfer to and from Metcalfe, Higgins and Songhai—all in the West Pullman community—and from Haley, in neighboring Roseland.

Area 18 Instructional Officer Thomas Avery acknowledges that mobility is a significant community-wide problem. At West Pullman Elementary, the principal and teachers are working to make academic progress— “they’ve got good leadership, and the staff seems to be very committed,” Avery says—but the school faces a difficult task given the conditions in the area, such as boarded-up housing and high crime.

Principal Darlene Reynolds says mobility goes up when families face tough economic times. “If you don’t have a job and you can’t pay the rent, then of course you lose your home. In this particular area at this time, there’s a lot of that going on,” she says. Some students move in with relatives when parents become incarcerated or have substance abuse problems, she adds.

Reynolds invites parents and guardians—especially those new to the school—to visit any time and to volunteer.

She also encourages teachers to share strategies for helping newcomers adjust, which is especially critical for students in 5th grade and up. These students tend to have the hardest time adjusting to a new school because they feel the need to prove themselves to classmates, she says.

“A lot of them are not coming in behind, but they get behind when they’re not concentrating on academics,” Reynolds says.

Veteran 7th-grade science teacher Deborah Lewis helps mid-year newcomers adapt with a special routine. All her homeroom students introduce themselves individually and then talk for a few days about “one thing good and one thing new” that happened recently. “I try to show them that change is okay,” she says.

Lewis also provides a welcome pack of notebooks, pens and other supplies and watches out for special needs that may not be taken care of at home.

Fox talks to new students informally for the first few days to gauge whether they are on track academically. If a student is behind or has trouble with lessons, Fox spends time explaining the material one-on-one or pairs the student up with a classmate for peer tutoring. “Since they came during the middle of the year, it’s generally too late to sign up for the after-school program,” she says.