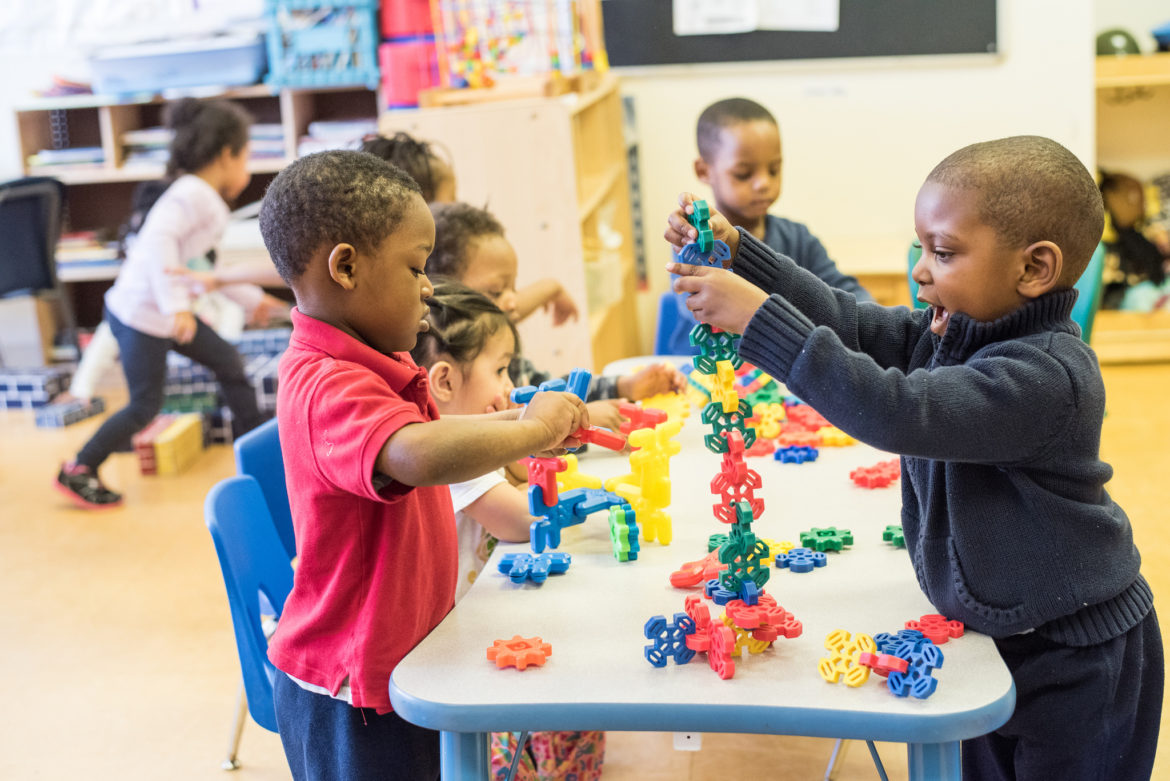 Channing's Childcare in Austin and its owner, Ruth Kimble, are part of a state initiative to increase the number of high-needs children in early learning programs.

In Austin on the city’s West Side, early childhood advocates are going to extra lengths to find children who could benefit from preschool: By targeting parks and laundromats, they hope to recruit families who otherwise wouldn’t know about, or take advantage of, early learning programs.

Once families have been recruited, someone helps them figure out which early learning programs have space for their children, as well as offers referrals to programs to help with transportation, housing, health care and other needs that are common in this impoverished neighborhood.

“Parents want to be involved, want to be engaged. They care deeply about their children’s education, but if you’re struggling to find a place to live, and food to eat every day and transportation, then that takes first priority,” says Amy Voege of Austin Coming Together, a network of 65 social service agencies.

Austin and 10 other communities around the state are part of the federally funded Innovation Zones initiative, which launched in fall of 2013 with part of a $52 million Race to the Top Early Learning Challenge grant. The 11 communities include five in Chicago and were chosen to participate based on their level of need and history of collaboration. Other states that won Race to the Top grants — from Pennsylvania to North Carolina to New Mexico — are using the Innovation Zone approach to try new strategies aimed at getting more children who could benefit from early learning into programs that have space.

Illinois has spent just under $5.7 million on its 11 zones, targeting children from key demographic sectors, such as children who are homeless, from lower-income families, have special needs or are learning English as their second language. The zones also aim to screen more children for early intervention services and improve the quality of early learning, as measured by the state’s three-year old rating system.

The goal is to find effective strategies that can be scaled up and used statewide.

Data are still being collected and analyzed for a final report after the program ends in December, but officials say the zones have been “bright spots” in the state’s early learning work.

Illinois Action for Children’s Leah Pouw, who oversees all the Innovation Zones, says the state targeted regions that tried strategies in the past without seeing change. This time, advocates got six months to plan using data for their community to develop smaller-scale experiments that could be tweaked as needed.

“They’re right at the ground level and they can adapt really quickly, so if something doesn’t work they can change their plans,” Pouw says.

So far, the Innovation Zones have “been an incredibly rich source of information” for the state, says Kathy Stohr, deputy director of the Governor’s Office of Early Childhood Development.

Two of the strategies tested in Innovation Zones will likely be expanded, including improvements to the intake and referral process and boosting parent’s participation. Several zones improved their referral systems by hiring a worker to oversee the coordination, improve forms and link up with agencies and organizations that hadn’t been tapped before.

West suburban Aurora’s zone, for instance, worked with a refugee resettlement agency, a food pantry and a homeless shelter; a teen mother’s program and a health clinic are next in line. Although the idea seems simple, “a lot of communities jumped on it because not a lot were doing it,” says Trish Rooney, who oversees the Aurora zone.

In the Altgeld Gardens-Riverdale area on the city’s Far South Side, preschool enrollment was already high because agencies worked closely with public housing residents, who make up a large portion of the population.

But some of the most vulnerable children were slipping through the cracks; for example, children who were living with relatives and weren’t on a lease and had not been reported to agency caseworkers.

Angela Bailey, senior education associate at Business and Professional People for the Public Interest, is overseeing the Altgeld-Riverdale zone and says she worked with staff at the public library, a health clinic, an after-school program and a property manager’s office to help them spot families with children who could be in preschool.

“We knew we needed to reach people in ways that were not directly connected to school or the general social support network in the community,” Bailey says. “If we hadn’t looked at the data, I think we would have tried a different strategy or said we don’t have a problem.”

To better involve parents, some zones trained parents as “ambassadors” to go out into the community and talk with families about enrolling their children. One example is suburban Cicero, where 15 bilingual parents earn stipends to attend community events and knock on doors in areas targeted by using Census data. If preschools are not located nearby, the ambassadors can refer parents to one of five “pop-up” preschools that offer once-a-week lessons with a teacher.

But the ambassador approach is not without its challenges. In a memo to the governor’s office last year, Pouw noted that several zones had difficulties with recruiting and providing ongoing support to parents.

Lessons from the 11 communities were used to help draft Illinois’ successful application for a federal preschool expansion grant.

Several managers say a huge benefit of the Innovation Zones was the ability to try out new ideas without fear of losing their funding. Usually, advocates are told they can’t adopt a strategy “because it’s not in the contract, it’s not standard practice,” says Janice Moenster, who oversees the Greater East St. Louis zone.

But with funding due to run out in December, several communities have turned to foundations or private funders to continue their initiatives. Meanwhile, the state is still deciding what it can spend moving forward — and that decision won’t be an easy one, given the state budget impasse that has hit social services particularly hard. Changes in the requirements for state-funded daycare subsidies have also made the work more difficult.

Some daycare providers are now hesitant to take in children who may qualify for state subsidies because the certification process is taking longer than before, says Ruth Kimble, a daycare provider who’s helping the Austin Innovation Zone.

Gov. Bruce Rauner and the Illinois State Board of Education have proposed increasing the early childhood block grant by $75 million for the coming school year. But as Voege of Austin Coming Together puts it, it will be tough to make progress with early learning when there’s a “breakdown of the safety network.”