On an afternoon in late January, “Maxine” sits at a table at a neighborhood youth center with a thick roll of clear tape, methodically cutting pieces and trying to piece back together a book that she got from school, “Arthur Accused,” that is falling apart.

Ever so often she glances out the window and taps her foot. She’s waiting for her mentor, Ewa, to arrive.

“Sometimes, when she says she can’t come and get me, I am mad for hours,” Maxine says.

Like most mentors, Ewa takes Maxine out to movies, helps with homework or simply hangs out. But the program that brought them together is not typical: All the children have a mom or dad who is in prison.

Mentoring Children of Prisoners is a federally funded initiative that has two sites in Chicago, both on the city’s South Side. Since 2003, the federal government has awarded about $158 million to nonprofit organizations to run these mentoring programs.

A study conducted by Public/Private Ventures, a national group that evaluates social policies and programs, found that when they have mentors, children with incarcerated parents do better in school and are less likely to use drugs or get violent.

Some advocates, however, worry that volunteer mentors may be inconsistent or, worse, may drop out after a short run. “They can do more harm than good,” says Gail T. Smith, executive director of Chicago Legal Advocacy for Incarcerated Mothers.

Also, others wonder whether isolated mentoring efforts provide enough support to children of prisoners, who often need professionals to help them deal with the trauma of being away from their parent for an extended period of time, says Twin Green, who runs a social service agency in Markham and chairs the program committee of the Illinois Taskforce for Children of Prisoners, Children of Promise.

Some of the advocates’ skepticism stems from the unlikely support of President George W. Bush who, in state-of-the-union addresses, called on the nation to help 1.5 million children with parents in prison. They blame get-tough sentencing laws—something Bush strongly supports—for unnecessarily separating children from their parents by locking up thousands of non-violent drug offenders.

“Wouldn’t money earmarked for mentoring be better spent on drug rehab so parents can stay with their children?” they ask.

‘Our children could benefit’

In a Catalyst Chicago survey, school social workers cited mentoring most often as the service needed for children with incarcerated parents. Yet only one social worker knew about the federally funded program.

Passages Alternative Living Programs routinely visits schools and churches to recruit children and mentors for their program. So far, they only have about 70 matches toward meeting a goal of serving 250 children.

When Paderewski Elementary Principal Jo Anne Roberts heard about Passages’ mentoring program, she immediately told teachers at a staff meeting. A positive adult role model can help students with parents in prison see other options, she recalls telling them.

“They take children outside of their environment and encourage them to do well in school,” she says. “Our children could really benefit from that.” Paderewski is in South Lawndale, a high-crime, high-poverty neighborhood on the West Side.

Passages has had a tough time finding children because schools and churches don’t automatically know which students have parents in prison, and families often want to keep it that way, says Olivia Grady, who oversees the mentoring effort. Even referrals from inmates at Dwight Correctional Center, a women’s prison in downstate Illinois, don’t always work out.

“Sometimes there’s a conflict between the prisoner and the caregiver,” Grady says. “There’s also a stigma and they don’t want their name out.”

At Chicago Youth Centers’ Elliott Donnelley Youth Center, where Maxine and Ewa meet, there is a waiting list of children who want to be paired with a mentor. The need is especially great for male mentors, says Cheryl Howard, who runs the mentoring program.

Most volunteer mentors are women, but Howard prefers not to match them with boys. “They are in search of men to be role models,” she says. “They usually have enough women in their lives.”

Last summer, Howard persuaded William Glover to get involved. A suburban father, Glover’s day job is working with young men who are awaiting trial or sentencing at the Juvenile Detention Center.

Glover says he signed up so he could help boys before they have a record. His mentee, a 15-year-old named “Seth” whose father is in prison, is showing signs that he could be headed in the wrong direction, pinning all of his hopes for the future on becoming a basketball star. “He has the Michael Jordan syndrome,” Glover says.

Seth lives in the Harold Ickes housing project. Glover says when he goes to pick him up, he sees Seth taking in what’s going on. “I don’t know what goes on inside, but outside it is like a dead zone—drug dealers lingering, crack heads walking around,” he says.

Every Sunday over breakfast at McDonalds, Glover tells Seth that, even if he does go to the NBA, he could still use a college education. Glover also shows up at Seth’s school and checks in with teachers. “That is the one time Seth is not glad to see me,” Glover says.

Seth is doing OK in school, notes Glover, but he is bright and could do much better. (Seth’s mother, who is single and works to support her four children, rarely has time to go to the school, Glover adds.)

Lending a hand to caregivers

It’s common for caregivers to be stressed out, says Howard, who created a brochure to help those who are struggling financially. “Moms and grandmas are just trying to get through the day-to-day living,” Howard explains.

Mentors can take some of the pressure off. And “it is nice for a man to be there, especially because Seth’s mother is so young herself,” Glover says.

Seth has mentioned his father only once, Glover recalls. More often, he talks about an uncle he admired who was killed in a car accident.

Even girls whose mothers are at home while their fathers are in prison can use positive role models. Maxine readily asserts that she plans to follow Ewa’s footsteps and become a lawyer.

Maxine, who has a round face and wears her hair in thin braids, gives a “thumbs up” when asked how she’s doing in school, but reveals that her mom doesn’t usually have time to help with homework. She is repeating 3rd grade.

Her father is in a medium-security prison in Danville, more than two hours away. Maxine says she has talked to him and visited in the past, but hasn’t had contact with him in months because her family has no phone or car.

At the moment though, she seems less disturbed by this than she is by whether the street lights have come on—signaling the nearing of 5:30 p.m.

Right on time, Ewa walks in.

For information about mentoring at Passages Alternative Living Program, call Olivia Grady at (312) 225-3800. 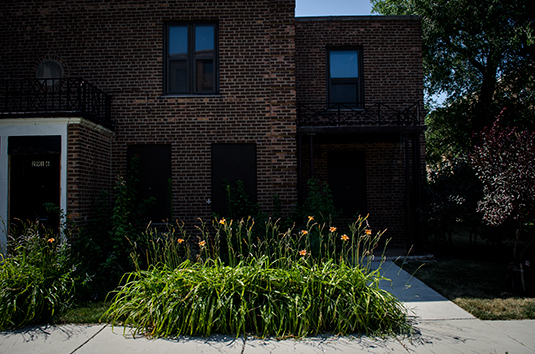 Residents say this garden is now overgrown, but used to contain tomatoes and other vegetables. The family that tended the space has moved away.