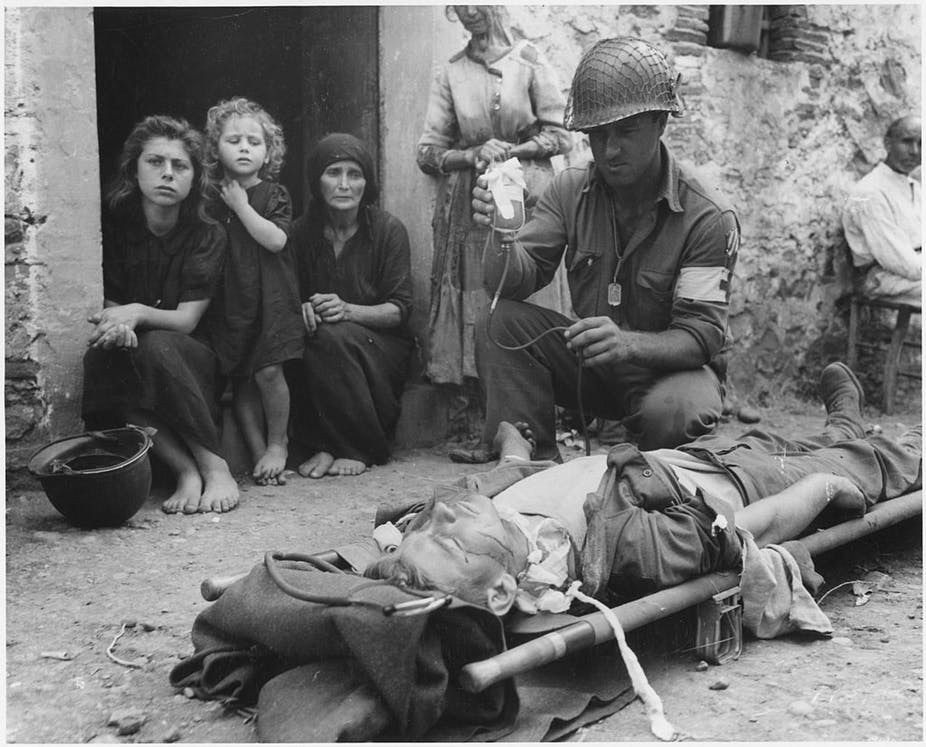 In December 1941, a few days after the bombing of Pearl Harbor and the U.S. entry into World War II, a Detroit mother named Sylvia Tucker visited her local Red Cross donor center to give blood.

Having heard the “soul-stirring” appeals for blood donors on her radio, she was determined to do her part. But when she arrived at the center, the supervisor turned her away. “Orders from the National Offices,” he explained, “barred Negro blood donors at this time.”

“Shocked” and “grieved,” Tucker left in tears, later penning a letter of protest about the whole ordeal to first lady Eleanor Roosevelt.

Today, this discriminatory blood program and African-Americans’ determined opposition to it are long forgotten, despite the fact that a few scholars, including Spencie Love, Susan E. Lederer, Sarah E. Chinn, and myself, have explored the topic.

This history is worth remembering. It provides an antidote to facile, feel-good stories about the “Good War,” stories that scholars such as Michael C.C. Adams and Kenneth D. Rose have long refuted but that live on in museum exhibits, blockbuster films, best-selling books and war memorials.

The story of how blood got desegregated also reminds Americans that, as novelist Ralph Ellison wrote nearly a half-century ago, “The black American … puts pressure upon the nation to live up to its ideals.”

Historian Robin D.G. Kelley puts it more broadly: “The marginal and excluded have done the most to make democracy work in America.”

In an age of resurgent racism, Ellison’s and Kelley’s words are especially important and timely.

The Red Cross Blood Donor Program began in early 1941 – and went on to collect blood from millions of Americans that the military shipped to soldiers fighting overseas.

“If I could reach all America,” asserted General Dwight D. Eisenhower at the end of the war, “there is one thing I would like to do – thank them for blood plasma and whole blood. It has been a tremendous thing.”

Tremendous indeed: The blood program saved many lives. But it also initially excluded African-American donors like Sylvia Tucker. When it did accept them, in January 1942, it did so on a segregated basis. Never mind that scientists saw no relationship between race and blood and that one of the world’s leading authorities on blood banking at the time, and the director of the Red Cross’s pilot blood program, was an African-American scientist named Dr. Charles Drew. Never mind that Nazi Germany had its own Aryan-only blood policy or that America’s principal rhetorical war aims concerned democracy and freedom.

To what extent military commanders segregated blood in the field was, during the war and afterwards, a matter of some debate. Officially, at least, the distinction between bloods remained in place for years. It was not until 1950 that the Red Cross stopped requiring the segregation of so-called Negro blood. And it was not until the late 1960s and early 1970s that Southern states such as Arkansas and Louisiana overturned similar requirements.

In one internal memorandum, the Red Cross called its donor program democratic, since “the point of view of the majority … ” – which its leaders assumed demanded blood segregation – “must be taken into account in a democracy.”

But many blacks and their allies had a very different idea about democracy, one that required all citizens be treated equally and without regard to race. They fought tirelessly throughout the war years to make that idea a reality, not simply in the military, in the workplace and in Hollywood films but also in the blood program.

These many battles constituted a nascent, surging, and, today, too-often-overlooked civil rights struggle that helped pave the way for the more famous movement of the postwar years.

Nearly all the major civil rights organizations of the day, including the National Association for the Advancement of Colored People, the March on Washington Movement and even the upstart Committee (later, Congress) of Racial Equality, made changing blood policy a top priority. One statement from a group of the nation’s most prominent black leaders put it this way:

“In justice to what we know to be the practically unanimous sentiment among Negroes in America, we affirm the need for alteration of the segregated blood plasma policy.”

In January 1942, for example, the African-American weekly the Cleveland Call and Post published an “editorial in rhyme”:

“The cross of Red, that burned so bright
In fire, storm and flood
Is now the crooked Nazi sign
That spurns a Negro blood!”

Activism on this issue extended well beyond these traditional places.

The Communist Party of Cuyahoga County in Ohio held a rally of 3,500 people, condemning blood policy as “Barbarian Hitlerism.”

An interracial group of precocious junior high schoolers at Harlem’s Public School 43 tested (with the help of their science teachers) the blood of a black student and of a white student. Finding no difference, they wrote an article in the school paper, made and distributed hundreds of posters, and held a public meeting – all in opposition to the Red Cross policy.

The most widespread form of protest, however, came from thousands of ordinary African-Americans who refused to donate blood and money to the Red Cross.

While roughly 10 percent of the U.S. population at the time, blacks made up less than 1 percent of all blood donors.

African-Americans contributed generously to the Treasury Department’s Defense Bonds: It is not a lack of patriotism that explains their halfhearted response to blood drives. The reason was a determined opposition to race-based exclusion and segregation.

Expressing these feelings best was a high school student from Cleveland named Geraldyne Ghess. Her poem appeared in the local black newspaper:

Had I wealth, I’d burn it all;
Not one cent for the Red Cross call.
Our money is good … our blood is bad.
But, still that shouldn’t make us mad.
Are they afraid they’ll all turn black?
Is that why our blood they lack?
Their skins are white as snow … it’s well.
Their souls are tarnished, black as hell.

In the end, this wide-ranging activism may have failed to democratize the blood program fully – at least during the war.

But African-Americans did – in the end – force the Red Cross to include them as donors.

Full-fledged integration, which took a few more years, owed everything to their work.

About Thomas A. Guglielmo

Thomas A. Guglielmo is an associate professor of American studies at George Washington University.