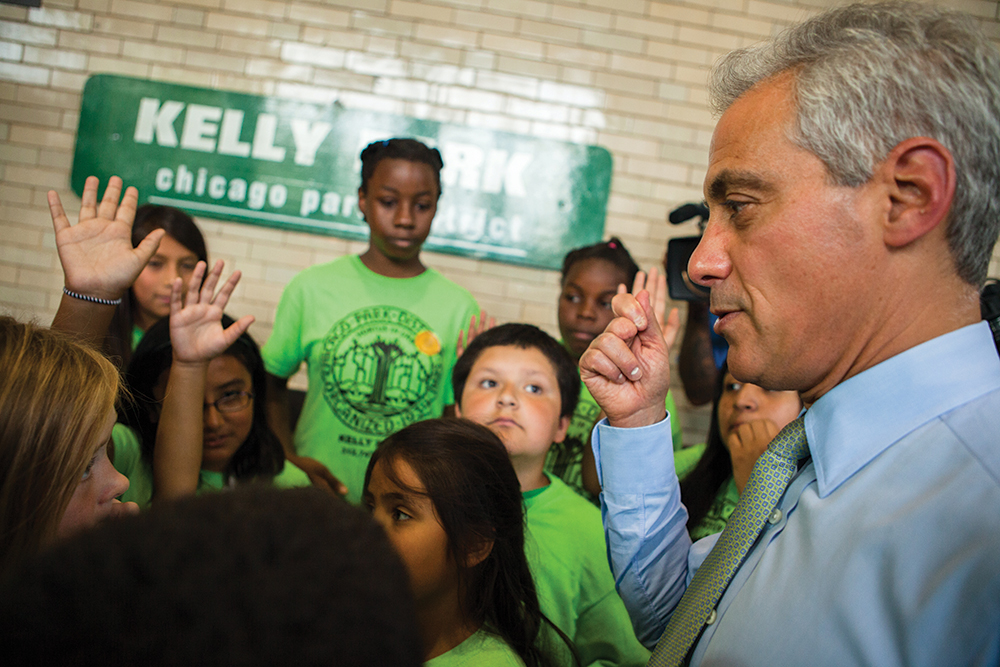 Adding preschool slots has been one of Mayor Rahm Emanuel’s main education initiatives. His plan to offer "universal" access to preschool is, in actuality, just for low-income families in Chicago. [Photo by Emily Jan]

Hellen Juarez was excited when she heard Chicago Mayor Rahm Emanuel announce that the city would introduce universal preschool.

“Universal means there will be open slots for those who need it,” said Juarez, a single mother of three whose youngest, a 3-year-old, is not yet in school.

But that isn’t how things have turned out. Emanuel’s plan adds only about 1,500 seats, for low-income families only. Juarez’s local Chicago Public Schools program has a three-month wait to get in, and it provides only two and a half hours of instruction a day.

“It’s not universal,” said Juarez, who decided not to try to take advantage of the city program after realizing how much it would cost her in train fare and lost work time.

Juarez’s experience is not unusual as more school districts and states expand access to early childhood education in an attempt to add learning time at a crucial point in children’s development. Politicians and advocates alike have seized on research that says starting school young offers lasting dividends — as well as on the political expediency of promising a benefit to every voter. As they have, the meaning of “universal” preschool has become, well, not so universal.

“People end up using ‘universal’ to cover the notion that they want to serve more than just poor kids and maybe they want to open it up to all kids,” said Steve Barnett, the director of National Institute for Early Education Research at Rutgers University. “But that doesn’t mean they’re going to serve everybody.”

In many places, including Chicago, promises of universal programs extend only to low-income families, but other cities have branded “universal” preschool as being accessible to families of all income levels. Some districts are picking up the full tab for preschool classes, but others, such as Denver, call their programs universal but don’t promise to cover all costs. And many other programs that are billed as universal fall far short of serving every student, at least right now. For example, West Virginia passed a universal preschool bill this year while emphasizing that not all children would be served for at least a decade.

Only a very few districts have attempted to do what New York City Mayor Bill de Blasio has done: provide free, full-day early childhood education for every child in the city whose family wants it, regardless of their income. (De Blasio’s program builds off of a decades-old city program, also called “universal,” that served only a fraction of eligible families.) And even there, where universal preschool is limited to prekindergarten, the city isn’t planning to be able to accommodate all families until next year.

That parents like Juarez can wind up perplexed about what “universal” means comes with the territory when securing preschool funding is a political feat, Barnett said.

“It’s undoubtedly confusing,” said Barnett. “If [politicians] started out trying to create a universal program and came up short, they don’t want to stop calling it universal.”

The confusion around the term doesn’t just stem from politicians and district leaders. In Denver, most news reports refer to the city’s program as “universal” preschool and many advocacy organizations have praised the city’s “universal” approach. But the word rarely appears in city-published materials, which instead say the program makes preschool “possible for all 4-year-olds.”

That may be because cities and states are still in the midst of figuring out what’s possible to do, right now. When it’s used, the term “universal” is often aspirational.

For example, in Denver, city officials gained support from more affluent voters by presenting a program that helps to cover at least a portion of every family’s preschool tuition, rather than fully subsidizing the poorest families.

“I could never have afforded it,” said Samantha Ruiz, a single parent in Denver whose 4-year-old daughter started preschool last spring. Without aid, she would have had to pay over $1,000 a month for her local preschool. Instead, she cobbles together state aid, federal Head Start funds, and money from the Denver Preschool Program to bring down the cost to just over $100 a month.

De Blasio in New York City largely repurposed what providers were already doing by funding them to extend their half-day programs to a full day. In Chicago, the mayor’s plan is intended to fill in the gaps between what the state and federal government already provide.

“In an ideal world, we’d have universal access for every child and family who needed or wanted services,” said Samantha Aigner-Treworgy, the national policy director for Ounce of Prevention, which advocates for early learning initiatives. “That said, we are in a time of limited public dollars. The way that ‘universal’ has played out is individual communities are looking at what feasible steps are.”

But sticking to what is feasible has left some families disappointed — and unable to secure the early education that might change their children’s lives.

“My family is not the only one that needs it,” Juarez said. “When they said universal, it’s not what I thought.”

Because each state defines “universal” preschool in its own way, it’s difficult to come up with a comprehensive list of states that currently have or are working toward “universal pre-K” or “preschool for all.” Chalkbeat attempted to create that list by researching cities and states, and speaking with the director of the National Institute for Early Education Research, Steven Barnett. If you see a city or state missing, let us know.

This story was produced as a collaboration among the seven news outlets participating in the Expanded Learning Time reporting project supported by the Ford Foundation.