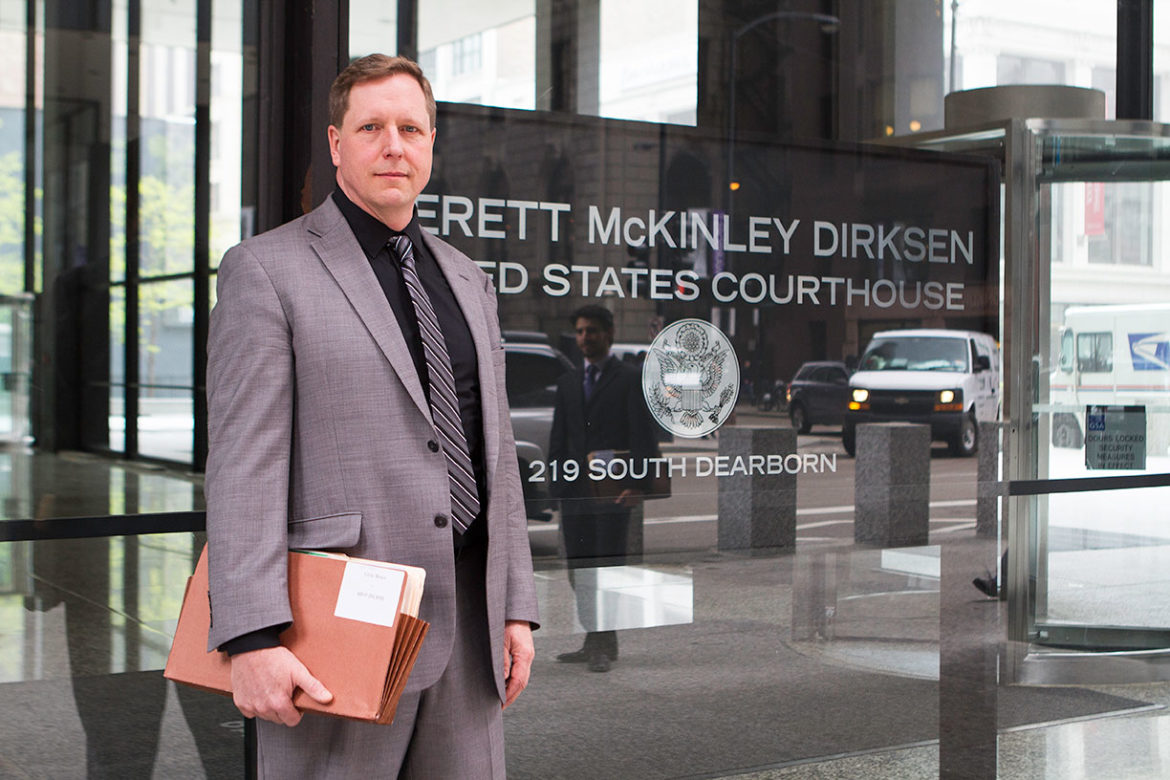 Editor’s Note: This is the second story in a two-part series about racial discrimination in the fast-growing temp worker industry. Around the country, temp agencies have used code words, symbols and gestures to illegally hire workers by sex, race and age. The tactics often hit black workers the hardest. In response to this discrimination, the Chicago Workers’ Collaborative, a labor advocacy group, developed legislation to make temp agencies keep track of the race and gender of all job applicants. The bill was killed, but several lawsuits continue to target racial discrimination in the industry. Read part one of the series.

Temp agencies opposed the bill in part because they worried it would fuel discrimination lawsuits against them.

Indeed, data on the disparity between applicants and hires can form crucial evidence in such cases. And Chicago-area agencies already are facing a few.

Chris Williams has become the attorney to fear. Since 2012, his Workers’ Law Office has sued six temp agencies and many of their clients for excluding black applicants. That’s on top of many other wage-related lawsuits and discrimination complaints filed with federal regulators.

Williams went from teaching English learners for the City Colleges of Chicago to union organizing in the 1990s. In 2000, he helped launch what became the Chicago Workers’ Collaborative.

After he was admitted to the Illinois bar in 2004, Williams co-founded and led a legal clinic to help immigrant workers who had been cheated on wages. That’s where he first heard about discrimination against black workers at temp agencies. It all fit together, Williams said.

“There is a desire to hire workers who are more vulnerable and thus subject to exploitative working conditions … which then reduces labor costs,” he said.

Even permanent workers aren’t immune, he said. “It drives down wages for everybody.”

Temp agencies, he said, are worried that his legal onslaught and the reform legislation is an “attack on their business model.” In December, the candy manufacturer that makes Lemonheads, Red Hots and Jujyfruits, plus two of its temp agency suppliers, agreed to a preliminary settlement of $1.5 million in a racial discrimination lawsuit.

“He is notorious for bringing these cases,” said Scott Polen, whose company, TempsNow, was sued last month.

“Quite honestly, because of Chris Williams, I wouldn’t even contemplate doing something like that,” he said, “because it’s just not worth it, not to mention it’s wrong.”

Another lawsuit, filed last year, focuses on the workers Most Valuable Personnel supplied to Gold Standard Baking. The mammoth brick-walled industrial bakery near railroad tracks on the Southwest Side churns out more than 10 million croissants a week for convenience stores and supermarkets around the country.

Of some 5,000 temps provided to the bakery by MVP over several years, 98 percent had Latino surnames, according to the suit. MVP disputes those numbers.

In court filings, company lawyers called the suit “nothing more than a charade, designed to harass Defendants.” The plaintiffs “are throwing metaphoric noodles at the wall, hoping that any allegation will stick.”

Beyond the legal sparring, though, there are the accounts of insiders such as former bakery supervisor Maria Carretero. Bakery managers, she said in a court declaration, called black workers lazy and worthless and told MVP not to send them.

“Quitan esos negros,” a plant manager yelled angrily in Spanish, she said. “Get rid of those blacks.”

“It was common knowledge that GSB (Gold Standard Baking) did not want to have African Americans at the factory,” Carretero’s statement said.

Reached by phone, a bakery executive, Mark Grosshans, said, “I don’t want to discuss this.”

Pamela Sanchez, the former MVP dispatcher who testified at the Springfield hearing, worked on-site at the bakery for several months. Black workers, she said, usually were assigned only on weekends to avoid paying Latino workers overtime or to graveyard shifts that were hard to fill. Even then, Sanchez said the bakery told her to “DNR” (“do not return”) those black workers after their shift. Michael Keys is one of the plaintiffs in a discrimination case brought against Chicago temp agencies.

Job orders became hard to fill as Latino workers complained about the heat, the speed of the machines and the lack of breaks, she said. But the bakery still didn’t want black workers.

Sanchez recently sued MVP and the bakery for retaliating against her after she complained about discrimination.

An MVP lawyer said in court that the reason for its largely Latino workforce isn’t nefarious at all: The agency’s Cicero office is in a predominantly Latino neighborhood.

Many temp agencies are. A 2001 academic paper found that Chicago temp agencies strategically placed their recruiting offices in Latino neighborhoods to attract the kind of workforce their clients wanted.

Black workers, of course, can travel. Some trek long distances. And as Williams notes, just across the street from that Cicero office is a mostly black neighborhood.

Without hard data, the other way to ferret out discrimination is through whistleblowers. But many are afraid to stick out their necks – and with good reason.

As SB 47 stumbled through the Illinois General Assembly last year, Rosa Ceja faced her own crucible. The former MVP dispatcher had spoken out, and the company sued her.

Ceja’s Facebook feed often features photos of herself in heavy makeup, sometimes mugging for the camera with pursed lips – the kind of beauty-shot selfies that abound on social media. Other times, her posts feature the young niece and nephew she raises in her Waukegan-area house.

But one day, Ceja wrote, in Spanish, “If MVP (Most Valuable Personnel) owes you hours (or) you’ve been victims of abuse please send me a message there are people interested in ending the injustices they are doing. Please share.”

Ceja was forced out of the company in 2014, she said, after complaining about sexual harassment by an MVP van driver. He recently was convicted of battery against her. MVP contends that Ceja abandoned her position.

Afterward, she, too, signed a statement about the discrimination she witnessed. She accused top managers of being complicit in rejecting black workers. The company, in its legal response, called it hearsay.

When Ceja posted on Facebook in December 2014 to see whether anyone else had problems with MVP, she wasn’t just poking around for fun. Federal investigators had asked her if she could find other victims or witnesses, according to her court filings.

Her Facebook friends asked her what she was talking about. Ceja replied: “People sometimes don’t get paid or if they report that they have been sexually abused they don’t care.”

The day before SB 47 was introduced in January 2015, MVP sued Ceja for defamation. “Ceja’s statements have damaged MVP’s reputation in the industry and the community,” the suit said.

Ceja panicked. She thought she’d lose her house. She stopped answering her phone. She couldn’t sleep. The company sent subpoenas to her Facebook friends who had commented on her post. Some were furious, Ceja said, that she had pulled them into a legal dispute.

The lawsuit dragged on as legislators argued over SB 47. Then last summer, the judge dismissed the suit. Ceja’s post was opinion, protected by the First Amendment.

Separately, the Equal Employment Opportunity Commission found reasonable cause that MVP’s lawsuit constituted illegal retaliation against her. The National Labor Relations Board issued a complaint that the company’s lawsuit violated Ceja’s rights.

But it had taken a toll. Ceja says she lost friends and job opportunities. And she’s still nervous. She doesn’t want anyone to know her address.

“People are very aware that Rosa has been sued,” he said, “and as a result are very nervous about speaking publicly.”

In this audio clip produced by Reveal, listen to Dan Shoman, a lobbyist for an alliance of Illinois temp agencies, tell legislators that SB 47’s requirement to track the race and gender of job applicants wasn’t necessary since the federal government already collects the data.  He had that wrong, but nobody caught the error.

At the final May hearing for SB 47 last year, Rep. Luis Arroyo said he had met with Rep. Ken Dunkin, the bill’s sponsor, and Dan Shomon, the industry lobbyist, to work out an agreement. Arroyo would vote the bill out of committee, but only if Dunkin agreed not to bring it to a final House vote without the opposition’s approval.

Dunkin tried to give himself some wiggle room. He would try to find a compromise, he said, but questioned the opposition’s willingness to negotiate sincerely.

“There’s been a whole bunch of unnecessary games being played with this, and I’m right in the middle,” he said at the hearing.

Republican Rep. Mike Tryon nailed him down. Tryon was named legislator of the year by Shomon’s alliance of temp agencies in 2011. An announcement at the time lauded him for doing “his best to make sure their needs are met.”

Tryon made Dunkin commit publicly that he wouldn’t push the bill further without the industry’s blessing. No compromise ever was reached, and the bill never got a final vote. Dunkin, who wouldn’t give an interview, lost to a primary challenger this year.

Now, Democratic Rep. Carol Ammons, whose career in Springfield is only as old as SB 47, wants to revive the fight.

Winning her seat in an upset to become the first black representative of the Champaign-Urbana district, Ammons is ambitious. She doesn’t think SB 47 went far enough.

“The industry is exploiting Latino workers, black workers, white workers,” she said. “The goal now is to expose the exploiter.”

Arroyo, for his part, said he’d back a bill like SB 47 if he had any evidence of discrimination.

“If there is an investigation and there is a fact that they only hire Latinos, I wouldn’t be for that,” he said. “I will get on the bill right away, and I would support the bill.”

This story was published in partnership with Reveal from The Center for Investigative Reporting, a nonprofit news organization based in the San Francisco Bay Area. Read part one of this story here.

Will Evans is a reporter for Reveal, covering labor and workplace issues. Follow him on Twitter: @willCIR