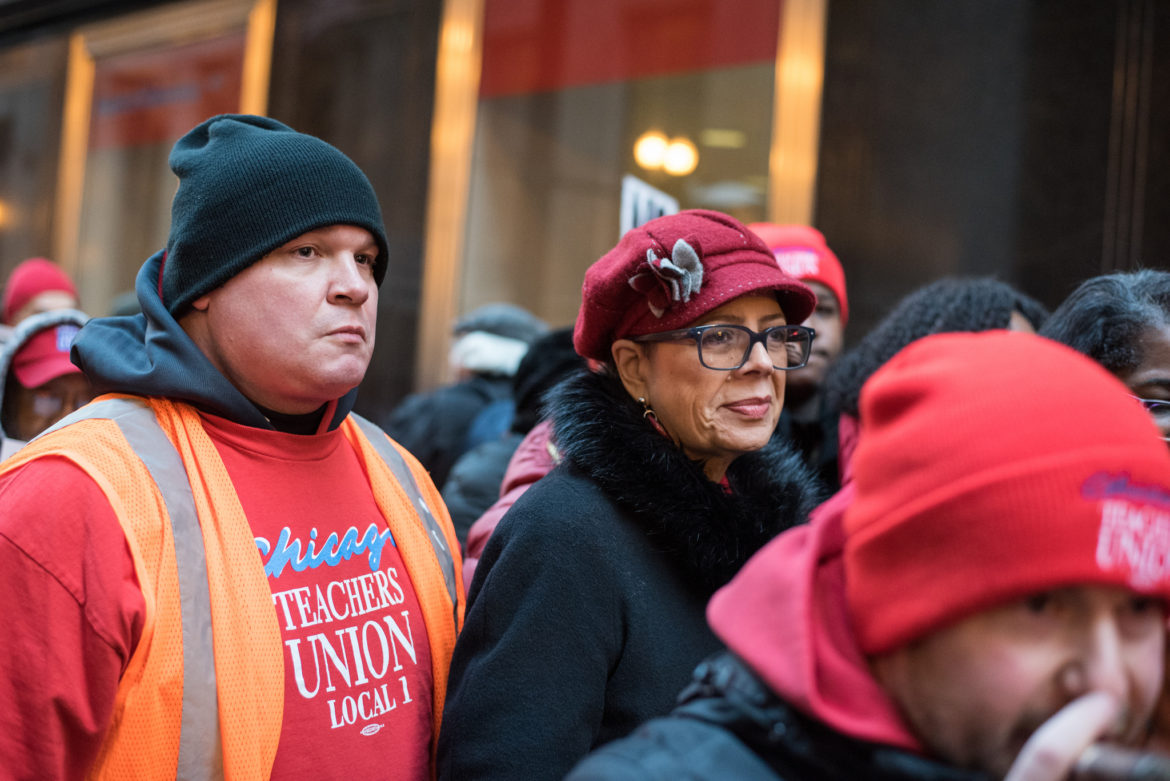 For the first time in at least two decades, the Chicago Teachers Union won’t have an election — because no one has filed to challenge popular CTU President Karen Lewis.

With no opposition against Lewis or any other candidates from the ruling Caucus Of Rank-and-file Educators (CORE) for the upcoming May elections, the slate was effectively granted another three-year term and the election has been cancelled.

Observers say the lack of organized opposition demonstrates members’ support for Lewis and her left-of-center caucus, which has taken on a broader “social justice” agenda and garnered support from activists outside the education sphere for last week’s “Day of Action.” The lack of opponents also legitimizes Lewis and CORE’s leadership at a time of contentious contract negotiations with the Board of Education, which encouraged teachers to break ranks for the Day of Action, a one-day strike.

“If you’re not being challenged, it typically signifies that there just isn’t any grassroots support for an alternative set of candidates,” says Robert Bruno, a professor at the University of Illinois at Urbana-Champaign’s School of Labor and Employment Relations who co-authored a forthcoming book about the 2012 CTU strike. “People are pleased with the direction that the union is going in.”

He added that Lewis, who battled with brain cancer last year but is back to work full time, is an inspiring and almost heroic leader to the rank and file. “Whether you agree with everything that she might support or say publicly, it’s hard not to be deeply moved by the level of personal investment,” he said. “People still need leaders. Organizations need strong leaders.”

In addition to Lewis, two of the union’s three other officers will return for a third term: Vice President Jesse Sharkey and Recording Secretary Michael Brunson. Financial Secretary Kristine Mayle had previously announced that she would not seek a third term, citing personal reasons. In her stead, CORE nominated Maria Moreno, a speech pathologist who has worked for the district for 14 years.

Nominating petitions — which had to include signatures from 5 percent of members — were due last week. But only CORE members filed the necessary paperwork to run for the positions of officers, area vice presidents or trustees. On Wednesday, the union’s House of Delegates voted to cancel the elections, meaning all those who filed to run for any position automatically won.

The lack of a union election will save CTU leadership time and energy during ongoing contract talks and the build-up to a potential general strike. A fact-finder is currently reviewing the most recent contract proposals from both sides and is expected to issue recommendations by April 16.

Sarah Chambers, an active CORE member who was automatically elected to the union’s executive board as an elementary teacher functional vice president, says nobody organized to run against the current leadership because “our membership trusts the leaders of the union. They trust Karen and Jesse.”

She adds: “They see we’re a fighting union. If you look around the country, there’s a lot of unions that are collaborationists. They collaborate with the boss instead of fighting back for what the members deserve.”

In 2013, just one slate ran against CORE. The Coalition to Save Our Union — which included members of UPC and PACT — pledged to focus more on member services and rebuild the union’s bridges with district management. Lewis won re-reelection by a near four-to-one margin.

Since then, organized opposition to CORE within the union has largely fizzled out. In part that’s because many members who were previously involved in CTU politics with other caucuses have retired or otherwise left CPS.

Ted Dallas, a former vice president under Stewart who helped form a new caucus after he was pushed out of the UPC in 2010, says he’s surprised by how quiet House of Delegates meetings have become. Dallas, who is now retired, goes to meetings sometimes and sits in the visitors section.

“Nobody gets up and says anything negative. It’s kind of weird,” he says. “In all my years, there were a lot of unhappy people all the time. No matter how good a contract could be, somebody wasn’t happy.”

“We never bashed any mayor,” he says. “Who we bashed was the Board of Ed. We actually worked with these people. I’m not saying we were like buddies. When we were behind closed doors, yelling, screaming, cussing, maybe almost coming to a fight. But I think that these guys have no relationship with the Board people and I think that’s part of the problem.”

Rosita Chatonda, a former teacher, CORE member and union organizer, tried to recruit disenchanted union members to organize a slate against CORE this year.  But few were interested.

“At this point nobody wants to run the union anymore,” she says. “The union has no negotiating power. Because of SB 7, if you became union president you would get onto a sinking ship.”

Senate Bill 7, signed into law in 2011, curbed tenure rights for teachers and made it easier for school districts to fire teachers with poor evaluations. The law also makes it harder for teachers unions to go on strike.

George Schmidt, a longtime union activist who helped start CORE, says he expects there will be organized opposition to the union leadership by the next time union elections role around — in 2019.

Some of that opposition may even come from current caucus members who disagree with the leadership’s strategies and focus, adds Schmidt, who publishes Substance News. That didn’t happen this time around, though, in large part because of the contentious contract negotiations and broader political fights in the state.

“We’re in a war,” he says. “We’ve got to stick together even when we have disagreements.”