Behind the city’s hard sell to be selected as the host city for the 2016 Olympics, Mayor Richard M. Daley is working with business leaders to make sure that Chicago has an ample supply of hospitality workers to take care of tourists.

Hospitality is one of the four shortage areas that are the focus of the city’s effort to revamp workforce development, including career training in Chicago’s public schools. The other areas are nursing, transportation and technology.

The campaign stems from the need to close a statewide deficit of so-called middle-skill workers—those who have a high school diploma and some additional training, but no college degree.

“The question is, ‘Why have we failed to connect [prospective workers] to these jobs?’ ” says Evelyn Diaz, the mayor’s point person on the campaign, called Project LEADS, an acronym for Leading Economic Advancement, Development and Sustainability.

One answer is the lack of solid information about which training programs are successful and where they lead, especially given the range of public entities that provide training, including CPS, City Colleges of Chicago, the Mayor’s Office of Workforce Development, the Illinois Department of Labor and the city’s Department of Children and Youth Services.

So a key goal of LEADS is to get a handle on training and outcomes. To that end, the mayor’s office is creating a research unit to gather and analyze data from the city’s various workforce development programs, says Larry Stanton, former chief officer of planning and development for CPS, who is heading the effort as a consultant. The Joyce Foundation provided funding for the venture.

Stanton says all of the entities have agreed to turn over information. He is in negotiations with a local university to conduct the work, which could be up and running by July.

Another problem, Diaz says, is a lack of focus, which leads to a disconnect between the training offered and the jobs that are available. LEADS is prodding workforce development agencies and schools to focus on promoting and training in the four priority fields where they expect available jobs to grow over the next decade.

Through this initiative, the city has been instrumental in helping community colleges and businesses open up seats in apprenticeships and training programs, to get more low-skilled workers ready for these jobs. But Diaz says this is a short-term strategy.

In the long run, schools are expected to play their part. “They provide the pipeline of students,” she says. “If students are not interested in these careers and are not qualified to go into them, then we have positions left open.”

At the moment, the district’s traditional career and technical education programs are not training many students for these careers. In 2007, fewer than 1,000 students completed programs in any one of the four key areas. Meanwhile, there were 325,000 jobs in hospitality, transportation and nursing in March 2008, accounting for a third of all jobs in Chicago, according to the Illinois Department of Labor Statistics. (The department does not provide similar detail for technology jobs.)

Only 10 students in CPS completed majors in transportation logistics, though Chicago is a crossroads for several major highways and rail lines. And only about 300 students completed programs in medical-related fields, despite the shortage of hundreds of nurses.

Diaz and the Mayor’s Office of Workforce Development are working with CPS officials to create new career academies focused on these areas. By next year, the first academy, in transportation, is set to open. (See related story.)

These highly specialized career academies, however, will only serve about 600 students apiece—too few to reach a critical mass and fill the available jobs. Diaz and CPS officials are still trying to figure out how to train more students.

A September 2008 report, “Illinois’ Forgotten Middle-Skill Jobs,” noted the lack of workers in 30 jobs that offer attractive wages. Among them are nursing and transportation, but other careers, such as carpentry and firefighting, were also noted.

About one in four city high schools offer career and technical education classes in one of the middle-skills career paths noted in the report.

Cheryl Freeman-Smith, director of workforce development for the Chicago Urban League, says young people could get a leg up on careers if CPS connected them with employers and created niche programs.

The Chicago Urban League has taken on the task, she notes. One program, for instance, is tied to British Petroleum’s refinery in Whiting, Ind. Participants train for one year to earn certification as a process technician and can earn $45,000. After two years, they earn an associate’s degree and can earn $65,000. (BP built a $200,000 training lab at Olive-Harvey College.)

“Much of what the participants learn, they could learn in high school and walk out ready to work,” Freeman-Smith says.

Chicago schools are part of a statewide problem. In 2004, 51 percent of the jobs in the state required middle-level skills; but only 43 percent of workers had those skills. This gap between supply and demand is projected to grow even larger over the next decade. Nationally, the gap is only 2 percentage points, according to the report.

Some middle-skills jobs are recession-proof, such as those in health care and transportation. But industries that have lost jobs during the recent downturn will come back, says Andrea Ray, a regional field director for The Workforce Alliance, a national coalition of groups involved in workforce development. Ray is based in Chicago and contributed to the middle-skills report.

Federal economic stimulus legislation is likely to include funding for jobs to rebuild infrastructure and for investment in clean energy, creating so-called green jobs. Over half of jobs in the green economy will be at the middle-skills level, says Ray.

Dan Swinney, executive director of the Chicago Manufacturing Renaissance Council, says he would love to see Chicago become a hub for this green technology.

He dreams of seeing old industrial parks in Austin on the West Side being turned into wide stretches of wind turbines, producing energy. But he wonders if Chicago has a workforce that is ready to build and maintain these parks.

“If we could teach young people how to build and work in green technology, we could open up doors,” Swinney says. “We could be a world leader.”

Says Ray: “We are going to need engineers and architects. But there’s also a place for the assemblers. It is like a football team. You can’t just have the quarterback. You have to have some other players to move the football down the field.” 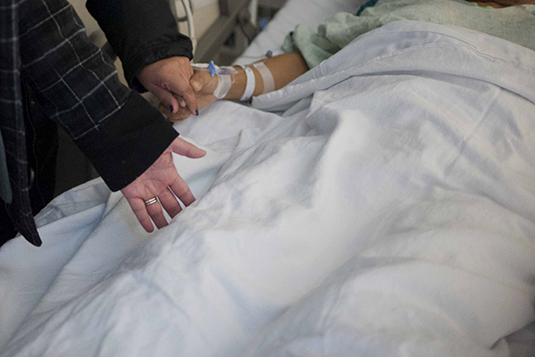 3:25 p.m. Friends and family make their way up to the seventh floor to visit Lopez in her recovery room. They try to cheer her up, but she tells them not to make her laugh because it hurts too much.