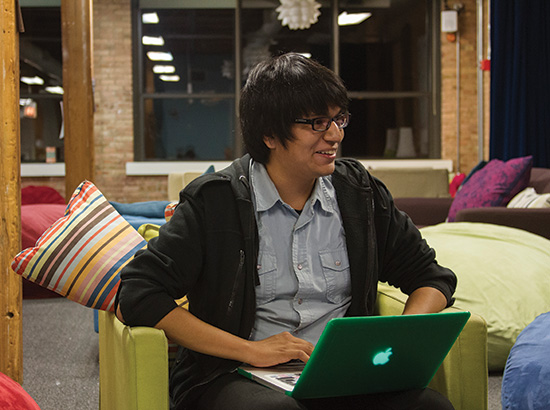 Former Chicago Public Schools student Daniel Artaega defends the public arts programs that he says kept him out of gangs and inspired his career. Photo by Sophia Nahli Allison.

Daniel Artaega’s biggest problem used to be that his name wasn’t unique enough.

A Columbia College Chicago junior and aspiring music entrepreneur, “Daniel” just wasn’t going to make him stand out of the crowd, so now he’s known as “Das.”
But earlier this year, Artaega stumbled into a new problem—one that wouldn’t be so easy to fix.

Artaega was surfing Facebook when he noticed that some of his old teachers were being laid off at Thomas Kelly High School in the South Side’s Brighton Park neighborhood. “I looked into it and couldn’t believe it,” he said. In all, 23 jobs were lost at Thomas Kelly, part of its $4 million budget cut this year.

Artaega hadn’t heard that, according to the Chicago Teachers Union, 1,000 public school teachers had been laid off, or that 50 schools were closing. Chicago Public Schools had cut $164 million in its budget from about 100 schools this year, according to a late-July analysis by Raise Your Hand for Illinois Public Education, a coalition of parents and organizations that campaigns for more public school funding.

But once he found out, Artaega had to tell as many people as possible what was happening—or, better yet, stop it from happening altogether. He founded Create Change with Art to do just that.

For Artaega, his acceptance to Columbia, and his ambition for the years ahead, now amounted to a debt he said he owed public schools’ arts faculty. “If you look at my history, it’s all the teachers who backed me up, who got me where I am today. They made me who I am,” he explained. Create Change with Art is the beginning of that repayment.

By promoting the value of art through social media and video documentary, Artaega’s campaign argues for the preservation of arts engagement in public schools. Artaega also partners with local nonprofits and private organizations that offer alternative arts resources for young people.

Create Change with Art has brought Artaega into one of the most controversial public school policies in Chicago’s history. Yet Artaega is somewhat of a reluctant figurehead. “The thing is, I’m not a leader,” he said. “I’m not a good speaker or that confident. I am just trying to find the leaders who can help me do this. But so far, they haven’t shown up.”

The Chicago Reporter sat down with Artaega to discuss the importance of public arts education.

How was your personal background a motivation for your campaign?
I knew I loved sound engineering since I was a little kid playing with toys. But I’m from Gage Park—it’s a low-income area. I didn’t have [access to] any music programs, so I would make up my own ‘music program.’ Back then, we had music tapes, so I would take my brother’s tapes and play them with headphones and sing along to the words.
Then when I went to high school, there was a music program, so I got more into music and arts. I started making myself busy. I took a broadcasting class where they gave me the sound engineer position. I learned a lot about audio and did the sound for all our high school events. Later, the teacher who taught the class wrote the letter of recommendation that would get me into Columbia College.

Music saved my life because, if I never knew it in grade school, I would probably have gone into a gang. I knew a bunch of kids growing up who got into gangs because we had no music programs, and that’s all that was available.

Why is closing public school arts programs a problem?
The arts are very important, especially here in Chicago. Chicago is known for the famous musicians and dancers and actors who come from here. Art is used in our everyday life; it’s always there. It inspires people and keeps them motivated. And kids love art. I know I loved it in grade school and high school—but they’ve had the opportunities taken away from them. It should always be a public responsibility to provide those opportunities.

Also, kids need to keep themselves occupied [with] something that they like, and that’s going to help them in the future. If all you teach them is math, reading and writing, it’s not fun. You need them, but it’s not as fun as making music, dancing, film or acting. It’s important to have all those as well.

If you take away the programs that kids like, they are going to find other things to do, or they will just be on the streets. When you are a kid you look for things to do, and art is something kids really like.

Chicago is an arts city—not just plain art, but music, dance, drama. That stuff is fun. Kids who don’t join sports teams join arts clubs or they do art on their own. Art is exciting, and even more, it boosts creativity. Knowing that you have a goal, and learning how to create and finish projects boosts confidence in yourself and your capabilities. I have never found concentration so easy as when I am working on my projects, and I know that’s how most young artists feel.

What is unique about using art to raise awareness?
If art can inspire kids enough to keep out of gangs, it can inspire adults to make the right decisions, too. When I studied modern art, I learned that it is possible to create awareness through art, and that people have been doing it for years.

What the teachers are doing right now clearly isn’t working. Instead of having a protest and strikes of just 200 angry people, imagine marches of people playing music and dancing. We need to create a buzz that will draw media attention. If you go to the protests or online and start hearing what people say about the government, it’s just noise—a bunch of trash talk that doesn’t help anyone.

At Create Change with Art, we don’t want to just trash talk. We are going to do something productive about the problems instead. ‘Speak softly and carry a big stick’—that’s what President [Theodore] Roosevelt said. It means we have to be careful how we talk but still be serious and ready for action.

What are some specific tactics Create Change with Art uses to raise awareness?
We document the issue using video recordings and upload it to websites like YouTube so the word gets out. We also interview people affected by the budget cuts—teachers and parents mostly—so they can share their story.

The biggest protest we’ve been to happened in May at Daley Plaza right after they decided to close the schools. It was pretty sad to know this protest even had to happen. What’s worse is that, when the [Chicago] Blackhawks won the Stanley Cup, the whole of downtown was full of people. So, more people were aware of the Blackhawks winning the Stanley Cup than of teachers being laid off. That means that it’s not really put out in the news like it should be, or that people just don’t care.

We’re also developing our online presence. I’m teaming up with developers to create a smartphone app. It will be like Yelp for youth organizations—it will find youth organizations that open doors for kids. It shows a map of Chicago; you put in your ZIP code, and it finds the ones in your area. Or you can do a keyword search for what you want to learn. For example, a list of where you can learn to play guitar.

How effective has your campaign been so far?
When I first talked to students at Columbia about the issue, some of them had no idea it was going on. They were like, ‘Wait, how is this even legal?’ But now they’re involved—journalists, video people, graphic designers and others. As artists, we have to create awareness that this is happening. In history, every time a crisis hits, heroes appear, and right now justice isn’t being served for Chicago’s kids.

But there’s still a long way yet. We are trying to gather together all the groups that care about the issue, building up a ‘justice league.’ I want to document the work of organizations like Raise Your Hand for Illinois Public Education and Common Sense: the Coalition for Fair Funding to show the good work that they do.

What are your ultimate goals for the Create Change with Art campaign?
To bring back arts opportunities for kids and to connect kids to the programs that are available outside of public school.

We need to gather these arts organizations together to make kids aware that there are still arts opportunities in the City of Chicago. We want to help the kids themselves to create change with art. We want to market all over the city that there [are] arts programs. If you go to Englewood or Back of the Yards, you wouldn’t really know that there are local arts opportunities, and they’re also where there’s a lot of bad violence. We need to market to them that there is other stuff going on in their neighborhood, and keep them off the streets.

It would be awesome to reopen the public school programs, but I don’t think that would ever happen. People really tried to make the mayor, or Chicago Public Schools, listen. But if they’re not going to listen, it’s time we do something for ourselves and help each other make the best of an unfair situation.