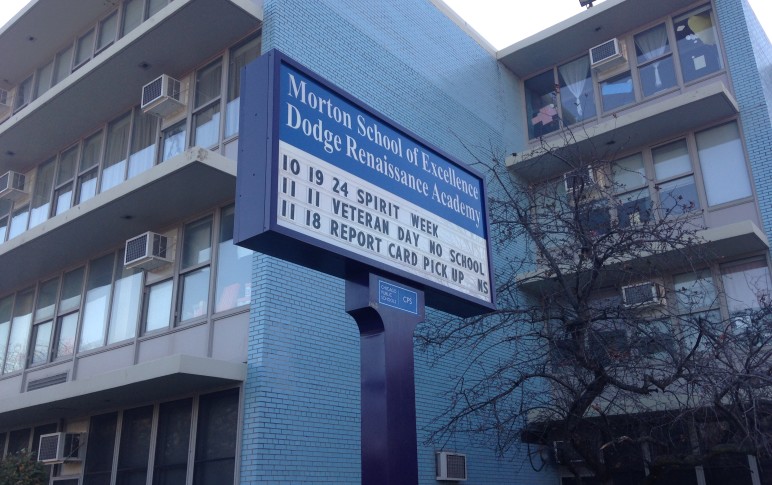 While the Academy for Urban School Leadership, or AUSL, is best-known today for its efforts to turn around low-performing Chicago schools, it got its start as an innovative teacher-training program with roots in the Golden Apple Foundation.

Martin “Mike” Koldyke, a venture capitalist, founded both non-profit organizations — Golden Apple in 1985 and AUSL in 2001 — and led their expansion into new teacher-focused endeavors.

By 1998, Golden Apple was recruiting and preparing career-changers to teach math and science in CPS through Golden Apple Teacher Education (GATE). The program turned out 400 such teachers between 1998 and 2007.

But Koldyke wanted to play a much bigger role in improving the CPS teacher pipeline and arranged an AUSL partnership with National-Louis University. Together they crafted a program loosely modeled on medical residencies for doctors.

Teacher residents work in pairs with regular classroom teachers under the guidance of a veteran master teacher. They earn a $30,000 stipend– $40,000 for middle and high school math teachers — and take university courses outside the school day to earn a master’s degree and full teacher certification within a year.

AUSL launched the program by hiring 16 award-winning teachers—most National-Board certified or Golden Apple-connected—to open a  school, called The Chicago Academy, where they all would teach and mentor the residents.

When CPS saw the lab school idea in AUSL’s proposal, it revisited the 1995 school reform law and saw how its provision for privatizing services could be used to create contract schools. The Chicago Academy was the first and was followed by Dodge Elementary, which CPS closed and reopened with AUSL-hired staff.

(Having seen better days, Dodge is now slated for consolidation with Morton elementary school, also managed by AUSL. Together, they enroll just 462 students.)

AUSL’s first class of residents included Andre Cowling, a Gulf War veteran and former executive with M&M/Mars. During his residency, he worked intensively with an English-language learner who was struggling in reading. The boy’s reading level jumped two grades in less than a year.

Cowling went on to spend nine years in Chicago Public Schools, first as a teacher, next as principal of Harvard Elementary and finally as principal of Collins High School. He now works with New Leaders for New Schools in Baltimore.

Cowling’s post-residency career may have been unusually successful, but it was not unique. Six years post-launch, in 2009, the AUSL residency program had graduated 243 teachers. Of those, 80 percent were still teaching in CPS. (Residents agree to teach for a minimum of four years in CPS following completion of their training.) Today, 51 percent of AUSL alumni past their fifth year post-residency continue to teach in CPS.

By 2006, then-CPS CEO Arne Duncan was calling on AUSL to take over low-performing, “turnaround” schools. It also took over The National Teachers Academy, which had shown poor results for students.

Michael Whitmore, who joined AUSL in 2007 as managing director for teaching and learning, says the shift to turnarounds prompted some changes in the residency model. Mentors and residents began using Charlotte Danielson’s Framework for Teaching as a common language for discussing teacher practice, and Doug Lemov’s book, “Teach Like a Champion,” was selected as a foundational text for teaching basic pedagogical and classroom management strategies.

AUSL’s strict discipline practices have sparked criticism in some quarters, as have the teaching practices Lemov advances. “We’re trying to create joyful classrooms with high expectations for students,” responds Whitmore. “We don’t feel any one Lemov strategy is draconian or doesn’t advance a safe and joyful learning environment for students.”

While some AUSL schools, like Morton Elementary, have seen dramatic test score gains over the years, most have outpaced the district by much smaller margins. The combination of extra adults—i.e. residents—in its training academies and additional resources across all its schools have helped AUSL mitigate initial skepticism from parents.

When Jean-Claude Brizard arrived in CPS as chief executive officer, AUSL principals and teachers told him that the teacher residency was key to their progress because it created a pipeline of teachers who were on the same page in both classroom management and instruction.

Since its founding, AUSL has graduated more than 880 residents, making it one of the largest residency programs in the nation.

Shortly after taking office in 2011, Mayor Rahm Emanuel pledged to double the number of schools under AUSL management, which then stood at 19. He has come close to making good on that promise. Today, AUSL has contracts to manage 32 schools serving 18,000 students, despite the extra costs that entails. Of those schools, 10 have been designated as training academies, including three start-from-scratch sites that were never turnarounds: The Chicago Academy, which houses both an elementary and a high school, Tarkington Elementary and Solorio High School.

See “New CPS leadership likes its schools run by outside group,” WBEZ July 2011 and “At AUSL, progress, but ‘this is not magic’,” Catalyst February 2012.

Asked whether declining student enrollment or fewer turnarounds might mean AUSL residents would be placed in non-turnaround schools, spokesperson Shana Hayes said, “That’s a conversation we’d be engaged in with CPS, should that come to be.”

Meanwhile, AUSL expects to graduate its 1,000th resident in June 2017.

Nationwide, traditional teacher preparation programs face shrinking enrollments. Though it will be a long time before the decline grows large enough to create a teacher shortage, the drop may signal a shift in the kind of pre-service training teachers want.

Last August, DePaul University announced a new partnership with AUSL intended to shore up enrollment in its teacher-prep program. DePaul is providing academic coursework for both residents and aspiring principals within the AUSL network. The partnership is AUSL’s second with a local university — National-Louis continues to train the lion’s share of residents.

AUSL has also taken a leading role in expanding teacher residencies nationally. Years ago, AUSL partnered with teacher residency programs in Boston and Denver to launch a network now known as the National Center for Teacher Residencies.

In 2014, NCTR released a report showing that 34 percent of residents in its member programs were people of color, compared to 17 percent of U.S. teachers overall. The report pointed to residency programs for the Denver Public Schools and the Aspire charter network as models of good practice.