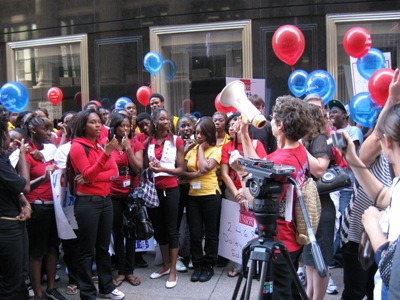 At Wednesday’s board meeting, CPS officials announced plans to
restructure some of the district’s debt obligations to balance the
system’s budget, rather than draining all of the district’s
stabilization reserve funds, as had earlier been proposed.

At Wednesday’s board meeting, CPS officials announced plans to restructure some of the district’s debt obligations to balance the system’s budget, rather than draining all of the district’s stabilization reserve funds, as had earlier been proposed.

It is unclear how much money the district will save this year from debt refinancing. “We are now confident that we will not need to reduce the reserve balance to zero,” Chief Financial Officer Diana Ferguson said.

The move could weaken the district’s credit rating, Ferguson said. To keep that from happening, CPS has set up meetings with credit rating agencies and will show them its final budget.

“We are taking that proactive step… so that they can make their final ratings with clear and complete information,” Ferguson said.

Schools CEO Ron Huberman said that there was little alternative to the steps. Without them, “hundreds and hundreds of teaching positions, programs… or other things that would impact our students” would be cut, he said. “Things like [lower] class sizes that had been restored would be cut.”

CPS plans to replenish the reserve funds partly with $236 million in money owed to it by the state, which is expected to enter CPS coffers in about six months, officials said.

The budget proposal passed unanimously. Also passed was a $10 million proposal to provide an optional 90 minutes a day of supervised computer math and reading activities to students at a handful of schools.

CPS decided to restructure its debt in response to concerns from board members about draining the system’s entire reserve fund.

She took the unusual step of changing the typical order of the board meeting. Rather than starting with public participation, she asked Huberman, Ferguson, and Chief Human Capital Officer Alicia Winckler to report on the steps CPS had taken to fill its $370 million budget deficit.

During Ferguson’s presentation, she responded to questions the district had received about why it couldn’t use its $800 million line of credit, announced in June, to stem teacher layoffs.

The district has not yet received the money, she said, because it is still negotiating the deal with banks. She compared it to an overdraft-protection policy on a checking account. “The line of credit does not constitute new revenue to CPS,” she said.

Huberman began by noting that federal education jobs funding will allow high school class sizes to be restored to last year’s levels. Some of the district’s laid-off bilingual teachers – who were cut because of a $24 million decrease in state bilingual funding, nearly a 25 percent decrease – will also be re-hired with the money, he said.

He again defended the decision to lay off teachers, saying the layoffs were made “after finding 75 percent of our cuts elsewhere” and noting that central office expenses are now just 3.5 percent of the district’s operating budget. He said the district has cut 1,200 administrative positions.

Huberman also cautioned that the district may never see the extra $106 million from the federal education jobs funding bill.  The money could fund far more than the 400-some positions that will be immediately restored, Huberman said, but CPS is going to wait before it takes risks on calling back even more teachers.

“We think it would be premature if we restore other positions without understanding the technicalities that are going to be imposed on them,” he said.

She complained that she had too little time to negotiate with CPS over the plans. “There has been no announcement, either written or verbally to me or my office, that we were not going to receive our raises this year,” she told the board.

Amid continued Chicago Teachers Union protests, officials also shed more light on the district’s process for recalling teachers who were laid off before the passage of the federal

Winckler gave a final tally of the district’s layoffs: more than 1,050 teachers, 200 coaches, and 500 support staff have been cut. A job fair held Tuesday for affected teachers, she said, drew more than 600 candidates, but just one-tenth as many positions.

Layoff notices that have been given to teachers, but have not yet taken effect, can be rescinded by seniority and certification, Winckler said. CPS has already begun rescinding the layoffs of some bilingual teachers and high school teachers.

But teachers whose layoffs have already taken effect may be out of luck. In those cases, Winckler said – for instance, in the cases of teachers at Track E schools – the positions would be re-opened and someone would be hired to fill them.

Chicago Teachers Union president Karen Lewis appeared before the board to demand that all the federal money be used immediately to re-hire teachers before the start of the school year.

“Secretary Duncan was very, very clear that this money was to be used to re-hire teachers,” she told the board. “We sacrifice every single day. We cannot destroy a well-prepared, well-trained teaching staff while other sources of funding are available.”

After Lewis spoke, she asserted that even in the rescission process, CPS was giving principals too much discretion to decide who to bring back. “It’s still sort of up to the principals to make those decisions,” she said.

Before the meeting, about 100 Chicago Teachers Union supporters rallied on the sidewalk across from 125 S. Clark St.

Members of the group held blue and red balloons with white lettering that said “Our Children’s Dreams,” and symbolically popped them.

The protesters included dozens of Robeson High School students. Several of them appeared before the board, asking CPS to delay its routine twentieth-day teacher layoffs at the school because Robeson just switched to the Track E year-round schedule.

“Historically at Paul Robeson there is an increase of several hundred students during the month of September and October,” teacher Leah Kohl said. “If you displace our teachers based on the Track E twentieth day, you will have to hire many of them back a month later.”

Huberman said that CPS would “figure out a contingency plan” and share it with the school.

“Unfortunately, Robeson is one of the few schools we’ve had that is not transitioning (smoothly) to Track E,” he said.

He also noted that the school would need to help students who came in late catch up.

“We can’t expect the kids who are showing up on Sept. 7 to just pick up where the Track E students are,” he said.