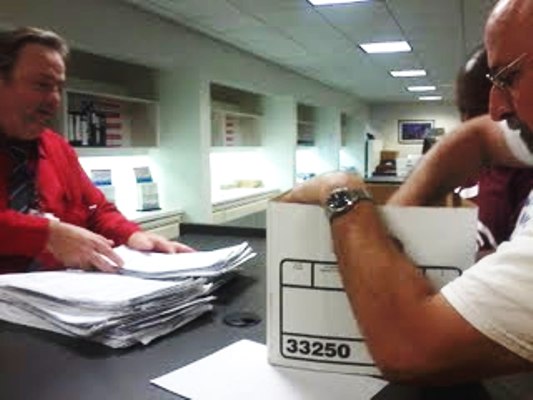 Organizers hand petitions for a referendum on an elected School Board to a staff member at the Chicago Board of Elections.

A coalition of community groups pushing to get an elected school board believes they have enough signatures to get a referendum gauging public support on the November ballot in 204 precincts, about 9 percent of the precincts in Chicago.

About 70 people, including students, teachers and parents, were on hand Monday morning as organizers walked the petitions with about 9,700 signatures, into the Chicago Board of Elections office. Phil Cantor, a member of Teachers for Social Justice and a CPS parent, said the group expects to have the petitions challenged.

The referendum is symbolic, but organizers hope it will prove there’s broad support for an elected school board. The precincts with the referendum on the ballot stretch from Ravenswood and Rogers Park on the North Side to Altgeld Gardens and Beverly on the South Side.

Organizers went after the precinct referendum after a technicality was used to block 10 aldermen from getting the item placed on the ballot, said Cantor. A citywide referendum also was blocked when pro-Mayor Rahm Emanuel aldermen placed three other questions on the November ballot, which is the maximum allowed.

Emanuel has said he wants to retain the power to appoint the school board because electing it would bring more politics into the system.

However, organizers reject this point. April Stogner from the Kenwood-Oakland Community Organization noted that UNO Charter School Executive Director Juan Rangel was Emanuel’s campaign manager. UNO is being allowed to expand, although three of its schools are failing, she noted.

“How can you get more political than that?” she said.

Organizers say the next step is to work on getting state lawmakers to change the law. Chicago has never had an elected school board, but for a time had a messy nominating procedure in which community groups offered up names from which the mayor had to choose appointees.

That changed in 1995 when the mayor was granted more control of CPS and was expected to take responsibility for it.

Some have suggested that a hybrid school board, with some members elected and some appointed, would be more practical. But members of the coalition, called CODE for Communities Organized for Democracy, think that each person on the school board should be elected, said Tonya Payne, one of the organizers.

“An elected school board is accountable to the people,” she said.

CODE leaders say they think an elected school board would likely reverse the trend of opening charter schools and closing neighborhood schools. They would like to see a more community-based vision for school improvement rather than the current system, which they see as top-down one.

But they admit there’s some danger implicit in the idea of electing a school board.

Well-heeled groups, like Stand for Children and Education Reform Now, who support the expansion of charter schools, could run slates of candidates, as could the mayor.

Pauline Lipman of the University of Illinois at Chicago said CODE would also want to get some campaign finance reform to accompany an elected school board.