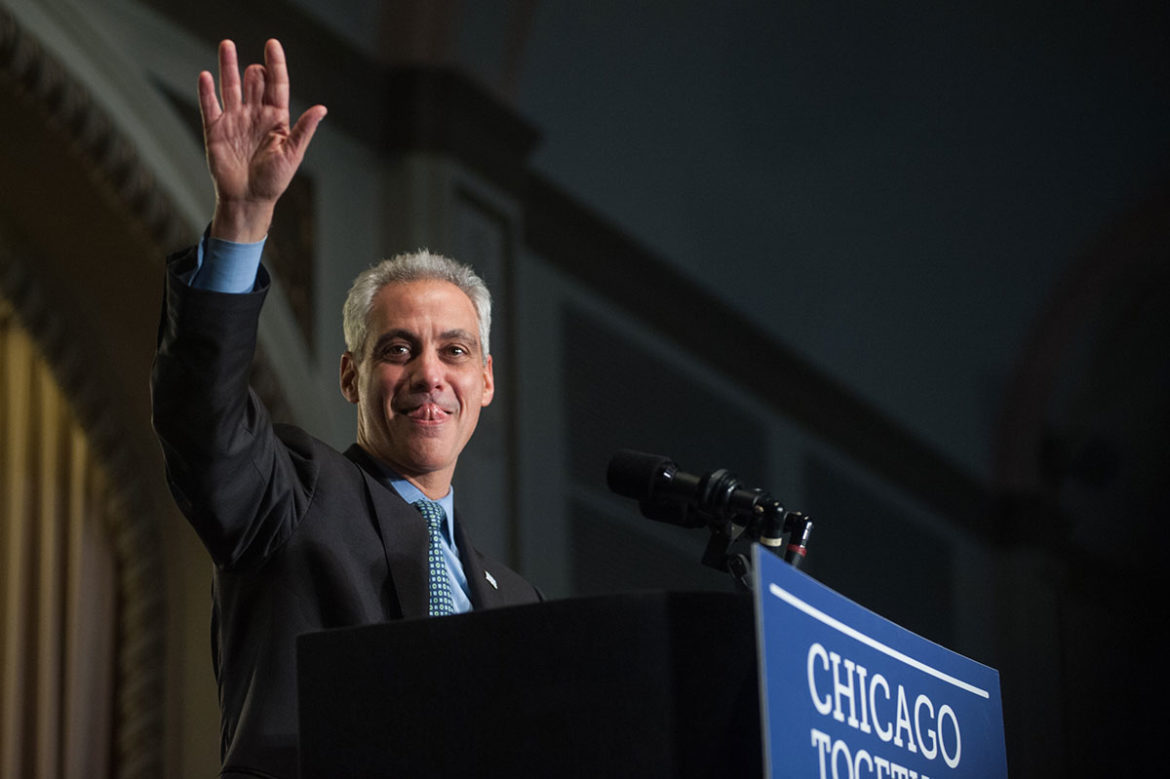 How will Rahm Emanuel go down in this city’s history? Judging from the agenda for his final months in office, it will be as a leader who embraced and built on the worst Chicago traditions of corruption and segregation.

Right now Emanuel is pushing two gigantic new TIF districts – for the huge new developments called Lincoln Yards and “the 78,” on the Near North and Near South sides, respectively – both of which are tainted by the aldermanic corruption scandal swirling around federal investigations of aldermen Ed Burke and Danny Solis. He’s also pushing a new police and fire academy on the West Side and has selected a contractor for that project with an extensive history of shady dealings.

Both mayoral candidates oppose both TIF proposals, and both oppose the police academy. But Emanuel and his City Council allies are aiming at pushing the deals through before a new mayor and council take office.

Emanuel’s eight years in office have seen numerous scandals, starting with the attempt to bury the video of Laquan McDonald’s murder. His hand-picked Chicago Public Schools chief, Barbara Byrd-Bennett, went to prison for corruption. The CEOs of Emanuel’s two favorite charter school operators, Nobel and UNO, resigned in disgrace. Sexual abuse at CPS was covered up. Unsafe levels of lead in drinking water were covered up, and hearings on the issue have been blocked. And a new whistleblower’s lawsuit offers evidence that the code of silence covering up misconduct in the Chicago Police Department is as strong as ever.

That’s on top of the troubles of Burke and Solis, who were two of Emanuel’s top allies. So it’s no surprise that ethical issues abound in Emanuel’s final act.

Together these two TIFs could total $1.6 billion, not counting hundreds of millions in financing costs. That’s a lot of money to spend on deals that could be crime scenes.

The property tax attorney for Lincoln Yards developer Sterling Bay was, until recently, Ed Burke.  Burke was famous not just for the large number of times he recused himself from council votes involving his clients, but for failing to identify his conflicts of interest and continuing to influence proceedings on his clients’ behalf right up to the vote. According to the Better Government Association, he has routinely written ordinances, participated in debates, and presided over committee hearings – and then recused himself at the last minute.

That’s just what happened with Lincoln Yards. At a December 12 finance committee meeting chaired by Burke, progressive aldermen appeared to have the votes to advance a TIF reform ordinance that would have required developers to show that an area would not attract investment without a TIF subsidy, and that the area was blighted, vacant or obsolete. Passage of the ordinance would have threatened TIF proposals for Lincoln Yards and “the 78.”

Burke suggested calling a quorum and Ald. Patrick Daley Thompson scurried out of the chambers. The ordinance was blocked, and the TIF for Burke’s client was saved.

We don’t know much about Burke’s behind-the-scenes role in advancing the Lincoln Yards development, and we deserve full disclosure. We do know that his work reducing property tax assessments for Sterling Bay had the effect of maximizing the revenue going into the TIF, and minimizing the portion of the development’s property taxes going to schools and other taxing bodies.

We also don’t know much about backroom dealings to promote the so-called 78, though we know the development is almost entirely within the 25th Ward, where Ald. Danny Solis – until recently the chair of the zoning committee – is under federal investigation. Solis’s support for the development was highlighted in a 2016 FBI application for a search warrant for the alderman’s home and offices.

And by the way, the property tax attorney for “78” developer Roosevelt/Clark Partners LLC was none other than Ed Burke.

Together these two TIFs could total $1.6 billion, not counting hundreds of millions in financing costs. That’s a lot of money to spend on deals that could be crime scenes.

Meanwhile, Emanuel has selected AECOM, a global construction firm based in Los Angeles, to build the controversial $95 million police academy. As Jonah Newman of The Reporter has detailed, the company has paid hundreds of millions of dollars of fines and settlements over the past four years to resolve allegations of wrongdoing including overbilling, submitting false invoices, and using substandard materials.

The budget committee is expected to consider the AECOM contract March 12, and the full council could approve it the next day. It’s also anticipated that ordinances authorizing TIF districts for Lincoln Yards and the 78 will be introduced at the March 13 council meeting.

Meanwhile, the two multi-billion-dollar mega-developments seem to continue what Chris Kennedy called Emanuel’s “strategic gentrification plan.” Under Emanuel, population loss has continued – in particular the city continues to lose African-American residents – with growth in one demographic only: young people (under 45) earning over $100,000 a year.

That’s the goal of Emanuel’s focus on a “global city,” on attracting corporate headquarters and building bike lanes. That focus hasn’t benefited black communities: from 2010 to 2017, covering most of Emanuel’s two terms – a period of economic recovery – the Chicago area’s black unemployment rate fell by just 0.4 percent to 17.2 percent, close to triple the rate for African-Americans nationally.

Emanuel also failed to speak up when an affordable housing proposal in a white middle-class area was subjected to racially-tinged attacks.

Lincoln Yards and the 78 are explicitly designed for the new gentry. Out of 10,000 housing units planned for the 78, just 500 will be affordable. At Lincoln Yards, Sterling Bay just doubled the number of affordable units it will build onsite to a whopping 600. That leaves 5,400 luxury-priced units.

Emanuel wants us to spend hundreds of millions of dollars to created what organizer John McDermott terms “essentially gated communities without the gates.” McDermott adds, “We need to stop building segregated communities.”

We certainly need to stop subsidizing them.

Finally, what does it mean that Emanuel is pushing these projects through a lame-duck council after Chicago voters backed two mayoral candidates who oppose them? I’d say if Emanuel refuses to recognize the results of a democratic election, he should stop calling himself a Democrat.