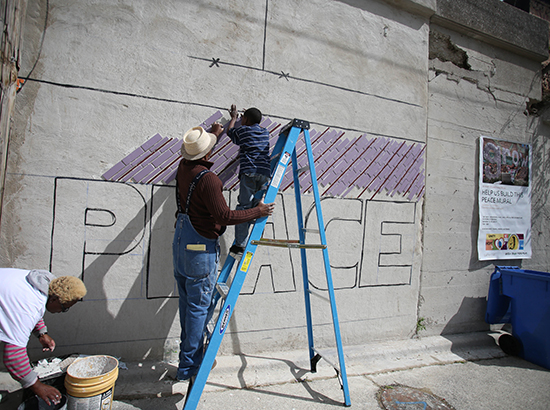 Members of the Woodlawn and Englewood communities began building a Peace Mural at 63rd Street and Wallace Avenue on Chicago's South Side on Sept. 13. The mural, part of a Community Day event sponsored by two nonprofits, will promote unity and peace in the neighborhoods. [Photo by Grace Donnelly]

Members of the South Side’s Woodlawn and Englewood neighborhoods joined together on Sept. 13 to create a Peace Mural, a vibrant art wall at 63rd Street and Wallace Avenue that encourages positive relationships and nonviolent solutions to problems.

According to the Chicago Tribune’s listings on violent-crime reports in the city, Englewood ties two other areas for 1st and Woodlawn ranks 15th among the city’s 77 community areas.

Work on the mural will continue on Saturdays at noon through September.

See what they accomplished the first day:

Grace is a photojournalism fellow at The Chicago Reporter.