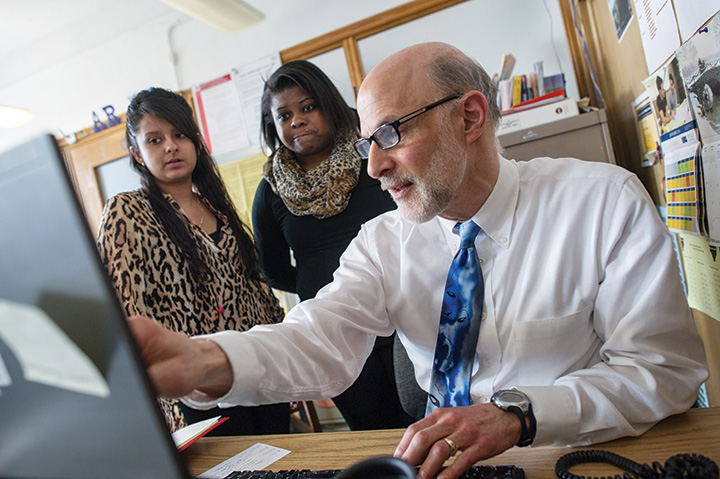 Zeckhauser takes his paperwork and photocopies the electric bill the young man brought as proof of residency.

“Right now, what I know is you’re a man who’s brought in a lot of pieces of paper, with really cool dreadlocks. Oh, and you have a good GPA,” says Zeckhauser, a program manager and staffing specialist for Youth Guidance, a social service agency that runs federal Workforce Investment Act programs in Kelvyn Park, Harper and Wells high schools. Jumping right to business, he asks, “What are you good at, in your opinion?”

So begins Dekel Wicks’ job hunt through the Workforce Investment Act Youth program. WIA, which provides intensive help to students who have barriers to employment, such as homelessness or poverty.

In any given week, Zeckhauser juggles myriad tasks—hustling to find candidates to fill job orders, doggedly following up on applications his students have submitted, helping students practice for job interviews, and coaching them through tasks such as filling out online applications and calling prospective employers.

Though his main task is to help students find work, Zeckhauser’s ultimate goal is broader: to get students to connect with something—anything—that will put them on a path toward post-secondary education or a career.

Zeckhauser says that 14 of his are working, two had jobs but quit, and eight (five of whom have just joined the program) do not have jobs yet. Before the year ends, he’ll aim to reach a total enrollment of 20 current students, while continuing to shepherd more than a dozen program graduates, who receive a year of follow-up services.

Those results might seem impressive, but they are a drop in the bucket compared to the number of students in need. A fall 2013 report by the group Measure of America found that 5.8 million young adults nationwide—including one in three young people in South Lawndale and the Lower West Side, and one in four young African-Americans citywide—are “disconnected,” or unemployed and not attending school or job training.

Connecting students with a job or post-secondary training before they leave high school lessens the odds that they will join the ranks of the disconnected. And in an era when career-changing is common and more jobs are in the service industry, “soft” skills like attitude and punctuality—skills that WIA teaches—are increasingly important.

Dave Simpson, director of counseling and prevention services at Youth Guidance, explains that most WIA programs target unemployed adults. Reaching out to youth is a new strategy.

“We are sort of an experiment to see if WIA can reach out into the schools and capture kids before they become chronically unemployed,” Simpson says.

Though small, the experiment has a moderate success rate so far: 69 percent of students have found a job, enrolled in college, enlisted in the military or are participating in job training by the time they exit the program.

If not for WIA, Simpson says, many students would find that soft skills—personal qualities such as being reliable and having a strong work ethic—are a big barrier to employment, even more so than the ability to do a job.

“Some of the things that have been stopping them in other places are beginning to stop them on the job too,” Simpson explains. “They’re feeling like they don’t want to go in [to work], or the boss is really unfair—all these small social-emotional crises that end up costing kids their jobs.”

Students often don’t know how the work world operates, and Zeckhauser says much of his time is spent teaching students the basics.

Zeckhauser, with his white beard and balding head, is approaching retirement but relates comfortably to students, like a jovial, easygoing uncle. He sets clear expectations, letting students know he can’t just hand out jobs like Santa Claus. Instead, he teaches them insider tricks to navigate the system and beat the other applicants.

The first step is helping students identify their strengths through an interview. Then they develop a short “elevator” speech explaining their goals and why an employer should hire them. To create it, they fill out a worksheet called “Giving an Employer Reasons to Interview Me.”

“I was surprised to learn there is a niche in the marketplace for kids,” Zeckhauser says. “If you’ve got a dependable young person, there are firms that need them.” Companies need workers to fill afternoon, evening and weekend shifts—times when young people are more likely to be available.

No matter the job, experience is valuable. “Some jobs are putting money in a kid’s pocket and helping them to learn how to deal with life with a job,” as well as building references, Zeckhauser says. “Others are going to lead someplace.”

Running interference is also important. One example: A young man was offered a security job and given an assignment but did not have the details of where he should show up. When the person the student contacted didn’t respond, Zeckhauser tracked down a phone number for a higher-up in the company and helped the student get to the job site on time.

Students from middle-class families are more likely to get that kind of help from home. Zeckhauser fills that role.

As Dekel Wicks’ interview continues, he tells Zeckhauser he’s good at “helping people, cleaning, and moving stuff around. In school, I’m good at reading, writing, and a little bit of science. I don’t write a lot, but that isn’t a problem. I like reading.”

“Why do you like reading so much?” Zeckhauser asks.

“I learn a lot of new stuff when I read,” Wicks replies. “It helps me learn new words.”

Next, Zeckhauser asks Wicks what his friends say he’s good at.

“Some say I’m good at giving advice,” Wicks says. “My friend needed advice about his girl problems. He was having trouble communicating with his girl, and I told him to just be himself, like he was with me and others.”

Kelvyn Park has been a good school for him, Wicks says, except that he’s gotten into two unnecessary fights—off school grounds—out of self-defense.

Zeckhauser asks him if he’s had a job interview before.

“I was scared,” Wicks says.

“That was normal. Everybody’s scared during interviews,” Zeckhauser says. “As we work together, I’m not going to say your anxiety is going to go away, but I will give you tools, and if you use them, the interviews are going to be easier.”

He explains more. “The reason I’m asking you about what you’re good at—that’ll be some of the stuff you want to tell employers, that you like to learn, that you’re energetic.”

“One of the best jobs I know about, it’s not easy to get. It’s a summer job that pays about $12 an hour, as a park district camp counselor,” Zeckhauser says. “That’s one we have to move on in February. Your baby-sitting experience is not just one or two kids, but herding whole groups. And my impression is they don’t have enough men candidates. Be sure to put in baby-sitting as a work experience, whether you get paid or not.”

Zeckhauser asks Wicks if he is outgoing. “There are a number of jobs out there where if you are comfortable using that million-dollar smile of yours to help others feel connected, that could give you an advantage in the job market,” he explains.

Wicks previously had a job at a local non-profit, where he helped clients apply for assistance with heating and electricity bills. “Did you just take [the papers you copied] or did you talk to the people?” Zeckhauser asks.

“I talked to the people,” Wicks says.

Before wrapping up the interview, the two talk about Wicks’ goal of going to college. He would be the first in his immediate family to earn a bachelor’s degree.

“If you go to college, who gets hurt?” Zeckhauser asks. First-generation college students often face subtle barriers to finishing college, such as family obligations.

“Everybody would be upset if I had to go stay in a dorm,” Wicks admits. “Don’t get me wrong, they’d be happy to see me go. But I think they’d probably cry. I think I would too.”

Zeckhauser ends by finding out about Wicks’ availability—“the number one thing firms want to know,” he says.

After school is fine, Wicks says. But weekends “depend on if my mom has plans or not. I baby-sit out south for my mom.”

Zekchauser presses for details. Has Wicks’ family said they do not want him to work weekends, or does he “just know”?

The interview over, Zeckhauser shakes Wicks’ hand. The first lesson: “Business handshake—a slight squeeze. That’s how you give somebody a good impression.”

Zeckhauser says it’s important for him to get to know students and ask detailed questions about their families and school experiences.

“The key to helping kids retain jobs is to understand what system they [live] in. It affects their ability to cope with all the struggles that come from having a job. If they have a support system, they can roll with a lot more,” he says. “What came up very late in the discussion with Dekel is the weekend babysitting commitment. If he’s not available weekends, that’s going to cut down on the options. He may, on the other hand, be a very easy sell for child-care jobs.”

Finding jobs for teens goes hand-in-hand with furthering their education, Zeckhauser says. “You help a kid get a job and they are more likely to graduate high school and go on to college,” he says.

He makes sure their jobs are compatible with school schedules. In contrast, students who find jobs on their own might end up leaving school to work.

Once students graduate, the support doesn’t end. Earlier that morning, Zeckhauser met with a graduate, 19-year-old Marbeline Molina, who is working her way through school at one of the City Colleges. Zeckhauser helped her find a job at clothing retailer T.J. Maxx earlier in 2013, and now she’s looking for a second job.

Like Wicks, she’ll be angling for a summer job as a camp counselor.

“Do you work with children?” Zeckhauser asks. She mentions babysitting. “Then we need to stick that in here.”

Zeckhauser also coaches her on how to ask her current supervisor to be a reference for a second job. “Start it with, ‘I love working here.’ Always start requests with that,” he says.

After helping Molina, Zeckhauser meets with a young man who is picking up a consent form for a shopping trip. Zeckhauser often takes young people who can’t otherwise afford it out to shop for work-appropriate clothing.

The young man’s job—his first—is working in cart return at a local supermarket.

“The biggest challenge,” Zeckhauser says, “is going to be finding polo shirts in November.”