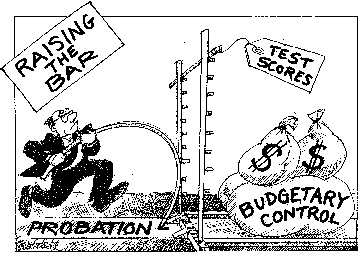 U.S. District Court Judge Charles Kocoras says he may end federal oversight of Chicago’s desegregation consent decree by 2006. The School Board and the U.S. Department of Justice agree to an interim plan until then, under which the board must meet a number of conditions, including considering new standards for admission to magnet schools and issuing public reports on school-by-school spending.

Thanks to last-minute recruiting, nearly 6,900 parents and community members signed up to run for 5,698 seats in April’s local school council elections. It’s the lowest number of candidates ever. Three-fourths of schools will have contested elections, and two schools did not have enough candidates for a quorum. Meanwhile, community groups call for legislative hearings on the status of LSCs.

To boost teacher recruitment, especially in shortage areas such as math and science, CPS announces new hiring policies. Principals can now make guaranteed job offers to teachers as early as March, and new hires will no longer lose their jobs after the 20th day of school if enrollment does not meet projections. The board also expects to hire more teachers from alternative-certification programs.

Mayor Michael Bloomberg won approval from the Panel for Educational Policy of his strict new promotion policy for 3rd-graders. Just before the vote, Bloomberg fired and replaced three panel members who were against the plan, according to the March 16 New York Times. Students who score in the lowest quartile on citywide English and math tests will be retained unless they raise their scores after attending summer school.

A federal complaint filed by an advocacy group for parents and students charges that the district violates the civil rights of minority students by allowing a disproportionate number of inexperienced and uncertified teachers to teach in low-income, minority schools. The Education Law Center wants the district to overhaul the assignment process, according to the March 9 Philadelphia Inquirer. The teachers’ union contract allows teachers to choose where they work based on seniority. Schools CEO Paul Vallas says the district is working to bring additional highly experienced teachers to poor schools.

Teachers with National Board certification are more effective in raising students’ test scores, a new study reports. Researchers found that students taught by certified teachers scored significantly higher on end-of-year reading and math tests, compared to students whose teachers started but did not finish the certification process, according to the March 10 Raleigh News & Observer. Poor students showed the greatest gains. The study analyzed three years’ worth of scores for 3rd- through 5th-graders. North Carolina has more certified teachers than any other state and pays those who earn the credential a 12 percent salary supplement.

“We’d like to believe that [the board] is good at hiring principals, but we haven’t seen a record that indicates that. Until then we’ll go with democracy.”

Madeline Talbott of Illinois ACORN on the new policy that could put half of schools on probation, giving the board, not LSCs, authority to select those schools’ principals.

Our council [is] having a tough time recruiting parents. Several said that they would be interested, as long as they didn’t have to worry about missing time from work. Does the law mandate that employers grant time to employees to serve on LSCs?

Some employers do grant leave time for school-related matters, but state law does not require them to do so, says Sarah Vanderwicken of the Chicago Lawyers Committee for Civil Rights Under Law. To accommodate more parents’ schedules, alternate between different meeting times or switch off days of the week, suggests William Rice of CPS’ LSC relations office.

SPRINGFIELD—More than 3,100 people have signed an online petition urging legislators to restore $3.8 million in funding for the Golden Apple Scholars, a scholarship and mentoring program for aspiring teachers that Gov. Rod Blagojevich has proposed cutting from the state’s budget.

If funding is cut, 380 students stand to lose $5,000 scholarships next fall. Another 300 new teachers will lose mentors arranged through Golden Apple.

Belmonte says only two out of every 10 graduates from Illinois colleges of education typically teach in Illinois for five years or more, while almost nine out of 10 Golden Apple Scholars complete their five-year commitment to urban schools. Currently, 325 of 420 Golden Apple graduates are teaching in CPS.

Blagojevich spokeswoman Rebecca Rausch says, “We had to make some tough calls, and this was one of them.”