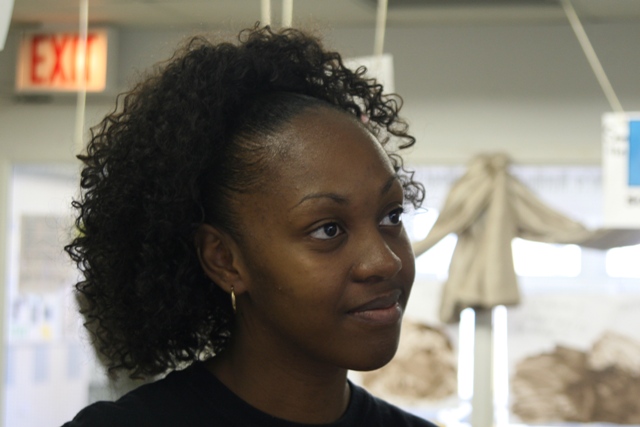 A local Early Head Start parent is traveling to Washington, D.C. this Friday to share a new parent engagement strategy with White House officials. Since parents are a focus for new Schools CEO Jean-Claude Brizard, Nastassia Jackson and her children’s teachers hope the time is ripe for the idea to catch on. Their pitch: A parent board, like a miniature local school council, that “administrates alongside the teachers” and gives family members the final say about what happens in each classroom.

The “Classroom Vision Council” was the brainchild of Sherrell Carr, an assistant teacher at the Educare Center in Grand Boulevard. Carr says she came up with the idea while “sitting in her living room” one night. Carr says she stayed up until 2 a.m. writing, fleshing out the concept for hours.

Jackson – already a parent volunteer at the Educare Center, where her twin 3-year-old boys go to Early Head Start – was the first parent whom teachers asked to participate a year ago. She says the goal was simple: to bridge the gap between parents and the teaching staff.

The group surveyed parents about their goals for the year, as well as their children’s strengths and weaknesses.

One of the board’s first projects involved literacy activities. Board members asked parents if kids had an at-home library, collected donations of 120 brand-new books, and suggested that the parents read children 25 picture books each week.

Each week, the parents were asked to turn in two “book report” forms, on which they transcribed children’s retellings of two of the books.

“We saw, from October up until January, how much the kids’ vocabulary had improved,” Jackson says.

Subsequently, the council planned family science and math activities in the classroom, which parents were expected to attend, as well as family field trips.

Jackson says it wasn’t hard to convince parents to come to the events and do homework with students.

“I would kind of be assertive,” she says. “One child told her mom, ‘You have to come because everybody’s mom and dad was there – I was by myself,’ ” Jackson notes.

Carr says parent engagement took off “once we gave them a formal platform.”

“We said, ‘You’re going to be the ones who make the significant decisions,’ ” she says. “They have a vision of what they want.”
Council structure

All of the classroom’s parents are considered members of the council; they are represented by a teacher-appointed board, which consists of a chair (who was Jackson), a vice-chair, and a secretary.

The teachers and the board co-administer the class with twice-a-month meetings, and seek feedback from the rest of the parents as necessary.

The board structure developed out of an initial meeting with four parents, Carr says. She thinks the increase in parent engagement is worth any challenges that might arise.

“When you start talking about a new era, you need to start focusing on new ways of doing things. Those new ways involve engaging everyone’s perspective,” Carr says. “The more we can pull each other in, the more effective what we’re doing will be.”

Jackson says no conflicts came up between teachers and parents. But the idea is probably easier to implement at an Educare Center than it might be elsewhere.

Parents were already comfortable with the teachers at the start of the year, because the Educare Center keeps children with the same teacher for up to three years, from birth to age 3. Small class sizes – there are just eight students in Carr’s class – may also help.
Seeking a broader impact

Even so, Jackson and Carr hope the idea will find a wider audience.

She is attending the White House Community Leaders Briefing Series on Aug. 26 in hopes of sharing the council’s results with officials from the U.S. Department of Education and the White House.

She’s also seeking to meet with local elected officials in their Washington offices, to share the model with them.

“Parent engagement is not a new message, but the collaborative platform is new,” Carr says. “Teachers have always said, ‘You’re invited in the classroom and give us your input.’ But have parents actually felt that?”

Because of the council activities, Carr says, the classroom received more parent volunteer hours than any of the center’s other rooms.

And the skills parents use in classroom advocacy and leadership are the same ones they need in parenting. “To have someone that really depends on you, that’s what makes you a leader,” Harvey-Dixon says.