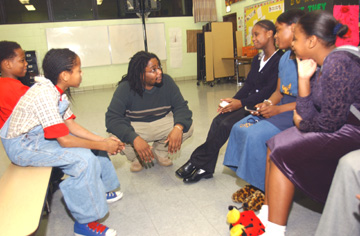 At Triumphant Charter School in Back of the Yards, Sheneka Harris isn’t just another 6th-grader—she’s a “first-year scholar.” As such, she and her classmates are expected to uphold the school’s “scholar culture,” a set of tough academic and behavioral standards designed to set early adolescents on the road to success in high school and college.

Triumphant’s culture—which includes an eight-hour day, weekly study on a community college campus and grades on behavior as well as academic coursework, among other features—is light-years away from what Sheneka experienced at Henderson Elementary last year. “My class was the baddest class in the whole school,” she says. “We had, like, 17 teachers in one year. They just kept on switching them around.”

Changing the school experience for students like Sheneka has been Triumphant’s mission since it opened seven years ago. For more than two decades, founder Helen Hawkins honed her skills for reaching disadvantaged youth by running Olive-Harvey Middle College, an alternative school for dropouts where, last year, 68 percent of graduates went on to four-year colleges and universities.

Hawkins founded Triumphant to keep students from dropping out, but she says getting it up and running has been a greater challenge than starting the alternative school. And after seven years, the school is still struggling to succeed with its 200 students.

On the surface, Triumphant looks like a failure. Its reading scores are comparable to those of CPS schools on probation, and this year, it is the only charter required under the accountability measures of the federal No Child Left Behind Act to offer students both the option to transfer out and extra tutoring. (Only 15 students applied for transfers to higher-achieving schools; none was approved.)

The students who come to Triumphant typically have exceptionally low test scores, as well as attendance and discipline problems. The school also serves more special education students than any other charter in Chicago.

Even so, there are some signs of progress. Since 1998, attendance has risen to 94 percent, up from 85 percent. Mobility has plummeted from 43 percent to 17 percent. The percent of students reading at national norms has risen from 12 percent to 23 percent. And for the last five years, reading gains have exceeded the CPS accountability target of one year’s growth for every year of instruction, according to the Department of Research and Evaluation.

“We’re not satisfied. We don’t think we’ve arrived where we need to be,” says Principal Lisa Kenner.

“We spent the first six years building a very strong foundation of scholar culture. Now we go to the next level of practice, which is fine-tuning our instruction and curricular planning.”

This year, teachers are examining student work against rubrics, or guides, that are based on state standards, and they are developing school-wide assessments in math and reading, practices CPS is trying to implement citywide. But Kenner doesn’t expect overnight miracles. “We are being very strategic in the use of our time and the examination of data,” she says. “We are not gonna blow off the charts this year.”

Scholars—Triumphant never calls them students—are expected to come to class prepared, to ask questions and to show they are actively engaged in learning. Teachers grade them daily on their demeanor and adherence to the school’s dress code. And semester report cards include grades for 15 different behaviors, including listening, exercising self-control and supporting peers.

Though teachers are strict, they are also supportive. “In this school, they treat everybody with respect,” says third-year scholar Karla Chico. She adds that students have a voice in how the school makes decisions.

The school day at Triumphant is far different from that at most elementary schools. For one, it is eight hours long. And it starts with a school-wide morning assembly, during which students complete a short writing assignment on a current events topic or on personal goals. They also recite the Pledge of Allegiance, followed by the “scholar pledge” to work hard, act with decency and diligence and strive for excellence in school and in life.

For the rest of the morning, students take math, language arts and foreign languages courses during 50-minute periods, to familiarize them with the structure of high school. “It makes you feel like you’re older than the grade you are in,” says Jasmine Evans, a second-year scholar.

In the afternoon, a 100-minute block allows extended time for instruction in science and social studies, using a theme-based curriculum that also integrates math and English skills. The 100-minute block, coupled with a half-hour silent reading period, forces students to concentrate on one topic for a longer period of time.

Once a week, on Fridays, the emphasis shifts toward college. Proudly wearing official ID badges, scholars travel to Olive-Harvey Community College to spend three hours with Olive-Harvey Middle College students, listening to lectures and presentations in an auditorium. In the afternoon, students swim or work out and take sign language, music, art and computer classes.

There’s also exposure to the world beyond the neighborhood and the city. Each year, the oldest students go with middle college students on a tour of historically black colleges and universities. And through study trips to such places as Mexico, Costa Rica, Senegal and Canada, scholars get the chance to practice their French and Spanish. (Money for the trips comes from fundraisers, donations and sales of calendars that students make.)

“We concentrate on developing the complete and total scholar,” notes teacher Spencer Gould, who thinks CPS can learn from that approach. “They will be exposed to two languages, four countries and 25 colleges before they graduate from 8th grade. We don’t stop at the test scores. We don’t stop at the grades. We ask, ‘What is your total learning experience?’ … We talk to them about their effort and we talk to them about their experience.”

Because many students previously were retained, the school tossed out the traditional single-grade classrooms and developed a curriculum that addresses a wide range of academic needs. “It’s hard, but it’s worth it,” Hawkins says. “Kids who’ve been held back two years don’t want to be in class with [younger] kids. Here, if a kid is 13 and in the 6th grade, nobody’s going to know.”

The flexible curriculum and emphasis on scholar culture helps students overcome longstanding fears of failing. That’s evident in a language arts class aimed at students who need extra help. As Eric Beach reads his “I am” poem—based on a commonly-used template that helps beginning poets get their ideas down on paper—two other students follow along over his shoulder, ready to help if he gets stuck on a word. He doesn’t.

“I am dedicated. I am smart,” Eric reads. “I want to be dedicated to scholarship. I am diligent and smart. … I feel angry about my mom. I touch my faith. I worry about shootings. I understand that I will make history.”

“Outstanding,” says Kenner, who teaches the class in addition to serving as principal. “Thank you. And I love how scholars supported you.” After class, she explains this was the first time Eric had ever read aloud to his classmates.

Curriculum and structure alone don’t make a successful school, so Hawkins works hard to recruit, retain and even grow her own faculty. Finding them has been especially challenging, she says, made even more difficult by her desire to recruit African-American men and create an environment where young African-American boys can thrive.

So far, though, she’s had success. Eight of the school’s 13 teachers are black men. “Young boys need to see men,” says Hawkins. “They don’t have fathers at home. They have fathers here.” Young girls need that, too, she says, adding that the men on staff are “showing little girls how they should be treated.”

Many teachers are graduates of historically black colleges and universities, and they engage in a friendly rivalry to see how many students they can interest in their own alma maters.

Several teachers are graduates of Olive-Harvey Middle College, a fact that’s particularly pleasing to Hawkins. “They know [the school’s] vision,” she says. “They saw it work for them.”

This year, for the first time, all of Triumphant’s teachers came back, Hawkins says. Her daughter, Julie Stanton, teaches math. And Hawkins keeps up her own classroom skills by teaching basic math. “I bought a lot of favor with the teachers,” by doing that, she says. “It really keeps your feet on the ground. You [realize you’re] not all that great. Kids still talk. If your lesson isn’t good, they’re gonna talk. It keeps you humble. It makes me less judgmental of teachers.”

Hawkins also takes pains to share leadership with her staff. For example, Kenner arrived as a teacher when Triumphant opened, but took on greater responsibilities and finally went through New Leaders for New Schools training to assume the principalship.

“I just let them emerge,” she says. “I have a lot of assistant heads of school. Those people who want additional responsibilities, you find ways to give it to them.”

This summer, Triumphant plans to move to the former Cuffee Elementary building at 84th and Justine, which will provide more space and bring them closer to Olive-Harvey.

And thanks to a $215,000 grant over three years from the Bill & Melinda Gates Foundation, Triumphant can now offer its graduates the chance to go straight to Olive-Harvey Middle College. (Previously, graduates had to go elsewhere until they turned 16, because all the middle college’s funding was targeted to serve youth ages 16 to 21.)

About 20 Triumphant graduates are part of the first class to go straight to Olive-Harvey. One of them, Johnny Allen, is grateful he can avoid his older sister’s experience. After leaving Triumphant, she enrolled in a regular CPS high school for two years but had a bad experience and transferred to Olive-Harvey as soon as she could.

“I believe that most of the public schools wouldn’t fulfill my needs as far as education,” says Johnny, who went to summer school to boost his reading scores before starting as a freshman this year. “Ms. Hawkins is my role model. I like [her] one-word mission, and that’s college. I’m going to accomplish that goal.”