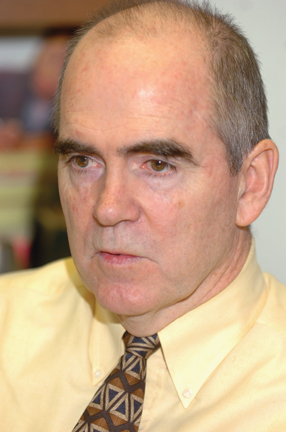 Arts programs don’t magically raise test scores, but they can level the playing field for kids of differing academic abilities and teach students skills, like the ability to work cooperatively, that transfer to other life situations, says David Roche, who heads the new arts office created last summer in partnership with the non-profit Arts Education Initiative. Roche has hired curriculum supervisors for music, visual arts, and theater and literary arts and is now working on blueprints for arts programs. Roche talked with writer Rebecca Harris about the importance of arts education.

What prompted the district to create a fine arts department?

The goal was to create a curricular office like the office of literacy or math and science. This is a cultural change to talk about [arts] curriculum. It’s a sea change. The arts are often are considered a dessert, rather than one of the main food groups.

What has kept CPS from offering better arts education?

If a principal does not feel that the arts are adding value to their school, they’ll replace it with something else. Or a principal retires, a new principal may come in, and within a year a program may disappear or the [new] principal may not be as good at getting grants that have underwritten arts programs. And all the pressures of No Child Left Behind, like [raising] test scores, have clouded the understanding of what is a quality education, because it’s not that measurable.

Are there enough arts teachers?

CPS has about 800 or so. More than half are in high schools. If you do the math [CPS operates some 120 high schools and some 500 elementary schools], you see that elementaries lack credentialed arts teachers. The fine and performing arts magnet elementary schools get two full-time arts teachers. [At the rest,] you get a lot of half-time positions. We’re trying to hold the line, if not increase, the number of teachers. Arts education is one of those intangibles that attracts a parent and kid and keeps them from moving to the suburbs. Most young families that I’ve talked to, they’d love to stay in the city. But they end up looking at the schools and going, “They don’t have a music program. They don’t have an art program. I’m outta here.”

You talk about moving toward a curriculum based on arts disciplines, like music, rather than temporary projects that work with schools to create programs.

It’s not that these project-based programs have failed; they have just run out of money. The project is over, people who were hired disappear, and new initiatives appear, rather than something sustainable. That’s a model that we’re trying to work against.

What about the plan for an arts high school?

Some leaders from powerful philanthropic organizations are talking very seriously about that. Arne [Duncan]’s vision, I’ve heard him say, is he’d love to have an arts high school in each area.

Like the college prep high schools? Would it be selective?

Exactly. This particular high school would be audition-based. A really high-quality school, like Northside College Prep for the arts, in the Loop area, would be great. So the question is: What about the feeder programs? I just want to produce more kids coming up through elementary school who have a general music education so that when they pick up an instrument in 3rd or 4th grade they can play and sing in tune. They’ll have abilities that they don’t have now because schools don’t have a general [arts] curriculum.

When would the high school open?